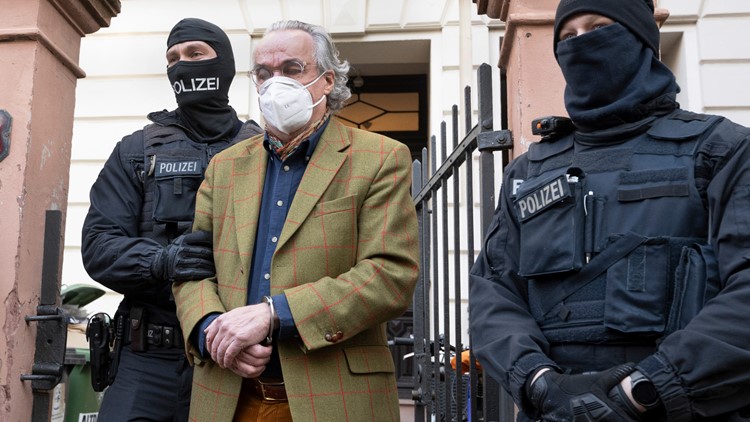 Members of the far-right group reject Germany’s post-WWII constitution and called for a violent overthrow of the government.

BERLIN, Germany — Thousands of police officers carried out raids across much of Germany on Wednesday against suspected right-wing extremists allegedly trying to overthrow the government in an armed coup. Officials said 25 people were arrested.

According to the Federal Prosecutor’s Office, around 3,000 officers carried out searches against supporters of the so-called Reich Citizens’ Movement at 130 locations in 11 of the 16 German federal states. Some members of the movement oppose Germany’s post-war constitution and have called for the overthrow of the government.

Justice Minister Marco Buschmann described the raids as an “anti-terrorist operation” and added that the suspects could have planned an armed attack on state institutions.

German media outlet Der Spiegel reported that the locations searched included the barracks of the German special forces KSK in the southwestern city of Calw. Get the unit Check in the past for alleged right-wing extremist involvement by some soldiers.

The federal prosecutor’s office did not want to confirm or deny the search of the barracks.

In addition to arrests in Germany, prosecutors said one person was arrested in the Austrian town of Kitzbuhel and another in the Italian town of Perugia.

According to the public prosecutor’s office, those arrested formed a “terrorist organization with the aim of overthrowing the existing state order in Germany and replacing it with its own form of government, which was already being set up”.

According to the public prosecutor, the suspects were aware that their goal could only be achieved by military means and by force.

According to the public prosecutor’s office, some members of the group had made “concrete preparations” to storm the Bundestag with a small armed group. “The details (of this plan) have yet to be investigated” to determine if any of the suspects can be charged with treason, they said.

The group is said to belong to a “conglomerate of conspiracy theories, consisting of stories of the so-called Reich citizens as well as QAnon ideology“, says the statement. Prosecutors added that members of the group also believe Germany is governed by a so-called “deep state”; similar unsubstantiated claims about the United States made by former President Donald Trump.

Prosecutors identified the alleged ringleaders as Henry XIII, in accordance with German privacy laws. PR and Rüdiger v. P. Der Spiegel reported that the former was a well-known 71-year-old member of a small German noble family, while the latter was a 69-year-old former paratrooper.

The federal prosecutor said that Heinrich XIII. PR, whom the group wanted to install as Germany’s new leader, had contacted Russian officials to negotiate a new order in the country after the fall of the German government. He was allegedly supported by a Russian, Vitalia B.

“According to current investigations, however, there is no evidence that the persons contacted responded positively to his request,” said the public prosecutor.

The public prosecutor’s office identified another person arrested by the police on Wednesday as Birgit M.-W. Der Spiegel reported that she is a judge and former lawmaker at the Far-right party Alternative for Germany.

The party, known by its German acronym AfD, has seen increasing numbers are being scrutinized by German security services because of his links to extremists.

The two leaders of the AfD, Tino Chrupalla and Alice Weidel, condemned the reported plans, which they said they had only heard about from the media.

“We have full confidence in the authorities involved and call for a prompt and comprehensive investigation,” it said in a statement.

Prosecutors said the group had tasked several members with forming an armed wing alongside a council of leaders, or rat. Under the direction of Rüdiger v. P. they planned to obtain weapons and conduct firearms training.

The raids showed “that we know how to defend ourselves with all our might against the enemies of democracy,” said Interior Minister Nancy Faeser.

“The investigations offer an insight into the depth of the terrorist threat in the Reich bourgeois milieu,” said Faeser. “Only the further investigations will provide a clear picture of how far the coup plans had progressed.”

Sara Nanni, a Green Party MP, suggested the group may not have been very capable.

“More and more details are coming to light that cast doubt on whether these people were smart enough to plan and carry out such a coup,” Nanni said in a post on the Mastodon social network. “The fact is: no matter how crude your ideas are and how hopeless your plans are, even the attempt is dangerous!”

Officials have repeatedly warned that right-wing extremists pose the greatest threat to Germany’s internal security. This threat was highlighted by the killing of a regional politician and the deadly attack on a synagogue in 2019.

Faeser announced earlier this year that the government plans to do so disarm around 1,500 suspected extremists and to tighten background checks on those seeking to acquire weapons as part of a broader crackdown on the far right.

Germany’s Attorney General planned to issue a statement on the case later on Wednesday.