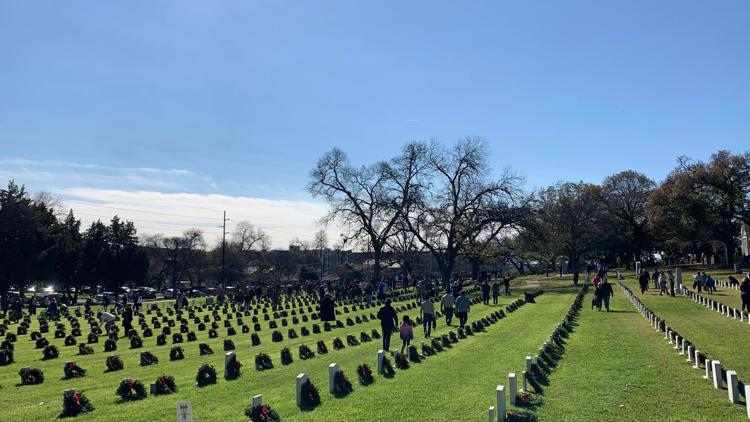 Gov. Greg Abbott attended the ceremony, honoring an 11-year-old boy who helped raise $65,000 for the organization.

Austin, Texas – Day of National Wreaths Across America took place at the Texas State Cemetery on Saturday. This cemetery is one of more than 3,000 sites that also took part in the event, where participants laid wreaths to honor the memory of those who served.

This is the seventh year that Texas State Cemetery has hosted the event, and Gov. Greg Abbott is making his third appearance. Governor Abbott asked everyone to remember the people who sacrificed so much for us.

“There have been men and women who came before us who risked their lives … and lost their lives for the freedoms that we have in this country so that we can celebrate Super Saturdays every day in a way that.” there is no other country in history in the world,” said the governor.

He hopes people will use the day to honor the legacy of these fallen heroes.

In his speech on Saturday, Gov. Abbott also recognized an 11-year-old boy who had been knocking on doors and speaking at organizations to raise money for wreaths across America.

“He raised $65,000 to support Wreaths for America,” Gov. Abbott said. “Maybe someday we’ll call him governor. The truth of the matter is, no matter how much we collect and how much we give, we can never fully repay the debt we owe to all the heroes buried in this cemetery.”

One of the organizers said they had over 700 extra wreaths due to the generous donations. The wreaths were donated to a local cemetery.

https://www.kvue.com/article/news/local/wreaths-laying-texas-state-cemetery-fallen-veterans/269-b19d1498-084a-40bd-9476-3c7e28ea1ec2 3,300 wreaths were laid at Texas State Cemetery for Wreaths Across America Day