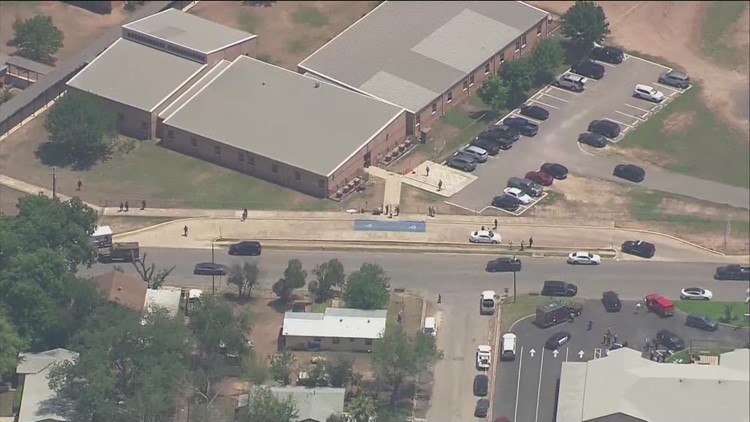 The five police officers were referred to the inspector general’s office for a formal investigation.

UVALDE, Texas — Five Texas Department of Public Safety (DPS) officials have now been referred to the Inspector General’s office for a formal inquiry into their actions during the May 24 Uvalde school shooting.

KVUE and Austin American statesman‘s reporter Tony Plohetski confirmed the five officers were identified as part of an investigation the DPS announced in July. So far, two of the officers have been suspended with salary pending the conclusion of the investigation.

The Office of the Inspector General will now assist in determining whether there have been policy violations in this group, as well as any possible training violations or disciplinary action they may be subject to. Officials have not provided an immediate timeline for this investigation.

Additionally, the DPS released a July letter — read in full at the bottom of this article — directing DPS officials to treat any person firing a gun at a school as an “active shooter until he is neutralized.” ” This person can never be treated as a “barricaded subject.”

During the tragedy, officers waited in hallways for over an hour while the gunman was barricaded in a classroom. In all, he killed 19 children and two teachers that day before officers broke into the classroom and killed him.

“As Texas Department of Public Safety (DPS) Director Steven McCraw explained during his testimony before the Senate Special Committee on Safeguarding All Texans in June, the law enforcement response to the attack on Robb Elementary on 24 Texas DPS said in a statement on Tuesday. “When one officer fails in law enforcement, we all fail.”

On May 24th the citizens of Uvalde experienced one of the worst things imaginable and following this terrible tragedy it is our responsibility to examine what could have been done differently to prevent this from happening in the first place. It is not easy to criticize ourselves and others during such difficult times, but we must be willing to do whatever is necessary to help victims and their families begin recovery.

One of the most important things parents can do is talk to their kids about what they hear, see, and share online. After any tragedy of this nature, there are almost always hints from the attacker on social media platforms. Parents, students, teachers, or any member of a particular community all have the power of prevention in their hands by simply reporting suspicious activity or behavior as soon as they see it. DPS analysts and officials have successfully thwarted plans of would-be attackers thanks to information provided by the public; However, the threats to schools are ongoing and we must remain vigilant at all times.

Governor Abbott has taken significant steps to allocate all available resources to support the Uvalde community, but he does not intend to stop. The governor has directed the Texas Education Agency and DPS to standardize how suspicious activity that could threaten our schools is reported statewide using the iWatchTexas app. As a result, more resources are being devoted to improving the public’s use of this important tool. While it’s important to do everything in our power to prevent future attacks, we also need to be better prepared when they do occur.

In public testimony before the Senate Committee on Safeguarding Texas, I stated that law enforcement’s response to the active gunman attack on Robb Elementary School was an abject failure. Every agency that responded that day shares this bug, including DPS. While I remain highly critical of the decision by the Consolidated Independent School District’s senior police officer at the scene to treat the incident as a barricaded issue, DPS and other agencies also need to be held accountable for their actions or inactions. The evidence indicates that law enforcement should have treated this situation as an active shooter event. The Texas Rangers’ ongoing criminal investigation includes investigating the actions of all police officers who responded to the crime scene. This investigation will continue until the District Attorney’s Office in Uvalde is satisfied that they have sufficient information to assess whether any of the responding officers are criminally responsible.

As a public safety agency, we are committed to holding ourselves to the highest standards. For this reason, DPS formed an internal committee to review the department’s response to the Robb Elementary School massacre. Deputy Director of Law Enforcement Services Jeoff Williams chairs the committee, which includes members from the Training Operations Division, the Office of Inspector General, the Office of General Counsel and the Special Operations Group. Members are currently reviewing and investigating the actions of all DPS Soldiers, Special Agents and Texas Rangers who have responded to Robb Elementary to determine if any violations of Advanced Law Enforcement Rapid Response Training policy or doctrine have occurred.

The department has a duty to constantly improve its active rifleman protocols and capabilities. To encourage better decision making and encourage more training in the future, DPS regions are directed to work with our local law enforcement partners to conduct active shooter training and drills in every school district in Texas. In addition, we are in the process of purchasing “Go-Bags” with breach gear and ballistic shields for all DPS officers.

DPS will continue to adopt the ALERRT doctrine, but with one important addition. DPS officers responding to an active shooter in a school are entitled to overcome any delay in neutralizing an attacker. When a subject fires a weapon at a school, it remains an active marksman until neutralized and may not be treated as a “barricaded subject”. We provide appropriate training and guidelines for recognizing and overcoming poor command decisions in an active shooting scene.

Thank you for everything you are doing to protect Texas,
Steven C McCraw
director

https://www.kvue.com/article/news/special-reports/uvalde-school-shooting/dps-officers-investigated-uvalde-shooting/269-f7e8261c-5412-4de8-8f16-45d1daa279f0 5 Texas DPS officers are to be investigated over the shooting reaction to Uvalde