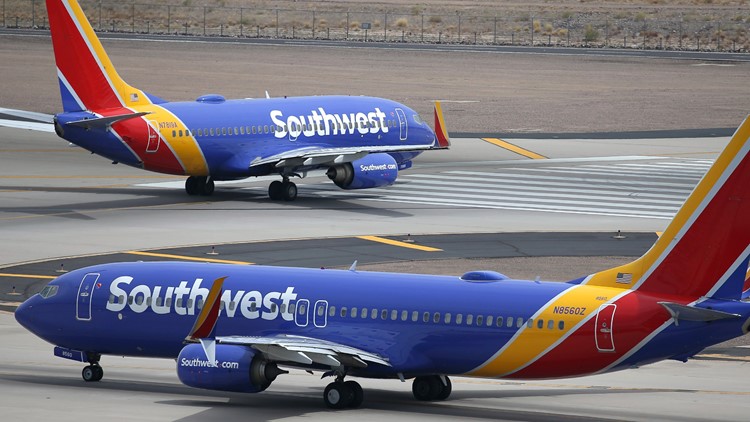 Southwest has blamed the winter storm for its flight woes but has seen massive flight cancellations compared to other airlines.

WASHINGTON — More than 60% of Southwest flights Tuesday and Wednesday were listed as canceled as the airline grapples with massive backlogs amid a winter storm.

Thousands of travelers have been stranded at airports across the country while a violent winter storm has killed dozens across much of the US. Southwest has blamed the winter storm for its flight woes but has seen massive flight cancellations compared to other airlines. Almost 3/4 of all canceled flights in the US on Monday were Southwest aircraft.

Many airlines have had to cancel flights due to the weather, but Southwest was the far leader in canceled flights. About 4,000 U.S. domestic flights were canceled Monday, and 2,900 of those were Southwest flights, according to tracking website FlightAware.

Other major airlines including American, United, Delta and JetBlue suffered cancellation rates ranging from zero to 2% on Tuesday. Southwest Airlines’ cancellation rate was 62%, according to FlightAware, after the airline canceled more than 70% of its flights on Monday.

The US Department of Transportation said it will review flight cancellations. Transport Secretary Pete Buttigieg said on Twitter that he would make a statement sometime on Tuesday, although an exact time has not yet been set.

Trouble in the South West continued on Tuesday and the airline is warning it will operate on a reduced flight schedule for days.

Already, about 10% of Southwest’s Thursday flights have been cancelled.

Southwest spokesman Jay McVay said at a news conference in Houston that the cancellations snowballed as storm systems moved across the country, leaving flight crews and planes out of place

“So we’ve been chasing our tails and trying to catch up and get back to normal safely, which is our top priority, as soon as we can,” he said. “And that’s exactly how we ended up where we are today.”

More than 2,800 other flights had already been canceled in the US as of 7 a.m. Tuesday, and a similar number is forecast for Wednesday.

Passengers stood in long lines trying to rebook their flights. The Department of Transportation said on Twitter it was “concerned at Southwest’s unacceptable rate of cancellations and delays and reports of a lack of prompt customer service.” The tweet said the department would investigate whether Southwest could have done anything about the cancellations and whether the airline is adhering to its customer service plan.

Southwest CEO Bob Jordan told The Wall Street Journal in an interview that the airline would operate a little over a third of its usual flight schedule so crews could get back to where they needed to be.

“We had a tough day today. In all likelihood we’ll have another tough day tomorrow as we work our way out,” he said on Monday night. “This is the biggest event I’ve ever seen.”

Researchers discover the connection between fast food and fatty liver