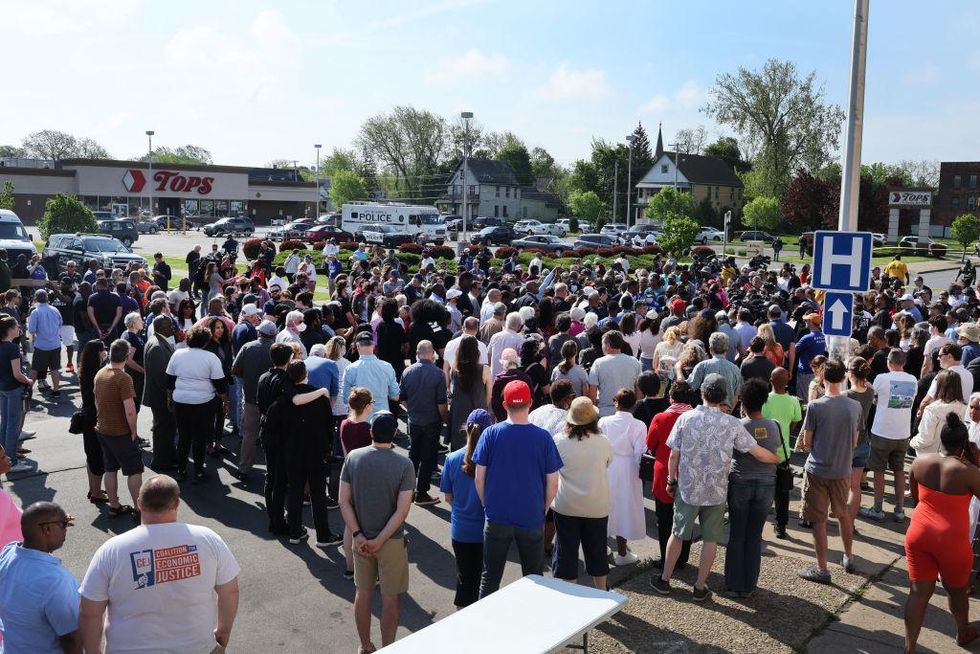 New developments have surfaced in the heartbreaking mass shooting at a convenience store in Buffalo, New York. The tragic shooting at Tops supermarket has been classified as a “racially motivated hate crime” that killed 10 innocent people and injured three others.

Police have named the suspect as 18-year-old Payton Gendron of Conklin, New York. He was charged with first-degree murder on Saturday and was being held without bail. The suspect appeared before a judge while wearing a paper coat as he is on suicide watch. He pleaded not guilty.

A criminal hearing is scheduled for May 19.

“A school official reported that this very concerned young man had made statements that he intended to engage in a shooting, either at a graduation ceremony or at some point thereafter,” said the same government official familiar with the case the Buffalo News.

“FBI officials confirmed that the shooter allegedly intended to commit homicide/suicide upon graduating from high school in 2021 and was taken into custody by the New York State Police and subjected to a mental examination.” abc news reported.

“Federal law prohibits people from owning a gun if a judge has determined they have a ‘mental defect’ or they have been coerced into a mental institution — but an assessment alone would not trigger the ban.” abc news reported.

No criminal charges were brought against the teenager.

The firearms used in the shooting were legally obtained

The suspect legally purchased a Bushmaster XM-15 semi-automatic rifle from the Vintage Firearms shop in Endicott, New York, a few months ago. abc news reported. The suspect allegedly bought another gun at a Pennsylvania gun store and received another from his father.

Sources told the outlet that there was a handgun and shotgun in the suspect’s car.

The daily beast reported that the gun had a racial slur, a white racial symbol and the name of Virginia Sorenson – a victim of the Waukesha Christmas Parade Massacre – written on it.

Suspect may have had manifesto, ‘planned attack for months’

Authorities have yet to authenticate a 180-page manifesto said to have been written by the suspect. The alleged manifesto contained anti-Semitic tropes claiming that the New York Times, CNN and Fox News were run by Jews. The alleged manifesto also focused on the “replacement theory,” a white supremacist doctrine that non-whites will eventually replace whites.

That Daily mail reported that the teenager “planned the attack for months before driving three hours to carry out the heinous ambush, which authorities are describing as an act of ‘violent extremism’ motivated by race.”

The suspect – who is white – allegedly targeted this particular Tops Friendly Market because the neighborhood is predominantly black. All 10 of the people killed were black.

Erie County Sheriff John Garcia told reporters Saturday, “That was pure evil. It was a racially motivated hate crime by someone outside of our community…who came into our community and tried to harm us.”

The FBI is investigating the attack as a hate crime and a case of “racially motivated violent extremism.”

The security guard from “Hero” did everything to stop the shooter

The gunman wore tactical gear, including a helmet with a camera attached, which he allegedly used to livestream the carnage on Twitch – a video game streaming platform. Twitch reportedly removed the graphic content within two minutes.

According to Gramaglia, the gunman fired at least 50 shots during the rampage.

The gunman shot dead four people in the supermarket parking lot – three of them died.

The gunman entered the Tops supermarket and was confronted by a security guard, Aaron Salter Jr. The two fired shots, but the gunner’s body armor protected him. The suspect allegedly shot and killed Salter, a retired police officer.

Yvette Mack, a frequent shopper at Tops, called von Salter: “He cared about the community. He took care of the store. He did a good job, you know. He was very nice and respectable.”

This is Aaron Salter Jr.\n\nBy now you’ve probably heard his story… but it’s one that needs to be told again and again.\n\nThe 55-year-old was the guard, the hero, who shot the suspect \u2014 is trying to stop the monster.\n\nRest in peace, hero, Mr. Salter. pic.twitter.com/eVJP7oOyOV

This morning our focus is on the victims.\n\nThis is Ruth Whitfield.\n\nShe was 86 years old and the mother of former Buffalo Fire Commissioner Garnell Whitfield.pic.twitter.com/kaV1r7xPtx

This is Pearly Young.\n\nShe was 77 years old and a member of Good Samaritan COGIC for over 50 years.\n\nShe was killed by the monster that entered Tops and took her life.\n\nEverybody loved Pearly, including her nephew telling me he’s had \u2018tales of Pearly\u2019 for days.\n\nRest in Peace Pearly pic.twitter.com/BmHH5a8CUX

Read about Kat Massey, a passionate advocate and loving sister and friend. Kat was killed yesterday in #Buffalo. Though her voice—a powerful one she used to use for her community—was silent, her memory will never be forgotten. @TheBuffaloNews

This is Celestine Chaney.\n\nHere she is with her son, Wayne.\n\nWe are working to learn more about Celestine’s life and the kind of person she was.\n\nI told her granddaughter that she it’s on its way to Buffalo to be with her family.\n\nRest in peace sweet Celestine. pic.twitter.com/Tz2UwtZQMQ

Little excitement on the ice for Bruins, but plenty off it