It’s thanks to the construction of Charlotte Wells’ first feature film, Aftersun, that it can’t exactly be described as the story of a young girl (Frankie Corio) and her father (Paul Mescal) vacationing together in Turkey in the late 1990s . It’s a story about a woman Recall the vacation she and her father took together, with both warm clarity and aching ellipses, mysteries likely never to be solved. The forces, flaws and textures of memory guide us through an understanding of Sophie and Calum, together and apart, and the film finds a stunning and visual way to dramatize how each of us ends up becoming the memory of another.

It does this in part with a rave.

Wells joined the Filmmaker Toolkit podcast to talk about creating anchor points for memory in the history of film, the joys of working with DV camcorder footage and the border area it occupies between objective and subjective points of view, and the refinement the perspective and the sense of memory, edit “Aftersun” together, find immediacy within a certain period of time through the look of the film and more.

Listen to the full discussion below or continue reading excerpts from the conversation. To hear these conversations and more from your favorite TV and film creators, subscribe to the Toolkit Podcast through Apple Podcasts, Pocket Casts, Spotify, or Overcast.

Wells on how the story evolved into a story about memory

As the project moved from something more conventional, whatever that means, in story and structure, and into this other thing, this memory thing, there were remnants of that earlier version that endured. And one of those elements that lingered for a very long time was a dramatic tension arising from their relationship.

And the conventional arc of that relationship, as it’s been articulated to me, was when the story starts, their relationship is kind of wrong and tension builds and there’s a rupture, and at the end suddenly their relationship is true, you know? And the second I was told, I realized that was the opposite of what this movie was supposed to be about.

I wanted this relationship to be true from the first frame, that it’s a relationship based on understanding, respect and love, and that doesn’t mean there aren’t any tensions between them at some points. There is, but it’s not the film’s primary tension. And sometimes when you hear feedback that’s not what you’re trying to do, it’s the most clarifying, because a very strong response makes it clear what’s important to you, and sometimes that’s how it has to come around. 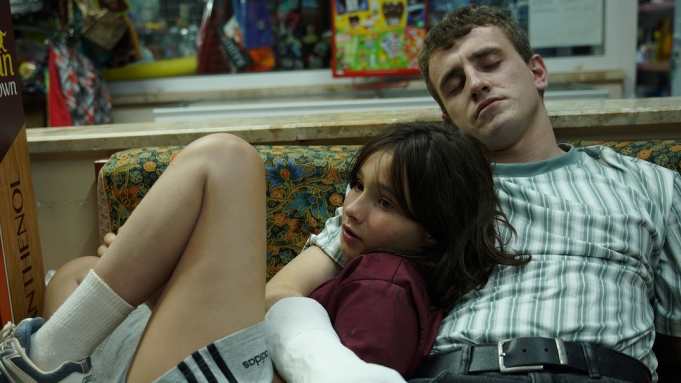 The DV was so special. I remember the first time we met on set, we were testing it out one afternoon at the end of the day, and it was just Frankie jumping in the pool, the scene where she jumps on the [inflatable floater], which was specially scripted. And we had a display on a monitor and you see through that monitor in 2021 in this Turkish hotel on the seafront, this image that really looks like it could be from the late 90’s and it’s so surreal and it is so impressive – at least I think for people my age who have a relationship with this kind of footage, whose own childhood can be captured on this format to some degree.

It was a really special moment and it was very liberating to just put the camera in the hands of the actors. My DP was able to sit back and see what was happening on set for the first time in these sequences and it was just a lot of fun. It wasn’t as free as I had hoped. I only had a picture of the actors and me and in fact there are still a hundred other people standing around and you still have a sun mixer and a boom operator. But there was still a lot of fun and freedom in those sequences. And there are some in the film where Paul, Frankie and I were just roaming the streets of Oludeniz, the city we were in. “Big Head” is the one that ended up in the movie [Calum’s] says she has a big head and she says that’s a bit rude. That wasn’t scripted. It was just them fooling around and it was so much fun capturing them.

I don’t know why I put them in the film. Well I do. There is a tape of DV recordings of me at that age. I play chess with my father and his friend and we all got cut off at the collarbone. So it was just everyone’s bodies but not their heads. And it’s absolutely surreal and totally mundane. My father and his friend are talking about work. Music is playing in the background and it’s just voices and it’s so weird to have that moment on record and I found myself writing it into the film.

The beginning of the script was the beginning of this tape, which is this blurry morphing from white to cream to blue. I assume the cap was on the camera and various objects passed it. And I just wrote exactly how I saw it and it grew on the page and it seemed crazy. But it was also this amazing point of view tool and allowed each character to see each other and then see the rendition of the other’s direct point of view. And it was just a really interesting addition to that aspect of the film and also provided a story or anchor points for memory. These are things that happened at one point. I was wondering if I should do this footage with different actors, which I think would have been crazy so I didn’t do it. But those are the kind of ideas running through my head about how to separate this record from facts, though [it’s] seen through a person’s eye.

Wells on creating textures in film

I think I’m doing well like Edward Yang looking at pictures of “Yi Yi” that are just so perfectly captured and framed and the time that goes into setting up those shots can’t be underestimated become what I think ultimately we did and they are the first to go. They seem unimportant. People are quick to cross them off the recording list if you’re going through your day and not recording what you need. But you need them, and it’s difficult to find the time to capture images that are so important to the film’s texture. And I’ve always seen such images in many cases as existing outside of time and are so essential to this notion of memory. You know you lost your bag in a meadow walking down a corridor to reach your hotel room and somehow that bag is still there because where else would it be? It was interesting to figure out how that fits together once we started editing.

The Filmmaker Toolkit podcast is available on Apple Podcasts, Spotify, Overcast and Stitcher. The music used in this podcast is from the score Marina Abramovic: The Artist Is Present, courtesy of composer Nathan Halpern.