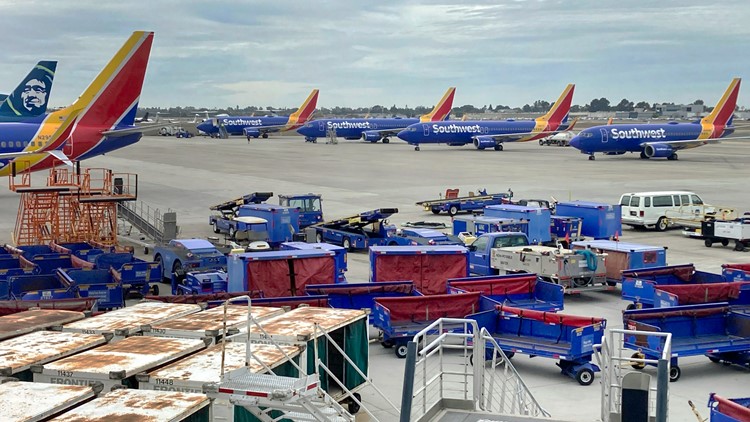 More than 91% of all canceled flights in the US early Wednesday came from the Southwest, according to tracking service FlightAware.

WASHINGTON – United Airlines, American Airlines and others are capping fares in select cities amid nationwide flight cancellations by Southwest Airlines.

The Dallas-based airline struggled to recover from the violent winter storms that battered much of the country over the Christmas weekend. Conditions worsened further at the airline on Wednesday as it scrubbed 2,500 more flights and warned customers to expect more cancellations.

According to the flightaware tracking service, more than 91% of all canceled flights in the US early Wednesday came from the Southwest.

United Airlines announced on Wednesday it would cap fares in select cities through New Year’s Eve, with a focus on the domestic and Latin American markets served by Southwest.

“We continue to get people to their destinations as safely and quickly as possible during this busy holiday season and our latest efforts include capping fares in select cities to ensure our flights are available to as many customers as possible,” said a spokesman for the company in a statement.

Delta Airlines confirmed in a statement that it had set walk-up fare caps, but declined to give details.

In a statement, Alaska Airlines said fare caps are built into its pricing model, but prices have been further reduced in select cities.

While some airlines are capping fares for select cities, some consumers are reporting hefty ticket price spikes.

$7,719 for two economy seats is what @AmericanAir loads out of Chicago in the midst of major travel disruptions.

Price gouging should be illegal. pic.twitter.com/CItFmJCQzA

While addressing a tweet about price gouging, American Airlines confirmed that it also caps fares for select cities.

Exhausted Southwest travelers tried to find seats on other airlines or rent cars to get to their destinations, but many were left stranded. The airline’s CEO said it could be next week before flight schedules return to normal. .

We’re doing our part to get people where they need to be and are capping fares in select cities.

Dallas Airline was scuppered by a combination of factors, including an outdated crew scheduling system and a network design that allows cancellations in one region to quickly cascade across the country. Those weaknesses aren’t new — they helped Southwest cause a similar failure in October 2021.

The federal government is now investigating what happened to Southwest, which carries more passengers within the United States than any other airline.

Forget the Twitter blue tick, Ryan Reynolds can get you the "green tick" for $15