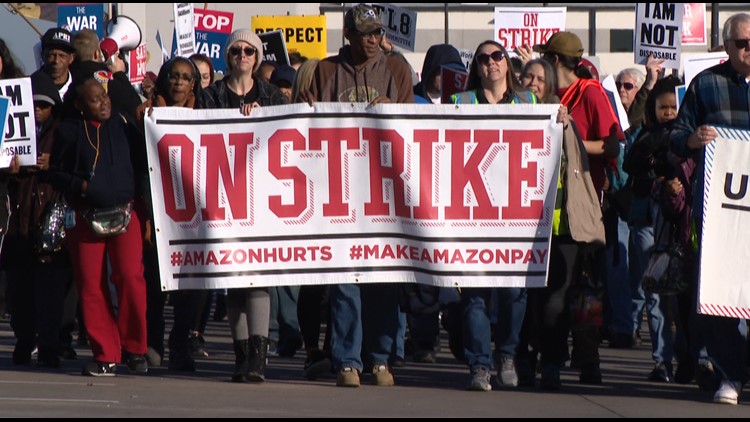 ST. PETERS, Mo. — With a chorus of chants, megaphone messages and drumbeats, dozens of Amazon workers walked off their shift on the logistics center St. Peters, known as STL8 on Black Friday, part of an international strike for better wages and working conditions at the e-commerce giant.

“They make too much money to treat employees the way they do,” said Stacey Cowsette.

“Working here is blatantly grueling,” says employee Alexander Mazella. “We work at least 10 hours a day with a lot of weight and move large volumes. Every week the expectations seem to get higher, but the pay stays the same.”

Amazon has previously said about 3,000 people work at the 90,000-square-foot facility.

Some protesters told us they were concerned about health and safety, with staffer Kayla Breitbarth saying work-related injuries are downplayed or dismissed as pre-existing conditions.

“All these people down here are doing the actual work by literally breaking their bodies and you’re going to keep all the money upstairs? I don’t think so,” she said.

Amazon appeared to downplay Friday night’s strike, with spokeswoman Kelly Nantel making a statement to 5 On Your Side: “Despite a small protest initiated by outside activists, more than 95% of the staff at our St. Peters facility, MO, continue to deliver what they do every day for our customers. As always, we are grateful to our team for their hard work and dedication.”

Breitbarth acknowledged that the crowd represents only a fraction of the site’s total workforce, adding that there are 700 to 800 employees who have pledged to vote to unionize should it come to that.

“We are not children, we are not slaves and we are not robots, so stop treating us for who we are,” she said.

Workers said they would continue picketing when the next shifts reported for work early Saturday morning.

Christina Applegate's appearance as Jen - "Dead to Me" last season 3

Irene Cara, singer of "Fame" and "Flashdance", has died at the age of 63