The similarities between Andor‘s Bix Caleen, played by Adria Arjona (Emerald City), and Hunter of the lost treasure‘s Marion Ravenwood are not insignificant.

Marion was happily running a saloon when a daring man from her romantic past came looking for a favor and appealed to her unique access to certain information.

AndorMeanwhile, ‘s Bix is ​​happily running a junkyard on the planet Ferrix when the swashbuckling Cassian Andor (Diego Luna) comes along and asks them a favor by appealing to their unique access to certain information.

This comparison was new to Arjona but not lost when TVLine spoke to her in the video Q&A above. 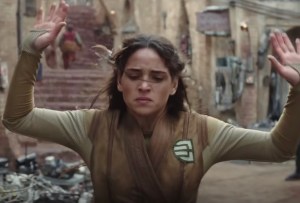 “Yes Bix is shabby” like Marion, the actress agrees. “I like Bix because she’s not afraid to get her hands dirty. She doesn’t lead with fear Everyone.”

Andor takes place five years before the events of Rogue One: A Star Wars Story, which introduced Lunas Cassian as an intelligence officer with the Rebel Alliance. Season 1, which premieres this Wednesday with the first three episodes (of 12), will span a year, while Season 2 will cover the remaining four.

When we first meet Bix in the premiere, the intrepid mechanic has an odd, almost romantic arrangement with fellow co-worker Timm (James McArdle), which Arjona called “stable, supportive, present.” But as soon as Cassian shows up on their doorstep to ask for that favor — amid a rapidly escalating crisis — you can see “they’ve been through a crisis a lot of‘ Arjona previews. “There’s trust that’s been broken, you can feel that tension…. You can feel that too love that they have for each other. But time has never been on their side.”

The other important woman in Cassian’s life at this critical juncture in the Villain One The character’s development is Maarva (played by Fiona Shaw), who first met a young “Kassa” in highly unusual circumstances and on a very different planet.

“Cassian doesn’t trust anyone like he trusts Bix and Maarva,” Arjona confirms. “They are the women in his life, the most important thing to him.”

Press play above to hear more from Arjona on Bix Caleen and her role in the latest Disney+ live action war of stars Series.

wanna scoop on Andoror for another show? Email InsideLine@tvline.com and your question can be answered through Matt’s Inside Line.