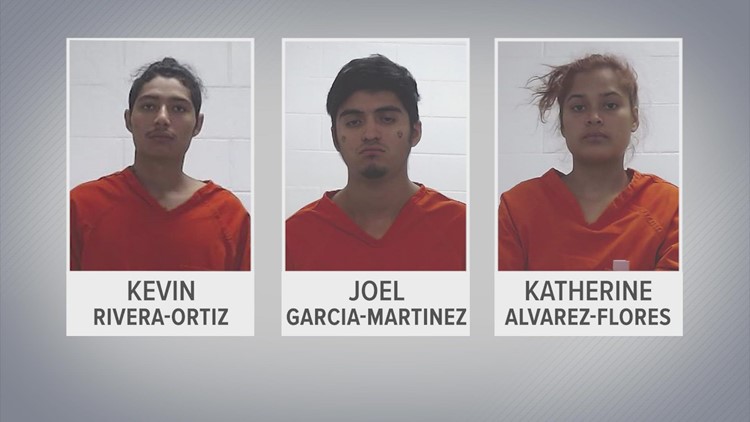 Emily Rodriguez-Avila was found dead on September 4, a day after she texted her family and said friends were picking her up after work.

The Liberty County Sheriff’s Office identified the three defendants as Kevin Rivera-Ortiz, 19, Katherine Alvarez-Flores, 20, and Joel Garcia Martinez, 20. Rivera-Ortiz is her ex-boyfriend, according to investigators

In addition to the murder charge, Alvarez-Flores also faces allegations of tampering.

Alvarez-Flores was arrested a few days ago, while Rivera-Ortiz and Garcia-Martinez were arrested Tuesday in Houston, one in southwest Houston and the other at his place of work. Gang units from the Houston Police Department and Homeland Security were involved in the arrests.

All three were taken to the Liberty County Jail.

Emily Rodriguez-Avila was found dead on September 4, a day after she texted her family and said friends were picking her up after work. Her body was found on the side of a country road east of Plum Grove in Liberty County, which is about an hour from where Niko Niko works.

RELATED: She left work with friends. The next day, the 16-year-old girl was found dead on a Liberty County roadside

She was still wearing her work uniform.

Niko Niko held a fundraiser for Rodriguez-Avila on Wednesday to help her family with funeral expenses.

The aim was to raise enough money for the family to bury the teenager in Honduras, where she was born.

The investigation into this murder is ongoing as investigators attempt to determine the motive.

Reporter Grace White is following this story and will provide an update on the KHOU 11 News at 10:00 p.m

BREAKING: 3 arrests for murder of Emily Rodriguez-Avila, who was last seen leaving work @NikoNikosGreek in Houston. Her body was found on the side of a highway in Liberty County. Investigators say her ex-boyfriend is one of three charged with her murder. @KHOU #KHOU11 pic.twitter.com/foqkgAWCTc

Not much has been shared about Rodriguez-Avila, but some of her friends said she is originally from Central America (Guatemala) and has been in the United States for 10 years. They said she was a hard worker and didn’t go to school.

She continued to live and work in Houston at Niko Niko’s Restaurant and a McDonald’s Gessner Road near Westview Drive.

Friends erected a memorial to her by marking a spot for a cross where her body was found.

The US$1.337 billion Mega Millions jackpot, the third largest jackpot in the US, was claimed in Illinois