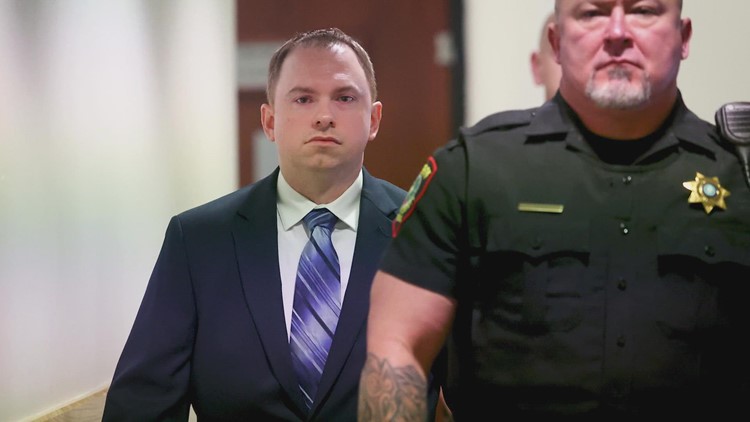 After five days of testimony and more than 13 hours of deliberation, the jury returned a verdict on Thursday. The jury considered murder or manslaughter.

FORT WORTH, Texas — After more than 13 hours of deliberation, a Tarrant County jury found former Fort Worth officer Aaron Dean guilty of manslaughter in the death of Atatiana Jefferson.

Dean was charged in Jefferson’s death in 2019. The former Fort Worth officer shot Jefferson through a window while answering the house on an “open structure” call.

The process lasted five days, with various witnesses for both the prosecution and the defense. Including Jefferson’s nephew Zion Carr, Dean’s ex-partner Carol Darch and several others. Dean also took the stand himself to clear his name.

Dean was charged with murder, but the judge offered the option of considering a lesser charge of manslaughter.

This is the first time in Tarrant County that an officer has been convicted of manslaughter in an incident that occurred on duty.

It has been more than three years since Jefferson’s neighbor James Smith called the police department’s 911 number to check on his neighbor. Smith said the doors to the East Allen Avenue home were open.

Dean answered the call at 2:25 a.m. on October 12, 2019 with his partner Darch. While Smith was filing a welfare check, the call was filed under an open structure call. When he responded, Dean checked the house and said he and his partner believed a burglary was in progress.

Dean said that as he stood at the back of the house, he saw a silhouette deep in the window of Jefferson’s house. He said he could only see the upper arms of the body and believed there was movement.

Dean was visibly shaken during his testimony, telling the jury he began shouting commands to the silhouette: “Hands up, show me your hands.”

After firing a round through the bedroom window, he heard Jefferson scream. He later found her gun on the ground by her feet.

From the moment Dean arrived at Jefferson’s home until he shot and killed her, the entire incident was over in a span of 1 minute and 17 seconds.

Prosecutor Dale Smith hammered Dean over the mistakes allegedly made in answering the call at Jefferson’s home, particularly the fact that he hadn’t seen the “silhouette’s” hands in the window, nor identified to his partner that it was a gun or Start CPR at Jefferson immediately.

“I know you’re crying now, but you didn’t cry when you decided not to give Atatiana CPR,” Smith said during his testimony to Dean.

Several witnesses were called to the stand and broke down what happened that October night with “use of force” experts from both sides, a 911 responder, Jefferson’s sister and especially her nephew Zion.

During the trial, community leaders expressed disappointment with the proceedings, particularly with the prosecutors.

“How can you rest? The three of us go [years] before we try. And you go three days? This is not acceptable. That was poor prosecution work,” said Cory Session, a community activist.

In total, the trial included five days of testimony. The prosecution and defense dropped their cases on December 13. The jury began deliberating just before lunch on December 14 and lasted until 7 p.m. The jury returned for deliberation on December 15 before returning to a verdict on Thursday afternoon.

Andrew Tate says Meghan Markle is 'not even black'.