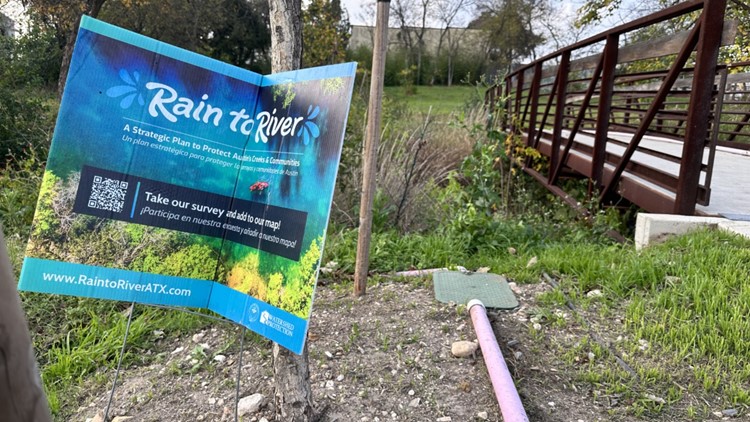 AUSTIN, Texas – Austin city leaders claim they are trying to change what they call “climate injustice,” in part by overhauling the Water Protection Department‘s strategic plan, which will guide its priorities and decision-making for the next decade.

Climate injustice is an issue Frances Acuna knows all too well.

She gave KVUE’s Jenni Lee and photojournalist Dennis Thomas a tour of Williamson Creek in South Austin, east of Interstate 35. Acuna said flooding has plagued it and the surrounding area for years.

Named for the creek, the Williamson Creek Greenbelt is on William Cannon Drive, adjacent to Acuna’s Dove Springs neighborhood.

As the city of Austin works to reduce the risk of flooding for hundreds of homes, an effort that has involved buying up more than 50 homes, Acuna is working to beautify the green spaces. She wants it to look like areas west of I-35.

“…on the other side of I-35 you can see the green belt and it’s beautiful. You see all these amenities. You see dog bags and all that,” Acuna said.

Areas like Bull Creek District Park near FM 360. Springs, trails, and areas for native plants to thrive or growth zones make this one of Austin’s most popular parks.

Battle Bend Park is another renovated green space located on South Congress Avenue in South Austin but just west of I-35. It is complete with a basketball court, play area and growth zones. But east of I-35, Acuna said, “there’s nothing.”

Acuna is there Go! Austin/Vamos! Austin or GAVAa coalition of neighborhoods fighting for just policies and practices for their communities – communities like Dove Springs.

She said it’s GAVA volunteers cleaning up unattended areas, like the Williamson Creek Greenbelt, where garbage from a homeless camp is accumulating, according to Acuna. She said she tried to get help from the city, but the lack of response only made her angry.

“Once one of the council members said to me, you know, ‘Frances, you’re not at City Hall, so you could ask about things.’ We have the West Side taking days off so they can ask for things, so we don’t get anything for not asking,” Acuna said.

Katie Coyne is trying to change that. Coyne is the Environmental Officer for the City of Austin.

“We don’t have fair environmental protection in the city,” Coyne said.

She is also an assistant director for the Water Protection Department. She is responsible for Austin’s environmental policies and said the city became environmentally unfair decades ago.

“…in the 1990s, the desired development zone was established as a result of our Smart Growth initiative, and that increased development pressures on Eastside communities,” said Coyne.

Developments such as the Plaza Saltillo District near East 5th Street in East Austin and west of I-35 the Crestview Station near North Lamar Blvd in Central Austin.

“We also know that environmental protection for the West Side is stricter than anything we have on the East Side. And the historical reason for that was because we wanted to protect our drinking water on the Westside. We also wanted endangered species like the Barton Springs salamander,” Coyne said.

But with that Rain to River InitiativeCoyne said the city is trying to fix past ills.

“There’s a lot of different ways we need to do that,” Coyne said.

First, Coyne said the city recognizes that environmental groups are not on the same playing field.

For that reason, she said the Rain to River plan prioritizes low-income and minority communities. It outlines several outreach strategies, including:

“What work are we not doing that we should be doing? What work should we stop doing?” said Coyne.

The goal is to make more areas look like the JJ Seabrook Greenbelt, which lies between Martin Luther King Jr. Boulevard and Manor Road in East Austin.

With community feedback and involvement, the city completed most of the JJ Seabrook project in 2015. She replaced the culvert with a footbridge, halted mowing along streams to allow for the growth of dense and diverse vegetation, and finally turned unusable green space into an area for many to enjoy.

Frances Acuna is optimistic about the Rain to River plan.

“I see a community garden over there… I see it’s beautiful,” Acuna said.

She just hopes her goal of restoring her neighborhood’s green belt won’t take too long.

The Rain to River initiative is in the listening phase, where city leaders gather feedback from the community. Phase One costs approximately $600,000, which comes from Watershed Protection’s main budget, which is funded by the drainage fee. Meanwhile, the implementation phase begins in two years, but Watershed Protection expects to release an update before then.

You can give feedback here.

https://www.kvue.com/article/money/economy/boomtown-2040/austin-seeks-feedback-as-it-overhauls-approach-to-protecting-waterways-and-communities/269-cf4f2801-7b38-46c3-998e-f45528280620 Austin is asking for feedback as it revisits its approach to protecting waterways and communities

The skin crawling spider movies of all time