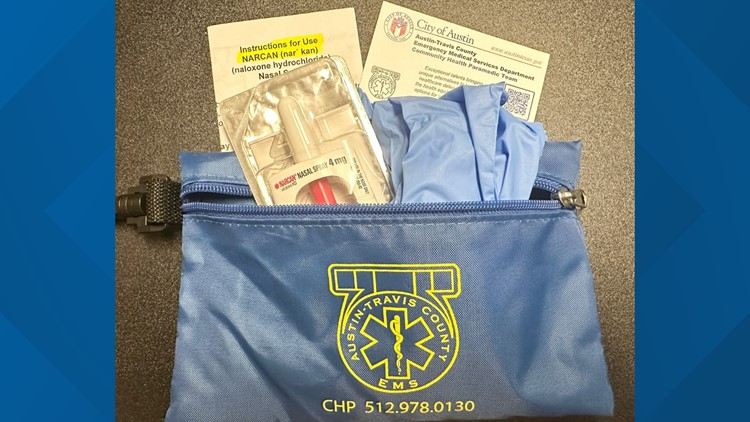 The naloxone in the rescue kits is a simple nasal spray that can be administered by anyone, ATCEMS said.

Austin, Texas – Austin-Travis County EMS expanded its naloxone kit program Tuesday, placing rescue kits on all seven district command trucks for distribution to members of the public at risk of an opiate overdose.

Narcan, or naloxone, is a life-saving drug that reverses the effects of an opiate overdose in minutes. ATCEMS Community Health Paramedics (CHPs) have carried and distributed the kits for years.

“We’ve had tremendous success with our naloxone kit program over the years, and we have both raw and anecdotal evidence that these kits have absolutely saved lives,” said Stephen White, Division Chief of Integrated Services. “In October and November alone, our rescue kits successfully resuscitated 37 overdose patients before first responders arrived, showing just how important this initiative really is.”

All ATCEMS response units carry hospital-grade naloxone for paramedics, but the naloxone in rescue kits is a simple nasal spray that can be administered by anyone. Each kit contains a dose of the life-saving drug and instructions for use. Since the program began in 2018, ATCEMS has distributed more than 2,000 naloxone rescue kits to the public.

“There is no question that this initiative has saved hundreds of lives from potentially fatal drug overdoses,” Chief White said. “This expansion is just another step we are taking to bring these kits into the community and prevent unnecessary suffering and death.”

The ATCEMS CHP Opiate Use Disorder Support Program also operates a highly successful buprenorphine bridge program that aims to both place patients with opiate use disorders into treatment programs and keep them from opiate withdrawal while awaiting placement. A QR code with links to information about all CHP programs is also included in the naloxone rescue kits for those interested in additional resources.

According to ATCEMS, CHPs have seen an increase in opioid overdoses during the holiday season, which is not an uncommon trend but makes the timing of expanding this program much more valuable.

The real star of Glass Onion was snubbed by the Golden Globes, and we want to know why