Carpenter talks to IndieWire about reuniting with James Cameron and fusing the practical and digital visuals of The Way of Water.

When cinematographer Russell Carpenter last worked with director James Cameron, they both brought home Oscars for their work on Titanic. It was a notoriously tedious production, but with their latest collaboration, Avatar: The Way of Water, Carpenter quickly realized he would face more challenges: Not only would he be shooting on and in the water again, he would have to do it learn a whole new language in terms of virtual lighting.

“This was completely new to me,” Carpenter told IndieWire. However, it didn’t take long for him to realize that his basic job wasn’t very different from a traditional live-action film. “It is as always that you shape light. It’s a completely different way of working, but the task is still the same.”

In addition to Titanic, Carpenter had filmed True Lies for Cameron but did not shoot the original Avatar. (Mauro Fiore won an Oscar for his cinematography in that film.) Carpenter’s initial involvement in the sequel began when Cameron asked him to test shoot Spider, the primary human character who needed to be seamlessly integrated with the digital characters created by the visual -Effects Studio Wētā with real performances as reference material. “They set up a forest in the studio that was huge for a screen test,” Carpenter said. Happy with how the footage looked, Cameron asked Carpenter to come to the production a year before filming began so he could coordinate the visual effects of the virtual photography while also preparing for the live-action human elements like Spider.

Proper lighting of this character was Carpenter’s primary concern, as he knew that if Spider didn’t match his surroundings or appear to react to light in the same way as the digital characters, the entire illusion would collapse. “My mantra was, ‘Russell, you have a job,'” Carpenter said. “Getting spiders to inhabit this virtual world while the camera moves like crazy. Your lighting needs to be right because we all know what sunlight looks like or what shadows look like in a forest and if you deviate from that and get something wrong like your contrast or the light not getting where it should be, you get caught up pretty quickly Trouble. The illusion of Spider standing right next to a Na’vi person is starting to fall apart.” 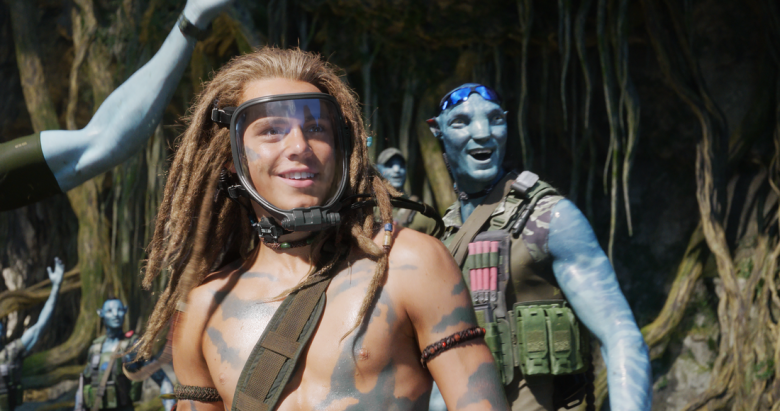 In fact, reality was a guiding principle for all of Cameron’s decisions about the film; Although most of the imagery would ultimately be generated by Wētā computers, the director felt that grounding the world in recognizable physics and behavior would evoke an eerie, dreamlike response in the viewer. This is why he shot his actors underwater, rather than taking a ‘dry for wet’ approach, which is why the actor’s facial expressions and movements needed to be captured rather than simply animated while the performers delivered their work in a recording studio, and why a experienced cinematographer like Carpenter was needed to design the lighting scheme and color palette for the film. “Everything is based on something real,” Carpenter said. “When we have an amazing looking animal in the film, it replicates the locomotion of an animal on our planet so it doesn’t look like some kind of fantasy thing that was created in a computer.”

Carpenter spent the year of virtual lighting feeding Cameron and finding creative ways to get the shots the director had in mind while other departments worked on the same problems. “It was basically a big anthill, and everyone’s trying to stick their feelers together to get the latest information,” Carpenter said. “For me, that experience was so different from, here we are on a set, we shoot for a day and walk away with a really nice scene or a really nice performance. Here’s your guess as to how things will turn out. All of that information—my lighting information, everything Jim was doing—everything was pouring downhill into the real world. A lot of the creativity then is looking at all those charts and saying, ‘okay, what’s the right device for this? How are we going to build the lighting system that’s going to do all the things that we need to do?’”

Behind the Scenes of Avatar: The Way of Water

During the virtual lighting period, Carpenter found that Cameron was very flexible: “He had a bunch of computers and he could just say, ‘I need this. Make this Na’vi a little shorter to make it work for framing. Drag that person here.’ So my gaffer Len Levine and I said, ‘Okay, how do we give Jim that experience when he’s on set?’” Carpenter and Levine developed a system based on rock ‘n’ roll concert lighting and it gave them that made it possible to light up the jungle scenes without wasting time between takes. “It ended up being a kind of Swiss army knife that could morph from one situation to another without taking an awful lot of time,” Carpenter said. By placing moving lights on ceiling trusses and lighting primarily from above, the cinematographer adapted to the needs of each scene and kept his lights from getting in the way of the ubiquitous blue screen.

When Carpenter needed to place light sources in the shots, his collaboration with Wētā visual effects supervisor Eric Sandon streamlined the process of removing them from the final image. “He was on set every day and I could run up to him and say, ‘We made a heroic effort, but we can’t keep that light source out of the shot,'” Carpenter said. “He would say, ‘Okay, that’s not a problem.’ I would only have to ask him: ‘Will you get what you need from me?’ Because two years after I leave, I will no longer be the person at the computer.”

Although there was a learning curve given the film’s groundbreaking technology, Carpenter ended up finding it liberating compared to traditional filmmaking because nothing hindered the relationship between the actors and the camera. “Jim works with a lot of handhelds. He loves to be close and move with the actors and with this system he can basically point the camera anywhere. It’s such a different culture because here’s our set, but on the stage there are all these little compartments with 12 computers scattered around. I wasn’t used to that, and I wasn’t used to that complicated ritual you go through at the beginning of the day where you have to merge what Jim’s camera was doing on the recording tape with the live-action camera. This takes a while, but once you’ve done that, you’re no longer tied to what Jim had in mind. That gave us a lot of freedom.”