Toolkit Ep. 173: Iannucci talks about building a future from our ridiculous present.

While “Avenue 5” revolves around an ill-fated luxury space cruise helmed by a man who doesn’t really know how to fly, the show itself has taken a little journey to make it into its second season create. Having been paused in the early stages of the COVID-19 pandemic, the sci-fi comedy is back with even stranger pent-up lockdown energy and an even sharper grip on the losers and charlatans that often end up taking over the world . Creator Armando Iannucci joined the Filmmaker Toolkit podcast to discuss some new additions to the world of Avenue 5, changes to the set of its titular ship, and the things that never change about the satire no matter what genre one works.

“It was about smaller areas, but more variety. We used our space to create smaller, more intimate environments,” said Iannucci. Some of that intimacy comes from members of the show’s cast actually being crammed into smaller, more claustrophobic spaces, but some of it also comes from the new way Iannucci uses its futuristic setting to explore the many, many flaws of the modern Tearing communication and culture apart. Notable additions include a fictional Prestige version of “Avenue 5” made for audiences on Earth while Avenue 5 is still limping back to the planet, and an Instagram Live-like chat show where reactions drown out the news. The shifts in settings keep Season 2 from feeling smaller, except in all the ways Iannucci wants it to feel like fads and egos keep us from focusing on bigger issues. The result keeps the world of the show (and many of the characters) gloriously petty, but still offers new challenges that Captain Ryan (Hugh Laurie) and his crew will still muddle through to the best of their ability.

Listen to the full discussion below or continue reading excerpts from the conversation. To hear these conversations and more from your favorite TV and film creators, subscribe to the Toolkit Podcast through Apple Podcasts, Pocket Casts, Spotify, or Overcast.

If season 1 is about all the things that go on outside of the ship – things/corpses spinning around them – then season 2 is really about what’s going on inside. Because I think from that shared experience of lockdown where we’re stuck with people for some time trying to fill the day, we’ve been able to draw a lot more from that experience in Season 2 because that’s what they’re all going through on the ship . So [the show] became a lot more real and weird about the reality of it. I know the storylines involve cannibalism and all sorts of things. But I wanted it to feel more claustrophobic. You shouldn’t really notice it right away, but when we came back for Season 2, the corridors narrowed a bit. There was more chaos, you know, that notion of just humans had stopped tidying things up.

In Season 1, people are walking around in their vacation clothes as if they are on their way to do something. In Season 2, the note I gave was “Imagine you’re stuck at an airport and there’s no sign for the flight.” People just sit there, play cards or talk. But it’s not the people walking around excited because they’re on vacation. There are people waiting. You won’t go to the spa for eight years, you know? In terms of story, I wanted to look at the psychological development of the characters rather than the events that happen to them. Rather, it is more about “How do you react to this general situation? And where does that take us?’

In Season 1, after we did one take and there were 50 background artists, people would come and clean up the carpets and stuff before we did the next take. I remember saying to them this time, ‘No, stop it, just leave the mess, leave all the footprints.’ You know I just wanted the place to look like it was well and truly inhabited. I gave the hint that people would have to make the rooms their own. Now they are no longer hotel rooms that you have to leave the way you found them. If you want to paint her, paint her, you know? If you want to hang things on the wall, hang things on the wall. If you want to put things outside, then do so. 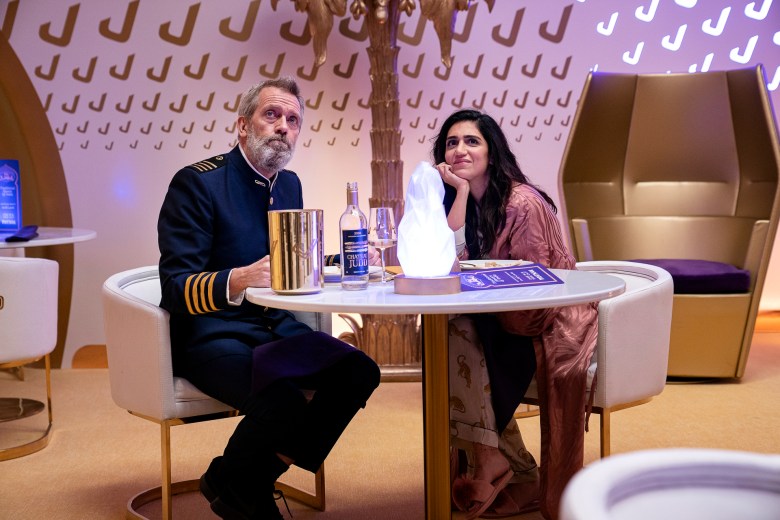 We changed the lighting. We changed the costumes and everything. We gave the dressing a different look on set and the way the sound was recorded – I don’t know the technical term but it’s capped so it’s pumpier and pumps out the music behind it when there’s no dialogue and then step back when there is a dialogue. And so it’s a bit more punchy and [has] just slightly different lenses, a bit more flare and gradation in them and the aspect ratio was slightly different. It’s just that we wanted this idea, which, you know, had a big budget, although the dialogue could have used a little rewriting. I think with all these big shows, the thing that they never spent money on was the script. We have this star, we have this amazing place, we have this rising music, we have this top director. At least a little more time could have been invested in making the dialogue a little bit better.

Iannucci on refining comedy through rehearsals

About two weeks before we start shooting, we have a kind of workshop phase with the actors and the writers. So we’re going to read the script, but we’re going to put the script aside and we’re going to work through the ideas just to see what else comes out, or we’re going to take a scene and talk about it a little bit and think about what else there could be happen and who have we forgotten and how can we bring them in? What a fun way to bring them, all of that. And similar to any guest cast, we encourage you to think ahead about how you view them.

So we could spend one day just looking at the whole Jud/Iris or, you know, Zara setup, or another day we could do the whole Ryan/Billy setup, you know? Again, due to COVID, we had to pay attention to how many people were in the room that day. That was a possibility, and because we’ve broken people into smaller units in these stories, we’re all engaging with each other, but now we’re spending more time on Jud with Mads. It meant we could rehearse with these people in small, discrete blocks. And as the season progresses, you bring the gang back together.

The Filmmaker Toolkit podcast is available on Apple Podcasts, Spotify, Overcast and Stitcher. The music used in this podcast is from the score Marina Abramovic: The Artist Is Present, courtesy of composer Nathan Halpern.