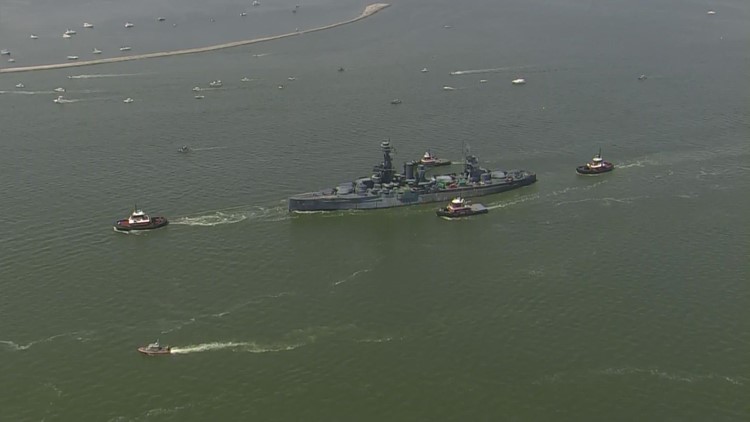 The voyage is part of a $35 million project to repair the hull and eventually restore the ship to its former glory.

HOUSTON – The historical Battleship Texas heads for Galveston from the San Jacinto Battleground Site for much-needed repairs on Wednesday.

Watching the story unfold was such an exciting moment for those who came out to see the battleship on Wednesday morning.

The moment was particularly emotional for Julio Zaccagnia World War II veteran who served aboard the legendary ship.

“Very exciting day … I didn’t think I would ever see a day like this,” he said. “It’s very rewarding for me.”

The veteran is 100 years old and said he served aboard USS Texas from February 1940 to July 1942. He set off with his son on his farewell journey to see the legendary ship.

“I’m glad it’s still afloat,” he said. “Once upon a time there was a real… first class ship when I was on board. I’m glad they’re going to fix it.”

Dan Zaccagni, his son, said he had visited the historic ship since he was 4 years old.

“It’s great that they’re going to restore this ship because it’s in really bad shape. So we’re really happy that they’re doing that,” he said.

The ship is filled with history and memories that will live on.

“It was an honor to be here…really,” Julio said.

Dan said his dad was so excited to see the farewell that he didn’t get much sleep the night before. However, they said it was totally worth it and they are so glad to be witness to the historic moment.

A look from the Battleship Texas Foundation live stream on his trip to Galveston:

One of the best places to catch a glimpse of battleship Texas as she made her way to Galveston was on the Fred Hartmann Bridge via the Houston Ship Channel. However, they were not allowed to stay long as traffic cops urged them to clear the area.

When does battleship Texas move?

Tony Gregory, the President of the Battleship Texas Foundation, said Wednesday the towing of the ship by tugboats and getting it underway was perfect. He said there were problems for the first 15 minutes after the ship was towed, but there were no problems.

Gregory said he expects the ship to arrive in Galveston by 4 p.m

RELATED: The Battleship Texas Foundation announces a shipyard where repairs will take place

The voyage from its longtime berth at the San Jacinto Battleground State Historic Site in La Porte is part of a $35 million project to repair the hull and ultimately restore the ship to its former glory.

Repairing the ship is part of the foundation’s plans to eventually relocate it to a new location in Texas, possibly one of three nearby cities, including Galveston, to attract more visitors and increase revenue.

Getting the ship in for repairs is “the most important step in getting the ship back in top shape,” Gregory said Tuesday as he stood on the ship while workers made final preparations.

The battleship is towed by four tugs at a speed of about 5 knots per hour. The 40-mile journey to Galveston should take about nine hours and will not be without risk as the ship’s hull could leak enough to sink it.

“Once we get going I expect it to be pretty smooth… We feel like we’re prepared,” Gregory said.

Since 1948, the USS Texas has occupied the historic spot in the state where the decisive battle of the Texas Revolution was fought. There it serves as a museum and tourist attraction. The battleship was previously taken to the same shipyard in Galveston for repairs in 1988.

For the past three years, the ship has been closed to the public as the foundation prepares for repairs. In 2019, the Texas legislature approved the $35 million to repair the hull. The foundation plans to make other fixes, which it pays for. All repairs are expected to take up to a year.