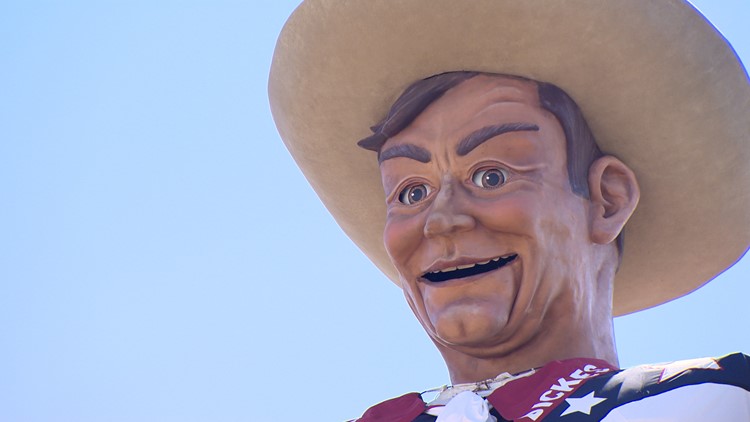 Pinched and tucked and adorned in his best Dickies denim, the 55-foot cowboy is ready to greet the world again.

Yes, it has had a facelift or two.

But after its electronics and animatronics underwent a final check on Thursday, Big Tex was officially ready to make its 2022 debut on Friday.

“Big Tex is a 55-foot cowboy who’s in love with Texas,” said Rusty Fitzgerald, senior vice president of operations at the Texas State Fair. We talked while sound engineers crawled in and out of the basement under 12-foot cowboy boots at the roundabout in front of the Tower Building, which has been Big Tex’s trade show headquarters for most of its existence since 1952.

In case you happen to be new to Texas or new to it Big Tex lorethis “love affair” that Fitzgerald mentions began in the 1950s when the soon-to-be Big Tex was just a very tall Santa Claus in Kerens, Texas near Corsicana.

Created as a beacon to bring people to Kerens for the Christmas shopping season, it fell into disrepair as its novelty faded. The State Fair, which had just adopted a red-plaid cowboy named “Tex” as its mascot, was able to negotiate the purchase of the aging Santa for just $750.

And in various iterations over the years, one revision and improvement after another, Big Tex has stood as guardian of the fair.

Such was his 60th birthday celebration that WFAA’s Cynthia Izaguirre and Greg Fields were lifted into the air by crane to personally present a birthday cake and share a friendly chat with the booming baritone-voiced icon.

But only a week later the time had come.

“I never understood how important he was until the day he caught fire,” Fitzgerald said.

October 19, 2012 was the day an electrical short caught a Big-Tex boot and pant leg on fire.

“I’ve got a pretty big cowboy. All his clothes burned off,” one firefighter said in a now-infamous radio call.

When the fire was out, Big Texas was practically a total loss.

“And as we walked out, people were crying, they had their hands over their hearts. And that’s what struck me right there, that the people of Texas care about this big cowboy,” Fitzgerald said.

But the great cowboy returned the next year. New clothes, a now 95-gallon hat, a friendly facelift, and this year his Dickies-branded shirt with white fringes blowing in a South Dallas breeze.

“Big Tex can look left, he can look right. He can wink, he can blink. He can nod, he turns his head and can look left and right. So Big Tex is doing a lot,” Fitzgerald said of the now 70-year-old icon.

But some people, including someone at my house, are sometimes scared of the big Texan with the booming baritone voice.

“He used to look pretty scary,” Fitzgerald admits of the 1950s and 1960s version of Big Tex. “He had a big wink and a big hooked nose. And it’s kind of softened over the last 70 years. He has a smile on his face and he’s friendly. So she needn’t be afraid. Come out.”

Because the cowboy pinched and hidden and decked out in his best denim is ready to greet the world again.

LAUSD hack: A criminal group is threatening to release sensitive data if the county doesn't pay a ransom

Rings of Power Episode 6: Morfydd Clark on Galadriel and Halbrand