Whether it makes you squirm or sob or contemplate the mere preciousness of existence, here is the best and not-so-best that the new anthology has to offer.

The thing about a cabinet is that not every item inside is going to serve the same purpose. There are knick-knacks that will sit unused for a while. Other pieces are designed to looked at and never touched. Next to both could be some beloved keepsakes that get brought out when the time is right.

Sure, it’s a strained metaphor, but all those really do apply to “Cabinet of Curiosities,” the Netflix collection of horror stories assembled by producer/writer/host Guillermo del Toro. The series has all the double-edged freedom of anthology. Give talented storytellers the chance to bring these stories to life in their own way and you’ll inherently get installments that squish up against each other like puzzle pieces from mismatched sets.

But that’s part of the excitement, too. The promise of “Cabinet of Curiosities” is that, at the start of each story, anything could happen. You could be clicking Play on a masterpiece or something you might forget within minutes of it ending. In this collection of eight there are definitely examples of both.

There’s some impeccable craft on display in a few of these. There’s nothing better than seeing the opening sequences of an episode and knowing that you’re in capable hands. This group of directors is responsible for some of the most memorable horror entries in recent film and TV memory, so even the parts of “Cabinet of Curiosities” that aren’t quite as capable at least have some nugget or kernel of idea worth taking away. A gonzo performance here, a dripping tentacle there, a mystical force hovering over it all: Some stale spices can still add a little flavor to the dish.

So, in the spirit of trying to curate the curation, we’ve made our own kind of collection, ranking them from the disappointing to the undeniably great. Whether you’re looking for a place to jump in or have taken the plunge and are looking for some commiseration, here’s our impassioned, highly unscientific stab at arranging this “Cabinet” with the goodies in front and the less exciting stuff pushed to the back.

(A note: While we’ve tried to stay vague about some of these episode’s fun surprises, those wanting to go into “Cabinet of Curiosities” completely spoiler-free should tread lightly.) 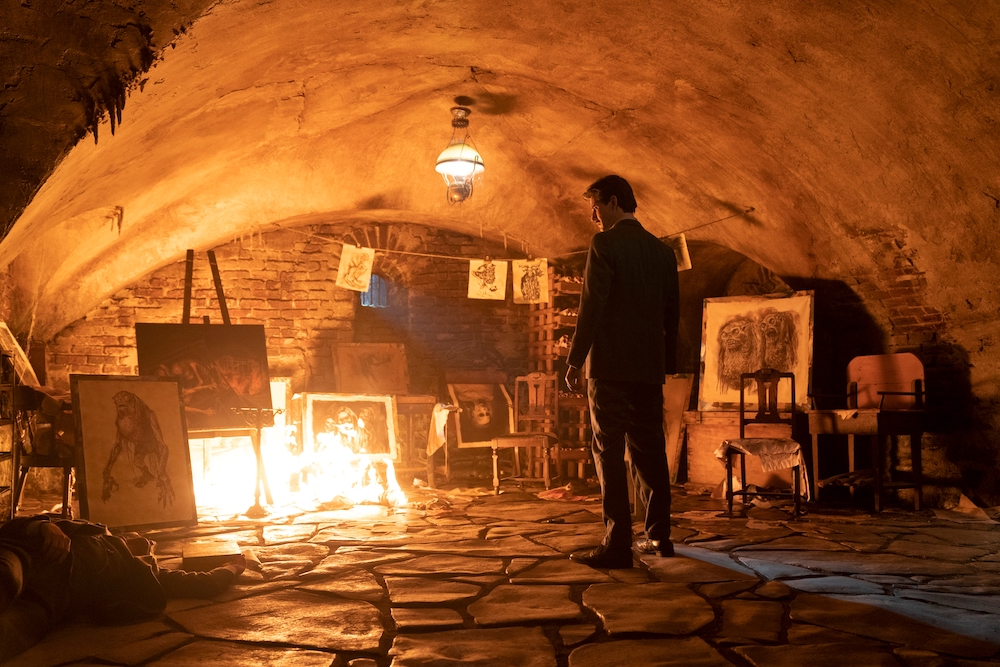 Ben Barnes in “Cabinet Of Curiosities.”

directed by Keith Thomas
written by Lee Patterson
based on the short story by H.P. Lovecraft

For a series so centered on separating nightmare from reality, having an episode that feels like a copy of a copy of a copy feels oddly appropriate. This is the “Cabinet of Curiosities” installment that both tries too hard and not enough, pouring its energy into making an early 20th century story of madness and obsession and getting a final product that induces more shrugs than shocks. Crispin Glover, not one for making conventional performance choices, does make the title painter a memorable foil for the neat and pent-up world surrounding him. But between the endless dream fakeouts and unsubtle dot connecting, this episode is the biggest example of how the horror anthology episode approach of “everything is fine until it very much isn’t” only works if tragic fates happen to characters worth caring about. The biggest piece of evidence: The climactic sight of someone’s really ill-advised self-surgery has just about as much emotional impact in context than it does as the thumbnail of the show’s YouTube trailer. —SG

Tim Blake Nelson and Sebastian Roche in “Cabinet of Curiosities”

Guillermo Navarro works up an especially eerie spin on “Storage Wars” in the regrettably underwhelming “Lot 36.” The ham-fisted morality tale is a baffling choice for an anthology introduction that’s not so much clumsy as it is murderously mundane. The inaugural curiosity follows curmudgeonly veteran Nick — a jaded and pointlessly racist Scrooge type, played by a surprisingly one-note Tim Blake Nelson — as he navigates the sale of some (obviously cursed!) items that he’s recovered from a storage unit liquidation auction. The segment includes a reasonably entertaining last-act monster reveal fitting of a del Toro-involved project (as a matter of design anyway). But the “Lot 36” narrative requires a grinding patience that turns reaching its credits, let alone the rest of the horror collection to stream after, into a serious slog. —AF

6. “Dreams in the Witch House”

Daphne Hoskins and Rupert Grint in “Cabinet of Curiosities”

directed by Catherine Hardwicke
written by Mika Watkins
based on the short story by H.P. Lovecraft

If this feels like one of the more polarizing chapters in the bunch, it’s that the execution of this story feels more Grimm than Lovecraft. In a sea of gothic, dour installments, there’s a fairy-tale spirit to “Dreams in the Witch House” that counterbalances a lot of the rest of “Cabinet of Curiosities.” It definitely has its tropes (ah, a sickly Victorian girl) and traps (an extremely clunky reference to “a vegetarian superman rising to power in Germany”). Yet, Rupert Grint does an effective job of pushing those concerns aside, particularly when his character escapes into the “Lisey’s Story”-like purgatory shadow realm. The episode’s parting shot is a nasty one, even if it’s cribbing from one of the genre’s nastiest moments. But the narrator at the heart of it is like the episode itself: making the most of the odd middle ground between fanciful and horrifying. —SG

Martin Starr and Kate Micucci in “Cabinet Of Curiosities”

directed by Ana Lily Amirpour
written by Haley Z. Boston
based on the short story by Emily Carroll

Suspended in an “Edward Scissorhands” or “Heathers”-esque sort of suburban hell, Ana Lily Amirpour’s adaptation of a story from illustrator and author Emily Carroll centers on a classic Christmas-time tale of envy. Kate Micucci stars as Stacey: a mousey bank teller usually excluded from events with the other women at work, who scores an unexpected invitation to a holiday gift exchange that changes her outlook on life. The underdog protagonist walks away from the soirée with a mysterious beauty product called “Alo Glo”: something the brand’s spokesman (Dan Stevens) promises can make any customer beautiful if they just use enough. It’s a painfully cynical outing with little new to say about the beauty industrial complex, but Amirpour’s spider-like genre manipulation — on dazzling display in the vampiric Western tragedy “A Girl Walks Home Alone at Night” — makes for another unsettling treatment worth getting once. Plus, Martin Starr appears as worried husband Keith: a character most closely resembling John Caroll Lynch’s Norm Gunderson in “Fargo” who is nothing if not alarmingly likable for horror stakes. —AF

Adapted from the 1936 debut work of author Henry Kuttner, the second in the “Cabinet of Curiosities” follows another man deep in debt. Having already made peace with betraying his grieving clients and stealing from their dead loved ones, an undertaker faces off with a pack of rodents he claims is stealing his stolen treasure straight off the corpses still underground. There’s a straightforward-enough message to Vincenzo Natali’s film and that’s “don’t mess with the dead.” Rather than picking apart the meaning in this perhaps no longer necessary cautionary tale (Are grave robbers working these days? Do people even get buried with jewels anymore?), the fun in this installment can be found by watching the writer-director and star David Hewlett surrender to the sinfully silly pitter-patter of rat-infested terror. From gross-out bouts of body horror (Rat! In! Mouth!) to a staggering underground environment reveal, “Graveyard Rats” takes the simple concept of its title to spooky extremes for an almost faultless one-off scare. —AF

Andrew Lincoln in “Cabinet Of Curiosities”

“The Babadook” writer-director Jennifer Kent reunites with star Essie Davis for “The Murmuring,” another dreamlike exploration of maternal regret and grief that’s decidedly more hopeful that their last collaboration but also feels like a fitting companion for the 2014 masterwork. When two married birdwatchers travel to a remote estate to take video and photographs of flocks migrating through the area, a recent tragedy sets the two on edge. Matters are made even more complicated by a mysterious presence and unexplained events seemingly affecting the house and the birds nearby. Davis plays opposite Andrew Lincoln in an understated, but successful supporting performance from “The Walking Dead” alum. The pair tend a smoldering chemistry, nearly snuffed out by loss, for a heart-rending portrait of solitary pain and the risks of emotional isolation. —AF

F. Murray Abraham in “The Autopsy” from “Guillermo del Toro’s Cabinet Of Curiosities”

directed by David Prior
written by David S. Goyer
based on the short story by Michael Shea

“The Autopsy” follows a simple-enough premise: A doctor is sent in to figure out what actually killed the victims of mining explosion. Without being bogged down by all the moving pieces of an hourlong plot, this becomes a showcase for the kind of precision you’d expect from a story told through precise incisions. Prior makes the most out of the tiniest details, be it Luke Robert’s menacing smile, the squelching sound of jostling organs, or the foot pedal controlling Dr. Winters’ (F. Murray Abraham) reel-to-reel recorder. And they’re all presented with the matter-of-fact confidence its protagonist has, even when facing his own death. Of all these stories, this is the one that perfectly harnesses that feeling of seeing something just slightly off, like looking into a stranger’s eyes and seeing them glow a little too brightly. It’s an episode built on tiny, controlled movements, setting the stage for a showdown for the fate of humanity that takes place in the cosmic battlefield of the mind. —SG

Most of “Cabinet of Curiosities” is following characters who have fatally bad ideas. One of the reasons that “The Viewing” works so well is that, for a decent chunk of its runtime, the characters invited to a private exhibition at the home of an eccentric gazillionaire believe they’re going to make it out of the experience with a rad story and nothing else to really worry about. Cosmatos and Stewart-Ahn whip up a central group of artists and scientists, gathered to take in a once-in-a-lifetime evening of ultra-rare booze, coke, and other…indulgences. Before things descend into chaos — when a room in a Cosmatos joint gets drenched in blood-red light, it’s only a matter of time — “The Viewing” is extremely careful about where and when to start dialing up the uneasiness. It’s not just the gory consequences or the way Peter Weller delivers the phrase “shit your mind” or what emerges from the Obelisk Room (or the greatest Michael McDonald smash cut in history). As with all great horror story transformations, it’s the sense that the world as it exists in this shiny, alternate version of September 1979 will never, ever be the same. —SG

All episodes of “Guillermo del Toro’s Cabinet of Curiosities” are now available to stream on Netflix.

Sign Up: Stay on top of the latest breaking film and TV news! Sign up for our Email Newsletters here.