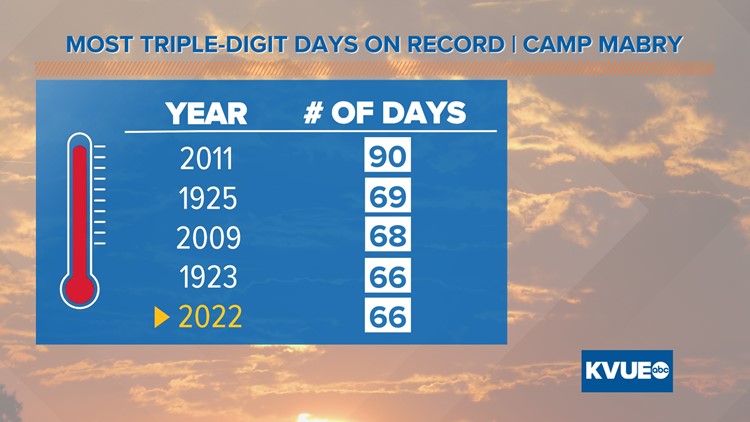 La Niña is the culprit of this unseasonably hot summer, including drier conditions.

TEXAS, USA — Unless you’ve lived under a cave, you know we’ve had such an unseasonably hot summer in central Texas.

It’s important to note that the globe is currently in a La Niña pattern when the Pacific trade winds are stronger than normal, causing cooler water from deep underwater to be drawn to the ocean in a process known as buoyancy surface rises.

A blocking high is forming over the central Pacific as a result of this trend. This pushes moist air into the Pacific Northwest, keeping them cooler and wetter than average.

Whereas we unfortunate folks in central Texas are being let down, quite literally. Not only that, we’re also warmer than average due to the La Niña pattern.

Although climate experts are predicting this pattern to continue for the remainder of the calendar year, there is potential for near-term relief as a weak front line arrives on Thursday that could potentially bring localized heavy rain and thunderstorms, some of which could be on the strong side Side. Rainfall levels could be as high as three inches in spots, which would certainly affect our drought situation.

Also, as the seven-day forecast below indicates, we will mainly have below-average temperatures in addition to precipitation.

Stay tuned to KVUE for the latest information on your prognosis.

American and JetBlue operate some non-stop routes from Austin Airport

Plans to widen Highway 281 are a concern in Blanco County

AP Stylebook clarifies when to use "pregnant women" instead of "pregnant people."