Climate protesters who taped their hands to the floor of a Volkswagen exhibition in Wolfsburg were upset that the carmaker refused to provide them with bowls to defecate and urinate during their protest.

Protesters with “Scientist Rebellion” started Wednesday’s protest, but they didn’t plan what would happen if they had to use the restroom.

“[Volkswagen] told us they supported our right to protest but they refused our request to provide us with a bowl to urinate and defecate properly while we are stuck and turned off the heating. Support persons cannot leave the building”, tweeted one of the protesters identified himself as Gianluca Grimalda.

He went on to clarify that they would be allowed to leave but not return if they did.

“We cannot order our food, we have to take the one provided by Volkswagen. Light off. Unannounced random checks by security forces with bright torches. The police just walked in,” he added second tweet.

among theirs requirements was the insistence that the German government lower the speed limit to 100 km/h, or about 62 miles per hour.

Outside the center. other protesters raised a banner after throwing red paint, apparently symbolizing blood on the pavilion’s steps. 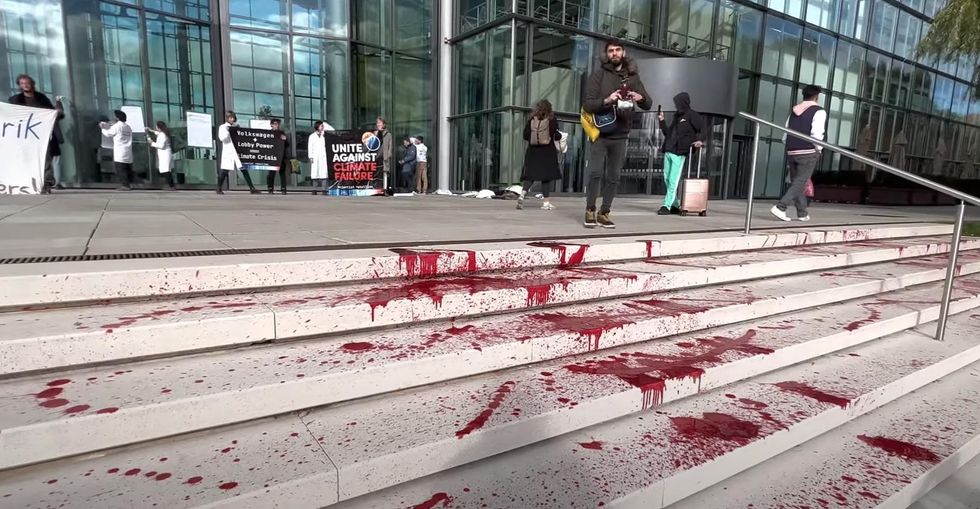 They also smashed the windows.

One of the scientists, identified as Marta Matos, claims that climate change will lead to flooding and storms and some regions of the world will likely become uninhabitable due to global warming in the coming years.

The protesters were mocked and mocked on social media for not planning ahead to meet their bowel needs.

It was unclear how Grimalda could tweet while his hand was glued to the ground.

Here is another video of the protest:


19.10.22 25 scientists from Scientist Rebellion protested at the VW Autostadt in Germany

https://www.theblaze.com/news/climate-protest-volkswagen-defecate-urinate Climate protesters tape their hands to the floor of a car show, angry that Volkswagen won’t bring them bowls to defecate and urinate

'The Crown' trailer with royal disclaimer: 'Inspired by real events'