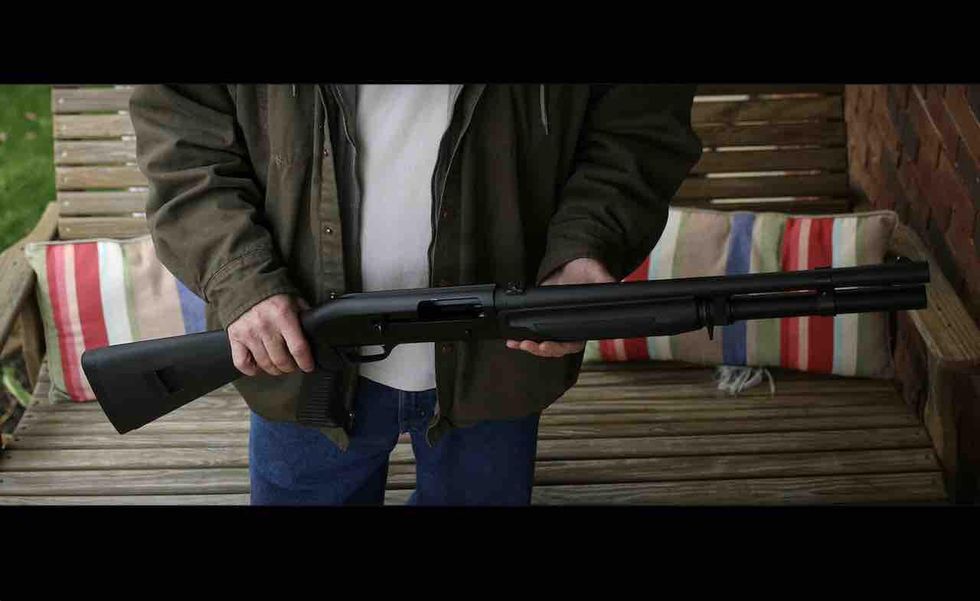 An Indiana homeowner fatally shot two armed intruders who broke into his DeKalb County residence early Sunday morning — and then held a third intruder, as well as a fourth person who was outside, at gunpoint until police arrived.

The crooks and the homeowner weren’t exactly strangers. It turns out the foursome stole cash from the homeowner the day before, WPTA TV reports.

How did all this develop?

The homeowner slept in his apartment on the 1600 block of 8 State Road just outside of Auburn on Sunday, the station said, citing court documents. It was around 6 a.m. when a burglary began, Indiana State Police said WXIN TV.

The homeowner told police he was awakened by his dog’s barking and saw three people in his home — Tabitha L. Johnson, Dylan Morefield and Rameica Moore, WPTA said.

The homeowner said Morefield and Moore threatened him and at times held a gun to his head, the station said, adding that all three began stealing items from his home and demanding money, the station reported.

But he reminded them they took all his money the day before, so the homeowner told police they forced him to write an unnamed check for $500, WPTA said.

A fatal turn of the tables

The homeowner said he was able to retrieve his shotgun, and he fatally shot Morefield and Moore, the station said. The coroner confirmed the couple died from their injuries, WPTA reported. Moore was 36 and Morefield was 22, state police told WXIN.

The homeowner said he got the third burglar — Johnson, who is 42 — out of his home, where he found another man, 42-year-old Shaun T. Kruse, WPTA said.

He said he held the pair at gunpoint and told Kruse to call 911, the station said. The homeowner said his home phone was vandalized and his cellphones stolen before he could call for help, the WPTA reported.

What happened the day before?

Turns out he knows Johnson — the third burglar — as she’s stayed with him on occasion for the past decade, and she’d sent the homeowner a note saying she needed $3,000 because “some bad people thought she would have stolen it from them,” reported WPTA.

The homeowner told police he had only $65 in cash with him Saturday, which the group took away, the station said. He added to police that they wanted him to go to the bank and get money and continued their threats but eventually left because his bank was closed on Saturday, WPTA said.

Kruse admitted to police that he drove Johnson, Morefield and Moore to the victim’s home on Saturday, the broadcaster said, citing court documents. Kruse added that while Morefield and Moore were there, they engaged in a confrontation with the homeowner to get money from him, and Morefield was the attacker, WPTA said.

Kruse said all four met later Saturday and discussed returning to the victim’s home to get more money and take his car and other belongings, the station said.

When the foursome returned to the house, Morefield “kept talking about being gangsters,” Kruse told police, WPTA reported. Morefield also asked Kruse to sit in the driver’s seat while he and Johnson and Moore entered the home, the broadcaster said.

Kruse said the three began bringing stolen items to the car, but shortly after, the homeowner came out with a shotgun and told Kruse to call 911, WPTA said.

Police added that Johnson admitted to being at home both days and said she was trying to get her belongings from the house, the station said.

Kruse and Johnson face two counts of murder and burglary with a deadly weapon, the WPTA said. In Indiana, people can be charged with murder if a death occurs while they’re committing a crime — even if they didn’t actually commit the murder, WPTA reported in a separate story. Indiana State Police are investigating, the station added.

The homeowner is not currently facing criminal charges, police told the WPTA.

https://www.theblaze.com/news/homeowner-fatally-shoots-two-intruders Crooks steal cash from a man and break into his house a day later. But this time, the victim shoots two of them dead and holds two others at gunpoint until police arrive.