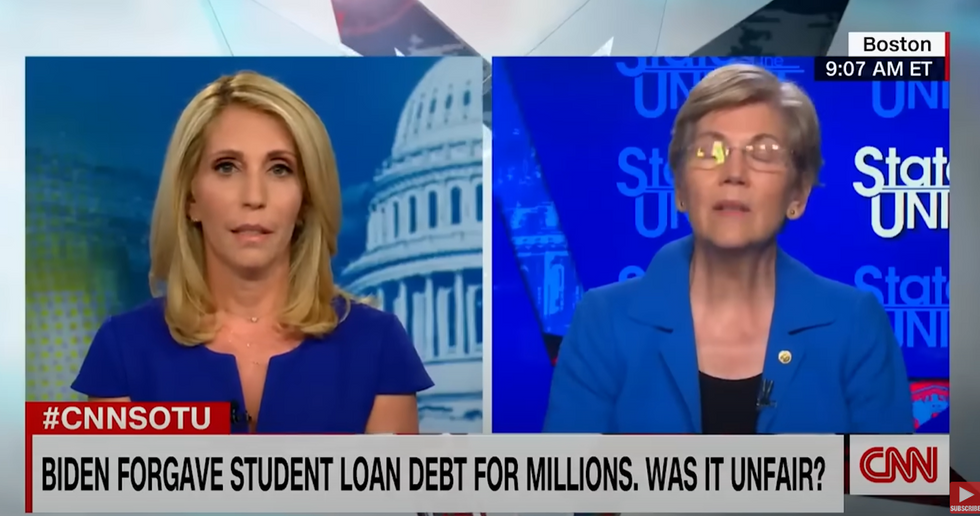 CNN’s Dana Bash asked Sen. Elizabeth Warren (D-Mass.) this week on State of the Union if she thought President Joe Biden’s student loan forgiveness plan was fair to the Americans who worked hard on it to repay their debts, or not to go into debt in the first place. Warren thought she managed to confuse and distract her host (and her audience) with the usual exuberance of overly emotional theatrics, but Bash flipped the script and surprised Warren with a simple statement.

When asked what she would say to people who think student loan forgiveness is “really not fair” and that the government doesn’t help people with “other struggles,” Warren began with a sobbing story about her “daddy,” who “ended up as a janitor” and had no money to fulfill her dream of becoming a “public school teacher”.

“But I found a public university that cost $50 a semester, and for a price I could pay for a part-time job as a waitress, I did a four-year diploma. I became a special education teacher and it opened a million doors for me. That opportunity does not exist for any of our children today,” Warren preached.

“Our public education system no longer creates opportunities for children like me and other children whose families cannot afford to write a check. Instead, we’re telling these young people you need to get an education, but we’re going to wrap the chains of debt around you, and for many, you’ll be paying them for decades, including garnished Social Security checks. This is not the America we want. We want to be an America opportunity,” she continued.

After a few seconds of stunned silence (along with a priceless look like a deer in headlights), Warren pulled it together to blame the college’s exorbitant costs on someone else — in this case, the American taxpayers.

“Well, look, part of what [student loan forgiveness] it’s the debt that’s built up because the cost of college has gone up because taxpayers have invested less in our public colleges and universities,” Warren stammered.

BlazeTV host Dave Rubin shared a clip from the interview on The Rubin Report. Watch the video below. Can’t watch? Download the podcast here.