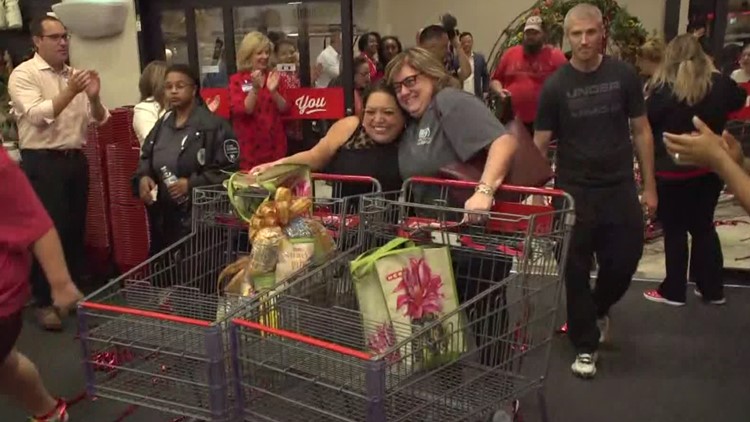 This was the HEB experience that finally arrived at the Dallas-Fort Worth Metroplex early Wednesday morning.

FRISCO, Texas — The first person began staking out at 6 p.m. Tuesday, a full 12 hours before the doors opened. And as the night wore on, more and more joined them until the line stretched the full length of the 111,000-square-foot store.

This was the HEB experience that finally arrived at the Dallas-Fort Worth Metroplex early Wednesday morning.

The surrounding North Texas cities have long had a HEB, the popular South Texas-based grocery chain, but none of our area’s four largest counties had a location.

Not before 6 a.m. Wednesday.

THE DAY HAS ARRIVED!

at 6 a.m., @HEB will open in Frisco and already have a line to receive their special brand milk, ice cream, meat and more.

A food giant in all of Texas, this will be the first in the Metroplex, although 8 more are under construction in DFW.#IAmUp pic.twitter.com/loUHVUCzYy

When the doors of the sparkling new Frisco location finally opened at that hour, the first shoppers were greeted with confetti and a marching band. By 7am, the store was packed with shoppers not only taking advantage of the free samples and freebies, but wanting to finally see what all the hype was about.

A HEB executive said he had helped open 200 stores but had never seen a grand opening line like Wednesday morning.

people flow through @HEB Doors in Frisco for the 6am grand opening.

Jennifer Burnison was the store’s first official customer. She and her friend began waiting outside the store around 6 p.m. on Tuesday. Twelve hours later, the doors finally opened and Burnison was greeted with confetti, a marching band and a gift basket.

“As soon as they announced the release date, I spoke to my daughter and we were like, ‘Okay, we’ll be there,'” Burnison said. “We were trying to figure out how early is too early. Black Friday, we’re used to 4am but we kind of felt like we had to be here even earlier for that.”

The Frisco store is located in 4800 Main St near the Dallas North Tollway, will be one of several HEB locations in Collin County.

Literally couldn’t hear the anchors or what I was saying.

Just had to scream and hope.

That was the scene this morning in the @heb Grand opening in Frisco.#IAmUp pic.twitter.com/fULrz6pMYo

The Company has announced plans for stores in Allen (E. Exchange and N. Greenville), McKinney (Custer and Eldorado), Plano (Spring Creek and Preston) and Prosper (Frontier and Dallas North Tollway).

While HEB owns several Central Market stores in North Texas, the company waited decades to launch its flagship brand in the Metroplex, where the grocery market is dominated by Kroger, Walmart and Tom Thumb. Kroger has several locations near the new HEB, and there are also grocery stores at Tom Thumb, Sprouts, and Target. HEB owns land near Bishop Arts.

While there are plans to open stores in other parts of the metroplex, there are none in south Dallas, where neighborhoods still have limited access to affordable, nutritious groceries.

“Opening our flagship HEB format in the DFW area has been an ambitious goal of ours for many years, and the company has a long-term commitment to serving a broad spectrum of customers and communities throughout North Texas,” said Stephen Butt, Board Member of HEB said in a statement.

City officials installed cameras to monitor the river for the first week and said they would adjust light times if necessary.