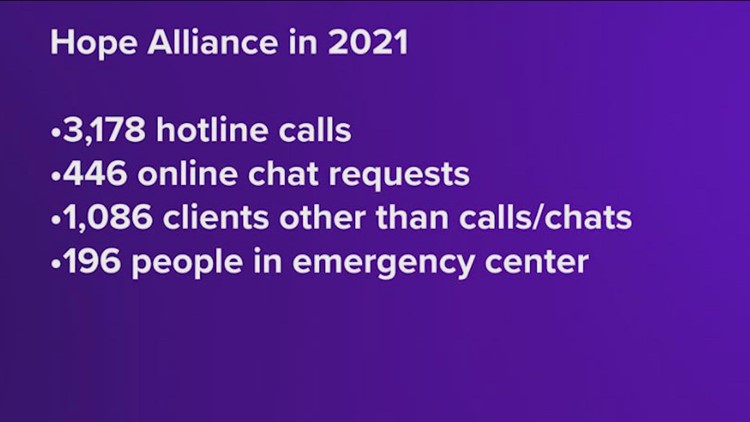 Hope Alliance received more than 3,000 calls to its domestic and sexual violence helpline last year. Due to the growth in the region, it is difficult to meet the demand.

ROUND ROCK, Texas — Stories have power, a power Courtney Petersen once didn’t have when someone else had power over her in 2016.

“There was a time when he just pushed me and banged me against a door and I cut the back of my head open,” said Petersen, a domestic violence survivor. “And that’s sort of the first time I can remember.”

It was the first time she was physically abused by her husband, who was a Round Rock police officer at the time, less than a year ago. But after another incident of physical abuse, Petersen ended up on the other side of the law.

“He ended up getting arrested for a facial print on the bed, which was my face, makeup and blood on the bed, for choking me and biting my lip,” Petersen said.

It took some time for Petersen to realize that even after the arrest, she was not at fault for the abuse. That’s why shared her story in a book that was published last year and by a Lipstick line aim to spread awareness of domestic violence, with stories and resources printed inside each box.

“It’s 10 Women’s Stories about what they went through and what made them leave and the circumstances that allowed them to leave and what they want to share with other women,” Petersen said of the women represented in her lipstick line.

One of the resources listed in each lipstick box is hope alliance in Williamson County, where Petersen received help along with many other people.

“One in three people will be affected by domestic violence,” said Lesa Cantrell, vice president of resource development at Hope Alliance.

Cantrell said they are seeing an increasing number of calls for help from people experiencing domestic and sexual violence.

In 2021, they received 3,178 hotline calls, 446 online chat requests, served 1,086 customers other than calls or chats, and 196 people spent time in their emergency shelter. Cantrell said there are more people in need of shelter, but they’re struggling to keep up with growth in the area because they’re the only agency in Williamson County with an emergency shelter and standalone counseling center. The demand for emergency accommodation is particularly high.

“So for every person we’re serving right now, we’re rejecting one,” Cantrell said. “So we need a bigger facility to accommodate more customers.

As Hope Alliance works to build a larger facility, Petersen works to continue spreading her story to empower others and let them know better chapters lie ahead.

Hope Alliance has two upcoming fundraisers that you can do learn here.

https://www.kvue.com/article/news/local/domestic-violence-survivor-hope-alliance-round-rock/269-c05622f4-1b02-470c-a0a8-34db68496bda Domestic violence survivors are now spreading awareness after being supported by the Hope Alliance in Round Rock