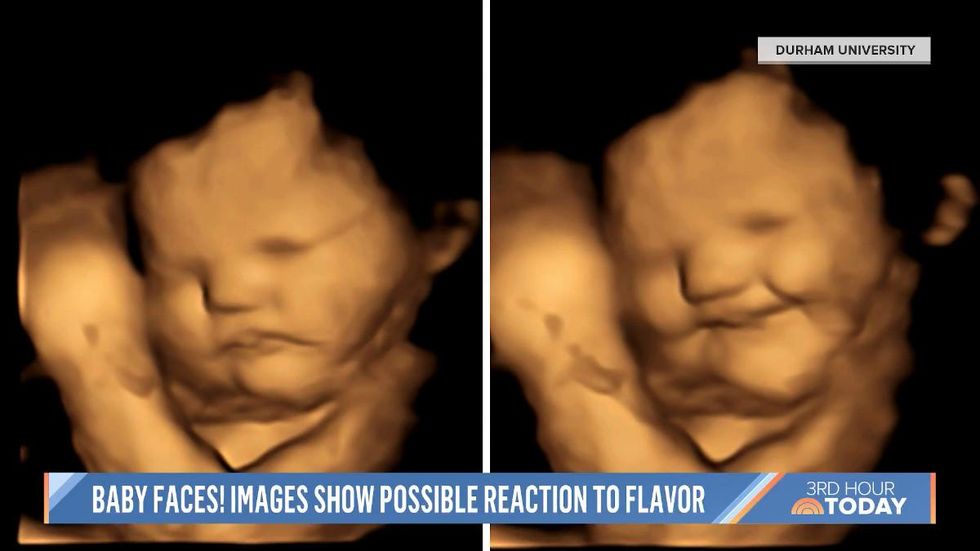 Researchers in England may have confirmed that babies dislike green vegetables before they are born.

A new study offers a look at how unborn children react to their mothers’ food and how they react to different flavors in the womb.

After 20 minutes, doctors used 3D ultrasound to study the babies’ facial reactions as they began to taste what their mothers were eating. Babies whose mothers ate carrots mostly had happy facial expressions, while those who tasted kale frowned or grimaced.

“We are the first to actually show the facial expressions related to the food the mother just ate on an ultrasound image,” said study co-author Dr. Nadja Reissland said NBC News. She is Research Director at Durham University’s Fetal and Neonatal Research Lab.

The women in this study were 32 to 36 weeks pregnant.

Reissland said the ultrasound images suggest babies at this developmental stage had similar reactions as adults to tasting something bitter, but it’s not known if they have emotional likes and dislikes like adults.

The distorted faces on the ultrasound “may just be the muscle movements responding to a bitter taste,” Reissland said.

But she noted that unborn babies have been known to pull faces.

“If you look at it from 24 weeks to 36 weeks gestation, their expressions get more and more complex,” Reissland said.

She told NBC News that kale and carrot powders were preferred to juices or raw vegetables to ensure each participant was consuming the same number of calories. Capsules were used because some expectant mothers hated the taste of kale and the researchers didn’t want their negative reactions to affect their unborn children.

“I had a bunch of people in the lab and I tried to get them to drink kale juice and you should have seen the expressions,” Reissland said.

The capsules also helped preserve the flavor of the vegetables as they digested.

“The bitter taste travels to the small intestine and then into the mother’s blood and then into the placenta and amniotic fluid,” she added. “This process seems to take about 20 minutes, and what you get then is a specific fetal response to that taste.”

The researchers hope that by understanding how babies react to different tastes in the womb, they can suggest diets to mothers that will help their children tolerate different foods when they are young.

“If we can even get it [children] like green veggies and maybe dislike sweets that much, it might help in terms of their weight gain and weight balance,” Reissland said.

The study was featured on the Today show, where the co-hosts gushed over the faces the babies were making.

https://www.theblaze.com/news/even-babies-in-the-womb-may-hate-green-vegetables-study Even babies in the womb can hate green vegetables: study