This weeks diabolical is a literal eye-catcher.

About halfway through the episode, that is Titled “The Demon of Sex,” the title character loses the lower portion of her face as Sister Andrea delivers a stunning spiritual punch. It’s gross — but nowhere near as gross as the backhand move Leland pulls on the small but powerful nun towards the end of the lesson.

Elsewhere, Sheryl has two big wins at work, one endorsed by everyone’s favorite fictional influencer. And Karima has a super-secret solution to Ben’s existential crisis. Read on for an episode synopsis.

MR. & MRS. & HELL FIEND | David is officiating the wedding of Leo and Amalia, two young parishioners who have waited until their marriage to have sex and end up needing counseling less than a week after they say yes. As they talk to Father Acosta, Sister Andrea follows a trail of otherworldly slime (that only she can see) into the conference room, eventually interrupting the newlyweds’ meeting…where there is also a giant demon (again, that only she can see) lurking in the corner. 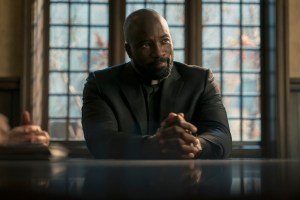 “I didn’t see anything,” David tells her when she asks for a quick chat in the hallway. “Because you’re not that good!” the frustrated nun replies bluntly. (Ha!) She theorizes that there is something obsessive about marriage and joins David’s counsel – which angers the demon. And soon the truth comes out: when Amalia and Leo try to have sex, “we have a physical reaction,” he explains. Leo gets sick. And Amalia has “hives” that look suspiciously like scratch marks on her back and chest. (“Food allergy. I didn’t do that,” jokes the cheeky demon, who also taunts Sister Andrea in this scene.)

Kristen converses with the couple and at first she makes progress – we can tell because the demon starts to deteriorate right in front of Sister Andrea’s eyes. And although dr. Bouchard doesn’t love the nun watching her session, the women agree… which is good because when Leo and Amalia return, the demon is bigger and taunts Sister Andrea by saying she loses.

Kristen advises the couple to “do what your body wants you to do” and encourages them to go with whatever urges come their way. This manifests itself in Amalia hitting Leo in the bedroom one night. He then bites her lip while kissing her, bleeding. Then she grabs a butcher knife from the kitchen and tells him: “F—k me now, or I’ll kill you.” Leo’s in! They set about it, all nausea and skin irritation forgotten, and the demon happily climbs under the covers with them as they consummate their (unholy?) marriage.

ALONE MOTHERHOOD IS GOING GREAT, THANK YOU | While the contractor makes a big jerk off to Kristen and pressures her to sign up for his services while Andy is away in Nepal, Ben weaves his way through the toilet upstairs while Lynn, Lila and Laura watch/color comment. Something begins to tug on the snake like a tuna on a fishing line; The device eventually snaps, slicing Ben’s hand and adding to his pile of suffering. When the Bouchard sisters notice that Ben hasn’t been very great lately, Lynn diagnoses him with “cultural derealization,” or depression caused by the extreme bizarreness of the world. “I think that’s why you’re sad,” she says. “You can’t take it anymore. Things have all gotten weird, and you don’t like it.”

Where’s Lexis, you ask? Oh, she just keeps singing “I’m Evil” in her room, solo, while wearing her mom’s sex wolf mask — regular teen stuff. When Kristen realizes that Lexi’s actions are Lynn’s punishment for Lexis telling Kristen about Lynn’s boyfriend in the previous episode, Kristen is Has. Would have. Enough. She calls an impromptu family reunion and devises a list of 10 commandments for her family to follow “no matter what.” The first entry: “Thou shalt not lie to Mom.” There’s some talk about telling Kristen when Leland approaches and not going into Kristen’s closet, that sort of thing.

At the top, the toilet coughs up an eyeball connected to an optic nerve. Ben looks at it, flushes it and then slowly walks out.

KARIMA FTW! | Ben is holed up in his apartment, which eventually leads to his sister Karima hunting him down and demanding to know what’s going on. “I try to make sense of these cases that don’t make sense, and then we just move on,” he says listlessly. So she tells him to come with her to the “Super Secret Science League,” a gathering of nerds that Ben finds massively unassuming… until they announce that he needs to see if he can blow something up in three minutes, only with materials that can be found in a kitchen. He and Karima complete the task and oh Ben looks so happy!

Later, when a guest speaker is discussing a meteor spewing rocks and baffling scientists, Karima points out that it is possible to believe in science and Believe in Allah. She then volunteers to help him solve his unanswered cases and anything they can’t piece together they take to the League. Because “everything that God has given can be solved,” she says with a smile. (PS I LOVE YOU. MORE KARIMA/SOHINA SIDHU PLEASE.)

Ben’s newfound zest for life is palpable the next time he meets up with David and Kristen. Oh, and he solved one of her old mysteries, that of the girl in Season 1 Episode 2. Recall that she died for a while but came back to life and it looked like an angel was in the footage her room? Ben now believes the picture was taken with an app. I’m glad he’s better, but… an app? We’re good with that, Ben?

KRISTEN TO THE RESCUE | When Leland gets wind of Sister Andrea messing with the demon, he sees an opportunity. So he rushes to the monsignor and tells him that the nun is ill and has hallucinations. “The worry is the liability,” the monsignor later tells David and Kristen, then relies on Kristen’s professional assessment of the aging sister. Seeing the situation for the potential railroad that it is, Kristen cheerfully assures the head priest that there is no evidence of Sister Andrea speaking to anyone imaginary. In the hallway after that, the two women seem to come to terms on the basis of mutual respect.

RAD G TAKES ACTION |But you know who has no respect? The millennials who work at Sheryl’s troll farm/cryptocurrency company, who regularly say “OK, Boomer” to her face and refuse to help her figure out a way to get Makob (the currency’s name) to $135 /Coin instead of the $11 it costs.

But then she gets a very helpful idea from an unexpected source. When Sheryl visits her granddaughters to tell them she’s moving into a house minutes away, she sees the do’s and don’ts list… as well as the ones the girls have come up with to help them survive school. One entry on the latter list – “Influence the Influencers” – was inspired by Melindaz, aka the YouTube-like personality we’ve met a few times, and Sheryl has an idea.

Sitting in Sheryl’s office, Melindaz isn’t too keen on the idea of ​​promoting Makob on her feed. But when Sheryl offers $10,000 upfront and another $10,000 if the price goes up, the ultra-online blonde is all for it. And the plan works! Later, when Sheryl is excited about Makob’s new worth, she calls her uncooperative assistant, Taylor, and the equally grumpy office manager, Bobby, to her office.

Without losing her very pleasant tone, Sheryl asks Taylor to step down. And when Taylor flinches, Sheryl reveals that the chocolates she sent the woman earlier that day contain Brazil nuts – a substance to which Taylor is fatally allergic. Sheryl also stole Taylor’s epipen, and when the assistant starts coughing and rubbing her throat, Sheryl has her sign a resignation letter. Finally, Taylor gasps as she enters the elevator; Sheryl tosses the much-needed medicine into the car just as the doors close. “Everyone has their weaknesses, Bobby,” she says to the amazed office manager. “Don’t make me find yours.” Damn it, Rad G!

Will Smith: Rihanna loved the camera on ‘Emancipation’