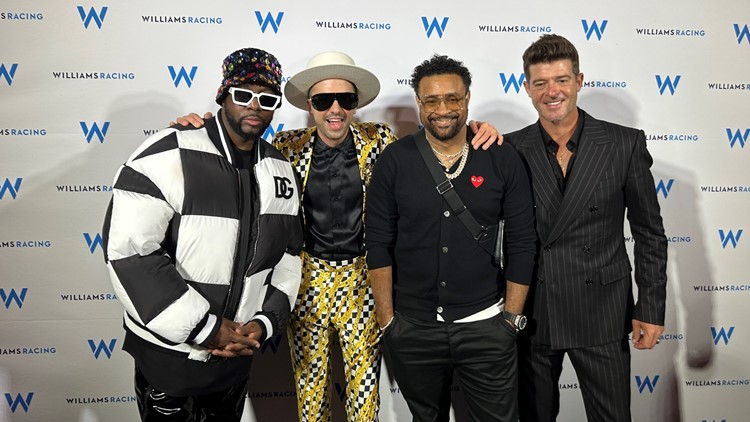 The viral phenomenon brings artists together to sing along to their favorite songs, each passing the mic to the next.

AUSTIN, Texas – For the very first time a Formula 1 racing team hosted a live music event at the US Grand Prix in Austin.

On Friday evening at the start of the Formula 1 weekend, headliner DJ Cassidy, who brought his Pass the Mic series to the stage for a musical performance featuring performances by artists Robin Thicke, Shaggy and Wyclef Jean.

“That’s what we do. We’ve done that all our lives. Post COVID-19 we’re all so excited to just do what we love, standing in front of the fans, no more Zoom gigs. This is exciting,” Thicke said.

The viral phenomenon brings artists together to sing along to their favorite songs, each passing the mic to the next. The series has featured more than 200 popular artists including Missy Elliott, LL Cool J, TLC and Ja Rule.

“I knew right away I was going to call Robin and Shaggy and Wyclef. Being here with all of them is very surreal. you know they are my friends But I will never lose sight of the fact that they are my mentors,” said DJ Cassidy.

The Texas-inspired soiree at the historic ACL Moody Theater was a night where guests could experience all things Formula 1, including the opportunity to meet with drivers from Williams Racing Alex Albon, Nicholas Latifi, Logan Sargeant and 2009 Formula 1 World Champion Jenson Button.

ESPN and F1 announce new US broadcast deal through 2025