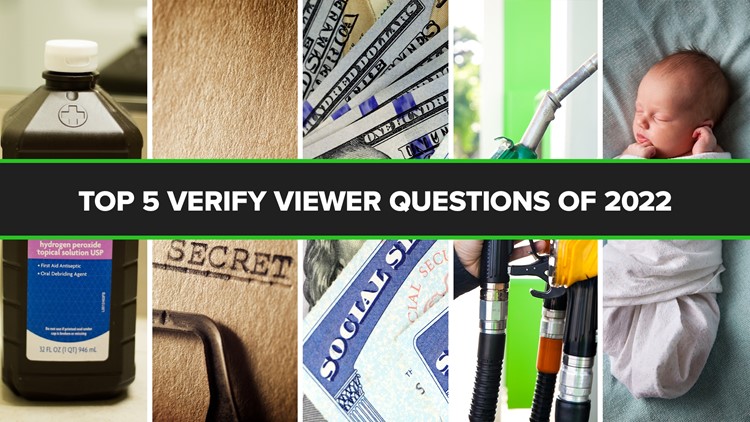 The VERIFY team fact-checked hundreds of questions from our viewers in 2022. Here are five of the most read viewership stories of the year.

VERIFY’s mission is to answer your questions and help viewers understand what is true and what is false. Our viewers have sent us so many great questions over the past year, over Social mediaSMS, email and via our website.

From asking if the US would run out of diesel in 25 days, or if you should be using hydrogen peroxide to treat wounds, the VERIFY team fact-checked hundreds of viewer questions this year.

To look back on 2022, the VERIFY team reviewed the most read stories with questions coming straight from our viewers. Here’s a look at the top five stories:

#5: No, a California law doesn’t allow people to kill their babies up to 7 days after birth

In April, multiple headlines and several social media users claimed that a bill in California would allow people to kill their babies up to seven days after birth. VERIFY viewer Cierra texted our team to ask if these claims were true.

VERIFY noted that California Assembly Bill 2223 (AB 2223) does not allow people to kill their babies up to seven days after birth. Instead, the bill eliminates the requirements for a coroner to investigate deaths related to or following suspected self-induced or criminal abortion in the state of California. AB 2223 also prohibits the use of a coroner’s testimony on a fetal death certificate for prosecution in civil or criminal matters.

These requirements stem from an earlier time, when “abortion was a criminal offense under the California Penal Code, provisions repealed more than two decades ago,” Farah Diaz-Tello, senior attorney and legal director for If/When/How: Lawyering for Reproductive Justice , said.

On Oct. 27, Fox News anchor Tucker Carlson claimed that “by Monday of Thanksgiving week,” or 25 days from now, “there will be no more diesel in the US.” Several VERIFY viewers, including Robert, asked if the US would run out of diesel fuel in 25 days.

VERIFY noted that the metric the TV host and others cited came from data from the US Energy Information Administration (EIA). For the week ended October 21, EIA data showed that the US had diesel fuel supplies for 25.9 days.

But oil experts told VERIFY that number doesn’t mean the US will run out of diesel fuel in less than a month. Instead, the metric measures supply in days when US refiners stop producing oil and the industry stops importing from other countries. It’s calculated by taking US inventory and dividing it by daily demand, explained Houston-based oil expert Andy Lipow.

“We’re not going to run out of diesel in 25 days unless we’ve just stopped production or importing and run down inventories. I don’t know of any government agency predicting that the country will run out of diesel by Thanksgiving,” Lipow told VERIFY.

Patrick De Haan, head of petroleum analysis at GasBuddy, agreed with Lipow. He said claims that the US would run out of diesel in 25 days were “completely inaccurate,” explaining that the figure is “used as an industry benchmark to examine the overall balance of supply and demand.”

#3: Yes, the Social Security cost-of-living adjustment for 2023 is expected to be above average

Social Security provides people with income when they retire or are unable to work because of a disability. Those who are retired can usually start drawing their Social Security benefits as early as age 62.

In July, some people on social media claimed that Social Security payments would increase by as much as 10% in 2023. Ruby and other VERIFY viewers asked our team if Social Security recipients would see a bigger than normal increase in their checks over the next year.

The Social Security Administration (SSA) adjusts benefit amounts each year to account for inflation through a Cost of Living Adjustment (COLA). The COLA is calculated based on the percentage increase in the consumer price index for urban wage and office workers (CPI-W), a measure of inflation measured by the US Bureau of Labor Statistics (BLS). It measures the average change over time in the prices workers pay for a “basket of consumer goods and services.”

#2: Yes, the President can release documents, but there is no set protocol they have to follow

Trump later claimed that the documents were “all declassified” in a post on Truth Social, his social media platform. Many VERIFY viewers, including Beverly and Carole, asked if the President could release documents during his term.

Current presidents can classify documents as long as they “can make a plausible argument that national security is involved”. On the other hand, according to Kel McClanahan, executive director of the National Security Counselors, the president “is not required to provide a reason for the release of information.”

“He can just say, ‘I resolve that this should be released,’ and it will be released,” McClanahan said.

However, Richard Immerman, a historian and professor at Temple University, told VERIFY that presidents generally follow an informal protocol when releasing documents.

#1: No, you should not use hydrogen peroxide on wounds

Hydrogen peroxide is a chemical commonly used to clean, disinfect, and remove stains. It is also commonly used as an antiseptic to treat cuts, scrapes, or other minor skin wounds.

Several people on social media have claimed that hydrogen peroxide should not be used to clean wounds as it can irritate the skin. VERIFY viewer Jehu asked if these claims were true.

The Cleveland Clinic, Mayo Clinic, and Houston Methodist all warn against using hydrogen peroxide to treat or clean wounds because it can irritate the skin.

“Hydrogen peroxide has fallen out of favor as a wound cleanser. Studies have shown that it is irritating to the skin. It can prevent wound healing and can do more harm than good,” said Sarah Pickering Beers, MD, family medicine resident at the Cleveland Clinic.

A blog post on the Houston Methodist website explains that hydrogen peroxide “can kill normal cells in the wound, including healthy skin cells and immune cells, and slow blood vessel formation.”

“Hydrogen peroxide is actually detrimental to wound healing. It prevents healing rather than promoting it,” said Dr. Michael Yaakovian, surgeon and wound care specialist at Houston Methodist. “When you have an open wound, you no longer have the normal skin barrier there to protect you. That exposed area of ​​tissue then becomes susceptible to infection.”

That TO VERIFY Team works to separate fact from fiction so you can understand what is true and what is false. Please consider subscribing to our Daily Newsletter, text notifications and our YouTube channel. You can continue to follow us Snapchat, Twitter, Instagram, Facebook and Tick ​​tock. Learn more “