The ‘Pearl’ director tells IndieWire how he got to — and then achieved — the stunning old Hollywood aesthetic of the ‘X’ prequel.

“X” and “Pearl,” the first two entries in a surprising horror trilogy that concludes with the recently announced “MaXXXine,” couldn’t be more different. “X” is inspired by Gonzo, the gritty filmmaking of the 1970s. “Pearl” looks like it could have been shot by the Freed unit and mimics the three-strip Technicolor process that is inseparable from old Hollywood greatness. However, both films share director Ti West’s love of filmmaking and the attraction that films have on people for better and/or worse.

“Pearl” is a prequel set in 1919, starring Mia Goth in one of the two roles she played in “X” — but the film’s form changes to match the origin story of its title character. It’s one much more tied to old-school shooting styles, where composition, framing and lighting can tell us all about Pearl finding herself on her parents’ farm without the camera having to move an inch. But when it moves, the audience feels it.

West joins the Filmmaker Toolkit podcast to discuss the conscious stylistic and formal choices he made to make “Pearl” such a compelling dive into its heroine’s pursued subjectivity, the other kind of emotional payoff that is required in this psychological horror story, and lots of smudges of red paint .

Listen to the full episode below or continue reading excerpts from our interview.

You can listen to the full discussion above, or subscribe to the Toolkit Podcast via Apple Podcasts, Pocket Casts, Spotify, or Overcast.

I’ve been thinking, well, what cinema – when I’m imagining Pearl’s story – am I imagining it? And I was just thinking about that kind of Golden Age of Hollywood and the kind of tradition like showbiz glitz and glamor and the way formal films were made. That aesthetic appeals to me, aside from the fact that it’s just a story, but that kind of sparked it.

I think the contrast was a big part of it [the appeal]. I think for myself because I knew this story was going to be a psychological story, but it was also going to be pretty crazy at times, and with those kind of wholesome imagery or sort of like childish imagery and those Disney-like flawless imagery, it felt felt like a way to bring something that could be very retro back into the modern age because it would just feel fresh, because I’ve certainly very rarely seen anything that has such an aesthetic applied to a story like this. And that just seemed inspiring. And that seemed like a good reason to get up in the morning and look forward to doing it. That just added another layer to the film.

Otherwise we thought about doing it in this kind of black and white German expressionism. The main reason for this was that it would have been cheaper because we wouldn’t have had to paint anything in any color – everything would have been gray. We would be halfway there. We shouldn’t have polished everything so much. It was inexpensive to do so. And at the time I was looking for something that would make the film inexpensive because it made the idea of ​​making it even more appealing because it looked like the film was really on sale so it would be stupid not to. But credit to A24 for liking the film the way it was. 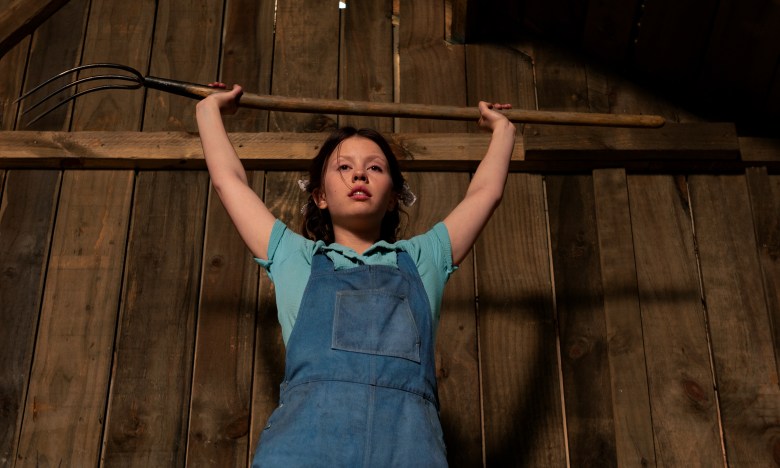 The three stripe color process is a very unique thing. You really can’t recreate it without using it in some way – and we haven’t used it. So you can only get so close. There’s only so much you can do in color grading. You can turn up the saturation and do things like that. And it helps, but it will never get you there. What will get you there is like what’s on camera. And so with the costumes and the production design and everything, we tried really hard to really pay attention to the palette and pay attention to how all the colors fit together and the contrast ratio of the lighting and how we did it. We just had to be very careful about what we were photographing [Technicolor], no matter what. Then you can embellish it in the right color. But basically that’s what we did. I mean, we’ve built in color correction, sort of a three-stripe thing that kind of mimics the separation, but it only does so much. I mean if you looked at the dailies and the final version, the final version is more alive, but it’s not that much more alive.

It was so unique to only make it in 1918. That’s weird [time period] to make a movie. So each prop felt a little strange. And like coming out of “X” three weeks earlier and kinda very rooted in the 1970s. It was a real lucid dream thing, shifting gears like that. But I think once you really engage with the era, the era goes a long way. You know, it wasn’t like they were sitting in front of computers [and the film looked] like that. As soon as you put people in costumes and hairstyles and things like that, it starts to become that world. But yeah, it’s a very lengthy, esoteric process of things where you’re like, “Ah, that’s just not quite right.” You know? And so you always try to get it just a little bit [more perfect] – like, is that red red enough?

Even like the barn for example, if you looked into our office and you saw all the color swatches for the barn on the wall, there were probably 10 of the exact same red swatch but like we were sitting in front of it, like thinking, like, “Hmm . I don’t know.” It was like that scene in American Psycho with the business card. You know, [we] were obsessed with these very idiosyncratic things, but it made a difference because you really had to get it just right to make it feel a certain way. We definitely had a lot of stills from movies on the wall in the office, so that way when people walked into the office – and we did the same thing for “X” – you could see a big wall of images and that kind of get the world you were in. And that could have been anything from “Wizard of Oz” to “The Red Shoes”.

West on how the film tells Pearl’s story

“X” had a more avant-garde approach to the way it was put together, and the camerawork was more modern and effective in the sense that it tried to tell you the story by making the camera move and the camera showing you certain Things. And “Pearl” was more like inside the lockdown, we’ll tell you all. Within the blocking of where the camera is and how the actors move in space, we’re going to add something to the story – unlike “X,” it’s very much like Jenna Ortega running down the stairs. You don’t know the room. She turns on the light, the camera pans to the lightbulb and then reveals something else. It’s just another way of using the camera to tell the story. In that more traditional sense, it’s more like the camera is standing in one place, but Pearl’s mother is chopping wood and putting wood on top [block] and it blocks Pearl, and then when she hits it with the accent, [the chop] revealed pearl.

Doing such more formal things was just fun. I mean, as someone who theoretically likes making films, it’s appealing to do because it wouldn’t necessarily work in every film, but it lends itself to this kind of storytelling. [The movie] was very focused on telling the story within the frame and how the characters move and are placed within it. So, you know, how it’s photographed is relatively simple. They are seated at a table and the way they are seated at the table tells you who is who in this story and maybe there is a fake tree-like background outside the window and the color palette gives you a sense of the atmosphere of what this house is going on inside, and the music sets the tone for you, like the melancholy, how it feels to be in this house. In any film, but especially in this film, you always try to tell as much of the story as possible within the framework.

The Filmmaker Toolkit podcast is available on Apple Podcasts, Spotify, Overcast and Stitcher.