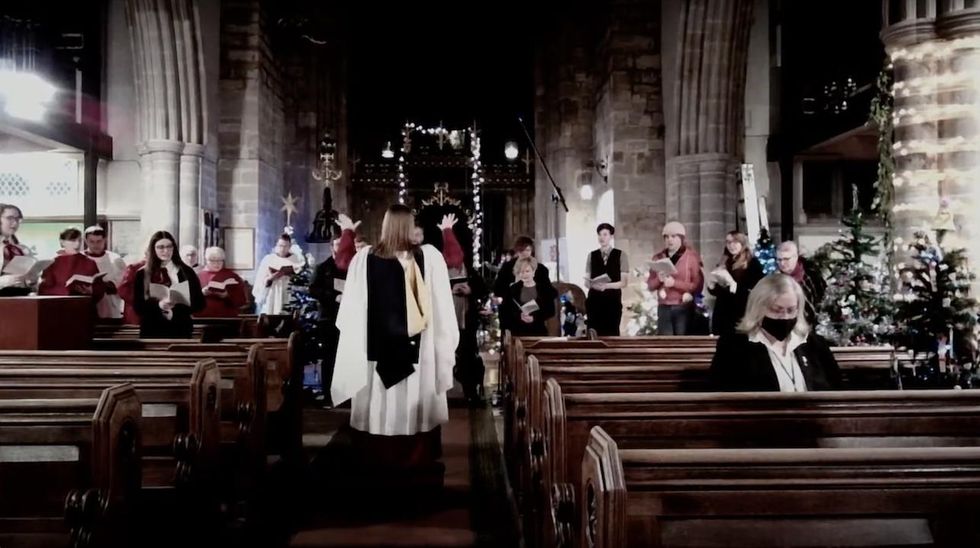 All Saints with Holy Trinity in Loughborough used the updated carol – which removes references to Satan as well as Christ as Savior – and instead refers to “queer and questioning” “women obliterated by men”. MSN reports.

The network added that the changed lyrics were printed in the order of a Monday song service to include “new inclusive words for a traditional hymn”.

According to MSN, the new lyrics read in part:

God rest on you too, women
who were wiped out by humans
Ignored and despised by history
soiled and expelled;
Remember, your stories too
are kept in God’s grace.

The network noted there’s more where that came from:

God rest, strange and questioning,
Your anxious hearts be still
Believe that you are deeply known
and part of the good will of God
So that all live as one in peace;
the global dream come true.

\u201eThe world is going crazy. Thank God for biblically Christ-centered churches. What a travesty \u201c “God rest you, strange and questioning, your anxious hearts are still.” We are ripe for God’s judgment\n

Apparently, this week wasn’t the first time the modified Christmas carol was performed at All Saints. Here is a Video of the church’s 2020 Christmas service, which also featured a chorus blaring:

Mayor’s Parish Christmas Service 20/12/21 at 7pm from All Saints with Holy Trinity, Loughboroughyoutube

Commentators on GB News didn’t seem too pleased with any of this:

The outlet said All Saints with Holy Trinity in Loughborough had been approached for comment on behalf of their rector, Rev Wendy Dalrymple.

In a separate story MSN reports that the altered texts sparked a dispute on social media between traditionalist members of the clergy and the General Synod – the legislature of the Church of England – and LGBTQ activists within the church.

Rev Matthew Firth, a former vicar of St Cuthbert’s and Holy Trinity Darlington in Durham Diocese, told the outlet: “I’m not sure where the lyrics came from, but it seems clear they have been altered to reflect the to fit [Church of England’s] awakened unbiblical agenda.”

MSN said Firth added: “Compare it to the true words. All notions of Christ as Savior were erased. The triumph over Satan’s power has been extinguished. And the whole nativity story is erased.”

Sam Margrave, a member of the General Synod, added that he was “absolutely disgusted” that an “act of worship of our Lord and Savior is being used to advance political ideology.”

But Jayne Ozanne — a prominent gay evangelical Christian and also a member of the General Synod — praised the changed texts, telling MSN: “What an absolutely Spirit-inspired phrase for our time! I love the way this speaks into the pain that the church has inflicted on so many different groups, while still acknowledging that God’s love is so much greater than anything else. May the people who sing it be blessed and restored this Christmas!”

Cardinal Vincent Nichols – the Archbishop of Westminster and president of the Catholic Bishops’ Conference of England and Wales – said Christmas carols should not be rewritten, the outlet said.

MSN said Nichols spoke to Times Radio about the recent trend of rewriting Christmas carols to be more inclusive: “I think what Christmas does… it shows us the importance of ritual. And rituals help us to step out of our own little bubble, to connect to something that we receive, inherited and hope to pass on, and I think those values ​​of continuing the musical repertoire, being able to sing together, contemplating the rituals that have been shaped over centuries are probably more important to me than certain sensitivities that come and go.”

The outlet said the updated lyrics are described online as “new inclusive words for a traditional hymn” on the website of the ResistHarm Movement, a United Methodist movement of “staunch resistance to anti-LGBTQIA+ policy and practice.”

https://www.theblaze.com/news/god-rest-you-queer-and-questioning-altered-lyrics-for-iconic-christmas-carol-sung-at-uk-church-ideology-behind-it-blasted-as-woke-unbiblical “God rest you, queer and questioning…” Altered lyrics for an iconic Christmas carol sung in a UK church; ideology behind it as “woke, unbiblical” blown up

Complete list of Republican senators who voted to pass the 1.7-ton omnibus bill