The Hulu series hints at relevant conversations — about human rights, government failure, and personal responsibility — but has little to say itself.

Over two decades of television, the burden on Elisabeth Moss’ face would permanently disfigure an inferior actor. “Mad Men” pushed Peggy from a surprise pregnancy through bitter battles with a bitchy boss. “Top of the Lake” called her sexual assault specialist. Hell, even The West Wing put President Bartlet’s daughter Zoey under a traumatic kidnapping plot. And then there’s The Handmaid’s Tale, a series that could have been called How To Endure Oppression. For five seasons (so far), June Osborne has been audiences’ ambassador to a world of open misogyny, casual torture and emotional anguish, making Moss’ face our primary translator for often unimaginable depravity. Reed Morano, the Emmy-winning director of season one and visual composer for the series, realized that the intimacy of television could be used to frame June’s plight through extreme close-ups and long, lingering shots to create a deeper connection create a dystopian story.

But five years and 54 episodes later, both the series and its star are reaching their limits. For creator and showrunner Bruce Miller, the cracks have been apparent for at least a few seasons, as repetition and redundancy have been compounded by the tedious nature of a grueling narrative. (One can only see the same bad shit happening to the same good people for so long.) An all-star cast of Emmy winners Ann Dowd, Alexis Bledel, Cherry Jones, Bradley Whitford and Samira Wiley, along with Emmy nominees Yvonne Strahovski, Joseph Fiennes, OT Fagbenle, Kelly Jenrette, Max Minghella, McKenna Grace, and Madeline Brewer can only breathe so much life into scenes that fall in similar territory. (And yes, those are just the awards from the actors This Show.) But Moss, also an Emmy winner for “Handmaid’s,” never backed down. Every time the camera moved a few millimeters from her exhausted, angry, or otherwise expressive face, her resilience, tenacity, or sheer willpower managed to convey considerable meaning.

That’s why select scenes in Season 5 are so quirky to be included out a scene focusing on Moss. At least one instance feels like the actor is simply scraping the bottom of the barrel, looking for a new articulation of hardship in a character that’s been through them all. At other moments, she’s let down by the elements around her: either an awaited bit of exhibition sounds hollow, or June’s inner slurs are trimmed short and redirected into familiar territory, where the burden falls back on Moss to keep them feeling fresh.

Season 5 picks up after June’s revenge on her kidnapper and rapist, Commander Fred Waterford (Fiennes), whom she tore to pieces with her bare hands (and teeth!) along with about a dozen other angry maids. But taking her piece of meat in no man’s land — an area outside of the US or Canadian government — wasn’t enough; June wants the rest of her enemies to know what she did, so she also sent Serena Waterford (Strahovski) his ring finger, wedding ring included.

Such a vehement turn to the dark side is going to require some unpacking – so of course this is the one area that Handmaid hurtles through. Rather than wrestle with her desire for vigilantism, June comes to a quick conclusion that’s never really questioned or considered. Across eight episodes (out of 10 total), she’s tested from time to time, but there’s no tension in each trial because we’ve already seen how June made her choice and the repeated, half-hearted attempts that prompt us to Doubting their beliefs only gets boring after the episode.

Serena’s bow is similarly mishandled. Without getting into spoilers, “Handmaid’s” takes another step towards timeliness by turning June’s safe haven against her. Canada, if you can imagine, is becoming a less than hospitable host, both through the hateful protests of a vocal minority and the questionable decisions of its government. Liberals who, after the Roe v. Wade living in Biden’s America should have no problem identifying with June’s frustrations, fears and, yes, even violence. When you can’t trust the people who promise to protect your basic human rights, going apostate seems like the only viable choice to protect yourself, your family, and future generations. 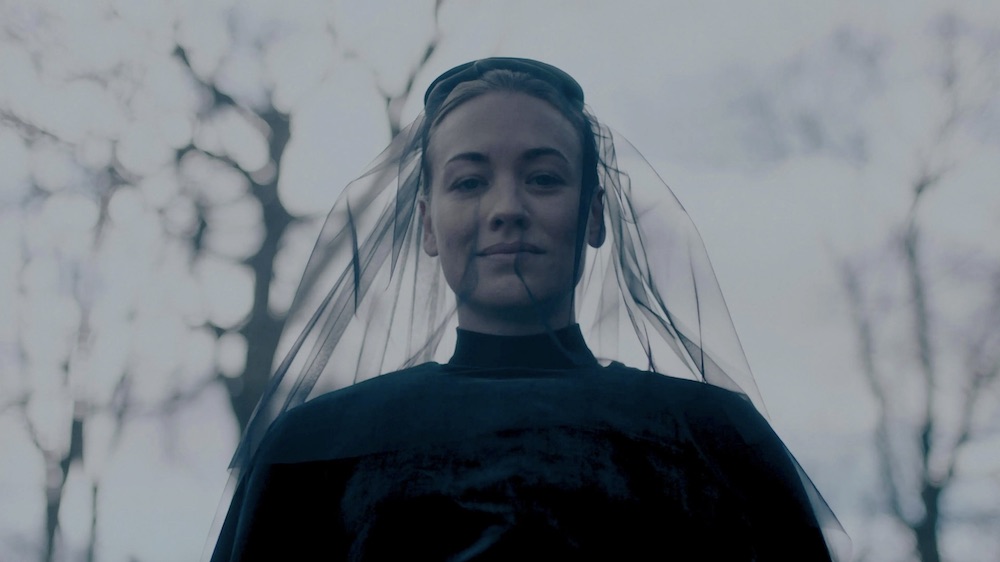 Yvonne Strahovski in “The Handmaid’s Tale”

But even with the ideal narrative set-up provided by Season 4’s ending—June has finally found her desire for revenge, and she “loves it”—the exploration itself has withered and soon unraveled. Season 5 keeps bureaucracy at bay, using it when it comes to getting people in their place and dropping it when it’s impractical. Without seeing the season finale (which by all accounts won’t be the series finale), the story is still full of small resolutions that spoil any kind of anticipation. To say that “Handmaid’s” argues that both sides should just hold hands and sing “Kumbaya” would be an exaggeration — there’s more nuance in its possible take, albeit slightly — but that’s how it can feel for anyone who is still angry, scared and looking for a proper outlet for these feelings.

Overall, the season seems content to point to real-world parallels without getting stuck, and certain characters are similarly distant from the main plot. (Ann Dowd’s aunt Lydia is particularly deserted.) Curiosity is waning, too. The only question left after eight episodes is one that has been asked since the early seasons.

For some, citing limitations in The Handmaid’s Tale is nothing new. The show has drawn on the incredible skills of its leading lady for years, and Moss’s recent roles haven’t always been different from her time in Gilead. (“The Shining Girls,” an insidiously gorgeous Apple TV+ mystery, proved particularly memorable for select Moss fans.) Still others won’t care. Moss remains an aughts-era TV star, worthy of all the recognition and allegiance that stars of the big screen were once bestowed (before superheroes and intellectual property replaced movie stars). But regardless of your impression of the actor tasked with fueling a successful show for a few more seasons, The Handmaid’s Tale spins its wheels in Season 5.

What are reboot cards and how long do they last?