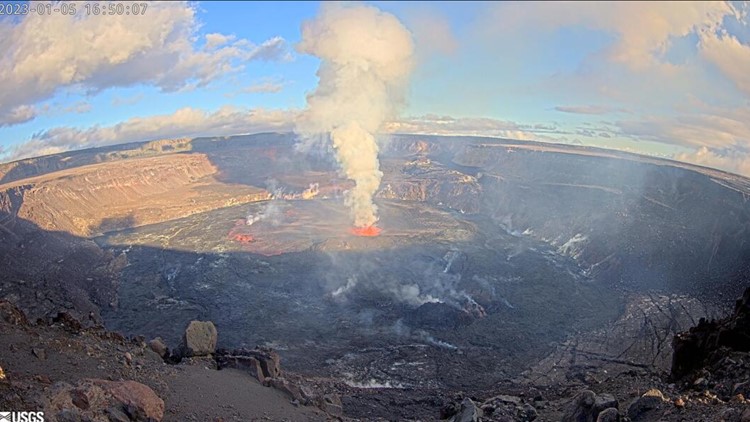 The volcano last erupted for 16 months, beginning in September 2021.

This was announced by the Hawaiian Volcano Observatory in a public announcement that it detected a glow at approximately 4:34 p.m. Hawaii Standard Time (9:34 p.m. Eastern). on the webcam images of Kilauea Summitindicating that eruption has resumed.

The confirmation came less than an hour after the observatory first raised its alert level on Kilauea due to signs of magma moving beneath the mountaintop’s surface.

The summit of Kilauea is located within Hawaii Volcanoes National Park and away from residential areas. This is about 200 miles southeast of Honolulu, which is on another island called Oahu. The location is miles away from the nearest town. The park has closed this part of the summit to the public since 2008.

Kilauea is Hawaii’s most active volcano. It last erupted for 16 months from September 2021. For about two weeks, beginning November 27, two volcanoes erupted side-by-side in Hawaii as Kilauea’s larger neighbor, Mauna Loa, erupted for the first time in 38 years. Both volcanoes stopped erupting around the same time.

Earlier Thursday, the observatory said it saw increased earthquakes and changes in patterns of ground deformation — or the way the ground swells, sinks or cracks — early Thursday morning at the summit of Kilauea.

HOW MANY TIMES HAS KILAUEA Erupted Before?

Hawaiian chants and stories tell the tales of countless eruptions. In Hawaiian tradition Kilauea is home to the volcano goddess Pele.

Kilauea has erupted more than 34 times since 1952. It erupted almost continuously from 1983 to 2018, in some cases sending lava flows covering farms and homes. At the end of that decade-long eruption, Kilauea spewed lava from vents in a residential neighborhood on its eastern flank, destroying more than 700 homes.