Why aren’t red states nearly as red as California is blue? Why is it so difficult to pass legislation against chemical castration, COVID-fascism, illegal immigration and medical tyranny in states with few Democrats in the legislature? Well, unfortunately, in red states it is not so much the voters that determine the arc of legislation as particular interests. And in smaller red states, the chamber of commerce and the medical cartel wield outsized influence, often making red states de facto anti-abortion/pro-gun versions of blue states. Nowhere is this more evident than in South Dakota.

On paper, Democrats are an endangered species in Mount Rushmore state. Not a single one with the label Democrat holds a state office. Republicans control the Senate 32-3 and the House of Representatives 62-8. Sounds like conservative paradise, right? Well, when it comes to abortion and guns, like most other red states, politics reflect the political leanings of the majority of the people. Other problems? Democrats might as well hold a supermajority, especially in the Senate. They simply run as Republicans.

With that in mind, it was shocking to read how Gov. Kristi Noem declared war, not on the RINOs who legislate like Democrats, but on the handful of House Republicans who actually want to distinguish the state from a blue state. Last week’s Argus Leader reported that Noem is taking on a “hands-on” role in training candidates to run for the legislature, including those who will challenge the few Conservative incumbents.

Not considered vulnerable in her elementary school, Noem says she still doesn’t take her party’s nomination for governor for granted. But she manages to find time to get involved in some battlefield legislative contests. She has offered candidate school seminars to aspiring politicians, issued endorsements, and even gone so far as to publicly chastise Republican incumbents with whom she disagrees politically.

For example, last month Noem joined 4th House candidate Stephanie Sauder in a radio show in which she openly accused Rep. Fred Deutsch, R-Florence, of being a bad legislator that harms South Dakota’s way of life.

According to the Argus leader, the governor is also working with Sen. Lee Schoenbeck, the president pro tempore, “to depose far-right members of the party who are seeking re-election.”

Here is a list of target races based on a paper circulated by Schoenbeck and referenced in the Argus Leader: 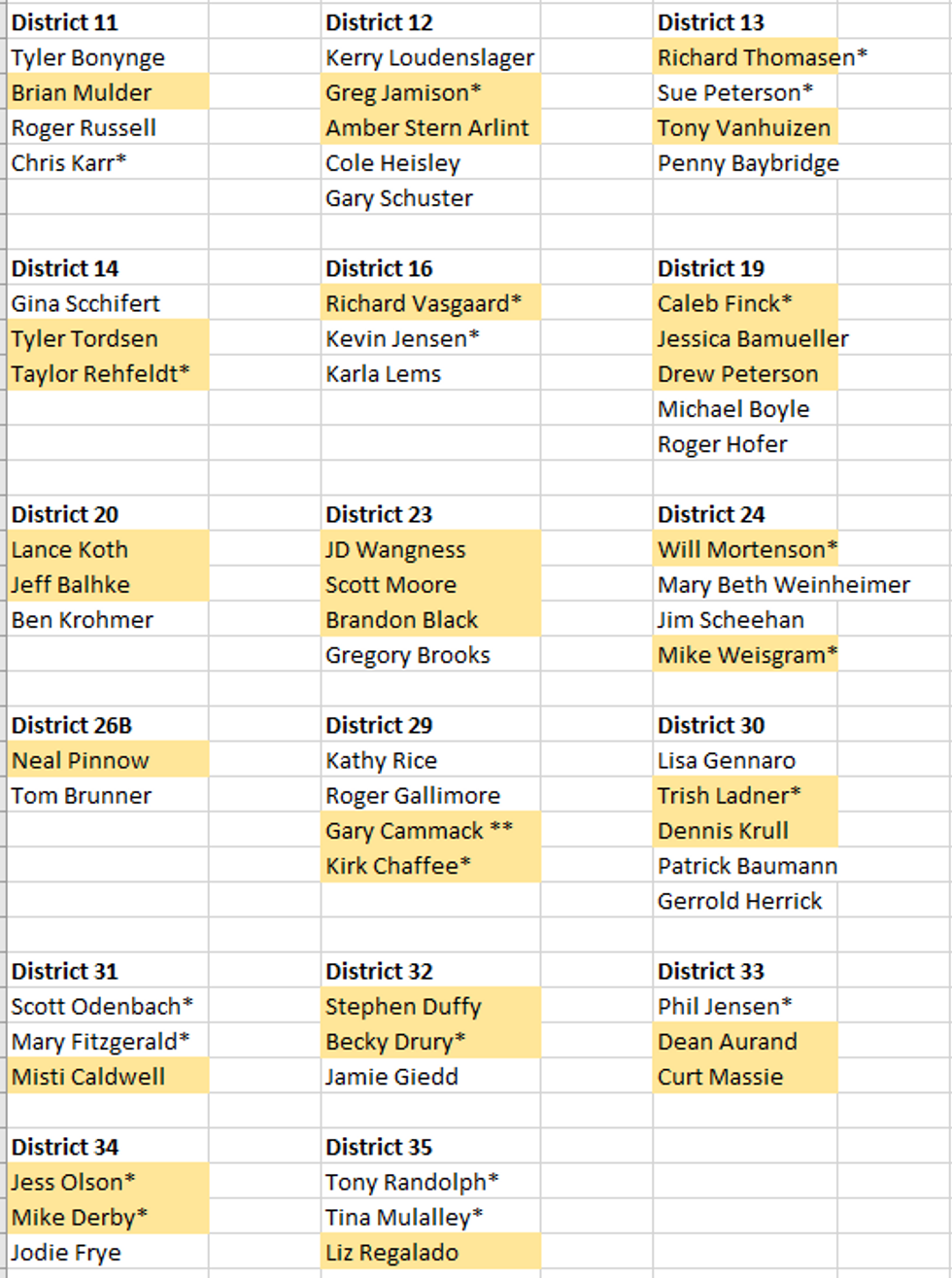 The highlighted members are the establishment picks not considered “far right”.

But what does “right-wing extremist” mean? People who oppose men in women’s sports, chemical castration of minors, corporate human rights abuses and dangerous shooting orders, but support tax cuts? The above issues have essentially been the dividing lines between the governor and some House conservatives over the past two years. These members pushed for a half-percent cut in sales tax, but were stymied by the governor. Then they tried to get rid of the sales tax on groceries and introduced a gas tax exemption, which was even done in some blue states. But the governor is obviously opposed enough to force her out of office.

Conservatives across the state and across the country clashed with Gov. Noem last year when she opposed legislation banning men from women’s sports.

“All the people on her target list are true Christian conservatives, and those are the people she wants gone,” Rep. Rhonda Milstead, the main sponsor of HB 1217, the women’s sports law, said in an interview with TheBlaze.

Milstead also accuses the GOP establishment of targeting the most conservative members with new district cards. “Our redistribution was terrible because it put people who wanted them into counties where they’re going to have a hard time, or because it pitted solid conservative people against each other in the same county,” accused the newcomer, who is developing the greater Sioux Falls area represents. Milstead claims the map was drawn with the intention of housing several other Conservatives in her district.

Watertown’s Fred Deutsch was moved to a new district because he was viewed as more repugnant to the GOP establishment than Joe Biden and the Democrats. His crime was sponsoring a bill banning chemical castration for minors, a bill that passed with ease in numerous other red states. Yet this year, South Dakota failed to pass a single significant piece of legislation on an important issue, from transgenderism and illegal immigration to medical freedom and COVID-19 fascism.

in a (n Interview on KXLG in Watertown On April 21, Kristi Noem, who hails from this part of the state, berated Deutsch and others for burdening the state and shoddy lawmakers, not reading the bills and not understanding the ramifications of good governance. “We need people who are thoughtful,” Noem said in a common refrain we hear from mainstream Republicans.

Milstead disagrees. “Fred is an excellent researcher and probably does more research on the issues than the next 10 lawmakers. He always does his homework, even if I don’t agree with him, and Governor Noem knows it.”

There is a common thread underpinning this inner-party struggle in South Dakota that reverberates throughout the Republican Party nationwide. It’s not a divide between conservatives and liberals, or moderate Republicans and “far-right” Republicans. There is an unbridgeable gulf between the priorities and values ​​of the average Red voter and the special interests that control the powerful entities in the state.

Though the Republican governors and legislative leaders of the Red state will find some minor ways of distancing themselves from the Democrats, they will always be doggedly on the side of the corporatists on the issues that fight the zeitgeist. Whether it’s transgenderism, mass refugee resettlement, illegal immigration, or COVID fascism, the powerful Republicans in office will always side with big business, which unlike previous generations squarely sides with cultural Marxism and against individualism freedom stands. Even when it comes to the tax issue, which has historically been unified Republicans of all stripes, the corporatist wing, for obvious reasons, wants to go for targeted tax rules rather than broad-based cuts.

Nowhere is this more evident than in the healthcare cartel. Sanford Health and Avera Health are the top employers in the state. It’s pretty obvious why medical freedom will be taboo in the legislature. “The game is very simple,” notes Rep. Milstead. “The Political Action Committee of the South Dakota Association of Healthcare Organizations contributes to numerous Liberal candidates across the state who they believe will lead their affairs. Most candidates don’t have a lot of money, so they’re afraid of what these lobbyists and PACs might do to them.”

Rep. Steve Haugaard is running against Noem in the June 7 primary. on his campaign website, he makes it clear that it’s not just any issue that motivates his run, but rather the power structure behind the results we see across numerous issues. “The axes of big tech, big business, big education and Hollywood have dramatically changed our culture, especially in the last decade,” writes the former speaker of the House of Representatives, who now faces a David versus Goliath competition. “Today, big multinational corporations dictate how we live, how our children grow up and what values ​​our children should be taught.”

The South Dakota Constitution begins with the phrase, “We, the people of South Dakota, are grateful to God Almighty for our civil and religious liberties…” Today we face the challenge of corporations that are essentially an arm of the government or often become even more powerful than government, with the ability to destroy civil and religious liberties while preventing elected government officials from doing the dirty work. They often allow elected Red State Republicans to campaign to the contrary, knowing that they will work hand-in-hand with those entities’ lobbyists to silence the voice of the people.

Therefore, anyone who wants to advance the cause of liberty and traditional values ​​beyond the two legacies must inevitably engage in all-out war with the state’s most powerful interests. It’s not for the faint of heart.