In 2022, many Americans will marry later or not at all, and we’ve never been more grateful for this cultural development than when we watch Game of Thrones and House of the Dragon.

Sunday’s Dragon episode, We Light the Day, celebrated the marriage of heiress to the Iron Throne Rhaenyra Targaryen (Milly Alcock) to the powerful heir to Driftmark Laenor Velaryon (Theo Nate). The young and clearly not in love couple are barely related, a victory in all seven kingdoms, but their wedding was far from uneventful and not in a good way.

It was already observed in Season 1 of Game of Thrones that “a Dothraki wedding without at least three deaths is considered a boring affair”. This was uttered at Daenerys’ wedding to Khal Drogo (Jason Momoa) in a scene that strongly portrayed the non-white Dothraki as savage and barbaric. But the citizens of Westeros are no better; Throughout Thrones and now Dragon, it seems that weddings are the most chosen occasion for violent, vengeful murder.

The Murder in Question: An innocent – albeit insignificant – Joffrey Lonmouth (Solly McLeod), Laenor’s secret lover. For reasons known only to the deceased, he decides to needle Ser Criston Cole (Fabian Frankel) for their shared position as classified royal consorts, resulting in Criston beating Joffrey to a pulp on the banquet hall floor.

(It’s worth nothing that there are actually many happy and successful marriages in George RR Martin’s “Fire & Blood,” but almost all of them are between direct siblings. Point one at incest, I guess.) 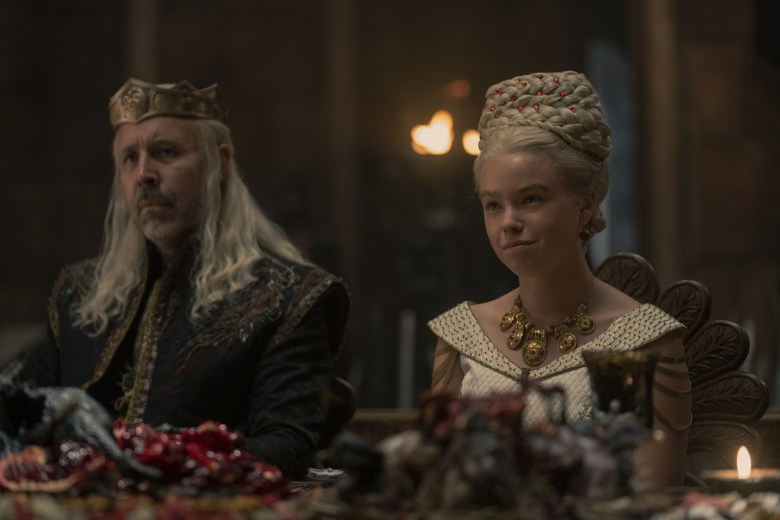 It’s all downhill from here.

Thrones is best known for two doomed wedding celebrations: the Red Wedding, when Houses Frey and Bolton brutally massacred the Stark family and their banners, and the Purple Wedding, when Joffrey Baratheon (Jack Gleeson) at his own feast was poisoned. The only wedding where no one was murdered was Sansa’s (Sophie Turner) wedding, which by any measure cannot be considered successful or joyful. The events of the “House of the Dragon” took place long before all of this, and testifies to the long history of wild wedding celebrations in Westeros. In fact, one could argue that in this scene, House of the Dragon displays the values ​​of its more primitive society; Joffrey is barely wiped off the floor before the marriage moves on, and everyone pretends a knight didn’t commit murder while the folks were barely done with dinner.

Criston’s attack on Joffrey destroys the mood in several ways. Up to this point, the wedding has zero deaths, which is the ideal number of deaths for any event! In his defense, young Joff may not have known that Criston wasn’t as cool with the marriage arrangement as he was, that watching Rhaenyra marry someone else was actually devastating, even if that groom was spoken for. It’s a shame, because the arrangement of Laenor and Rhaenyra was as promising and progressive as it can be in Westeros even centuries later; She accepts his sexuality and he accepts her colorful history, and they agree to live and let live while fulfilling the required duties of the Crown and their Houses. But relationships like this are difficult; Joffrey may have been happy with that, but Criston’s disappointment is understandable. He does not even have the opportunity not to attend the wedding because he works to the the crown! It’s a situation most people will struggle to hold together – but could we suggest he redirects that anger next time? Hit some shots in the back of the room like a normal human, Criston!

But at Princess Rhaenyra’s wedding to Laenor Velaryon, being petty was certainly the way to go. Before Criston spattered the floor with pieces of Joffrey, the most scandalous event of the evening was Queen Alicent (Emily Carey) entering the event in a dazzling green dress. That would be gasping for breath without additional context – Homegirl is it wear and tear this dress, on a mission to outshine a bride on her wedding day – but the importance of House Hightower’s emerald hue is significant. Until now, Alicent has been supportive of Rhaenyra even when their relationship has been tested. By abandoning Rhaenyra and reaffirming her Hightower roots, Alicent is sending a message. After the wedding, she goes even further, using Criston’s sword and instantly forgiving him for ruining Rhaenyra’s day and Laenor’s life, because perhaps Alicent just enjoys seeing her old friend suffer. The rift between these women can no longer be denied, a rift that could destroy Westeros and countless homes if it breaks open.

What was the note on Queen Elizabeth's coffin?