Life’s a bronze bitch, and then you die.

That pretty much sums up the first few minutes of Sunday house of the dragon, who eventually introduced Daemon’s wife and then promptly killed her. Let me be more specific: And then he killed her promptly. (Read a full synopsis.)

Ever since the series premiered, we’d heard Prince Daemon take every opportunity to babble about the woman he was forced to marry. But all we really knew about her was that she was the heiress to Runestone and, according to Daemon, uglier than any of the many sheep that populated The Vale. You will remember in the first episode Daemon even offered Rhea to Otto Hightower? Admittedly, this was more about goading the king’s hand over the recent death of his own wife than Daemon’s parting with a partner he deeply despised. 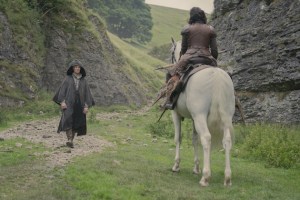 So Episode 5 gave us our first real look at Lady Rhea, who turned out to be a skilled hunter with a very low tolerance for Daemon’s BS. I liked her INSTANTLY. Too bad Viserys’ brother was deader than a Dracarys’ goat the moment Viserys’ brother crossed their path, among the rolling hills outside of Runestone.

“…A tragic mishap such as the fate of kingdoms ensued: the ‘bronze bitch’ of Runestone, Lady Rhea Royce, fell from her horse while peddling and struck her skull on a stone,” writes George RR Martin Fire & Blood, the basic text of the show. In a post-show featurette that HBO released after the episode aired, executive producer Ryan Condal pointed out that the vagueness of that line seemed like the perfect place to introduce a little Daemon variance; later in dragon In the episode, Rhaenys reports that Rhea’s neck and head were “crushed,” leaving little to question what Daemon did with the stone he picked up shortly after his wife’s…accident? It sure didn’t feel like an accident when the horse reared, did it? We can all agree that he scared the animal and got lucky with what happened next, yes? (For what it’s worth, in Fire & BloodRhea “stayed for nine days before finally feeling well enough to get out of bed, only to collapse and die within an hour of getting up.”)

But I’ve dwelt too long on the unseemly details of Lady Rhea’s death. Instead, let’s focus on how she used her last breaths the way The Seven would have wanted: to anger Daemon. “I knew you couldn’t finish,” she taunted as he tiptoed his boot up and down her forearm. “Cowardly!” Too bad we won’t see more of it shadow and bone‘s Rachel Redford in the role; I liked her very much. Here’s hoping that if Daemon somehow ends up using her family’s ancestral castle, it will choose to haunt it, if for no other reason than to shame him for his bedroom imperfections for eternity.

* Given the amount of Viserys oozing, bleeding, puking and leaning to one side in this episode, how is this man still alive in the promo for next week’s big time skip?

* Hmm, after that murder knocked out on the dance floor, maybe Ser Criston isn’t the mild-mannered young lad I’d led you to believe? Still, his request for Rhaenyra to run away together was reminiscent of this fellow damned thrones Couple who spoke of escaping their responsibilities and sailing to the Free Cities.

* Was anyone else confused as the knights burst into the pre-wedding banquet? I’m guessing that the fight between Joffrey and Criston had broken out and they were reacting to it, but we just couldn’t see it at the time? At first I thought maybe Alicent had summoned Hightower banners to stage a coup or something.

What thoughts/questions/predictions do she have after this week house of the dragon?