dragons are coming. HBO’s Game of Thrones prequel House of the Dragon draws nearer and nearer, like the Night King north of the Wall as he marched into Westeros.

But this is not about him.

House of the Dragon is set nearly 200 years before Game of Thrones, with an all-new cast of characters, diverse combat (personal and physical), and an unfamiliar Westeros that viewers will soon get to know. The series recounts events from George RR Martin’s “Fire & Blood,” but for those who aren’t able to catch up on centuries of fantasy folklore ahead of HBO’s August 21 premiere, here’s what you should know.

Starting Material (and a Grain of Salt)

House of the Dragon has what later seasons of Game of Thrones didn’t have: source material. Martin outlines the basic events of the Targaryen story in Fire & Blood – but this isn’t your average adaptation.

Unlike the novels behind Game of Thrones, Fire & Blood has an omniscient narrator: Martin himself. He documents the stories based on various reports from maesters, septons, other literature, and a guy named Mushroom. In the years covered in The House of the Dragon, many of these stories contradict each other (Mushroom’s is particularly colorful). Showrunners Miguel Sapochnik and Ryan J. Condal have multiple versions to choose from, and the option to create an entirely new one – using Martin’s work, as Thrones eventually did, as a template but not as an exact blueprint. 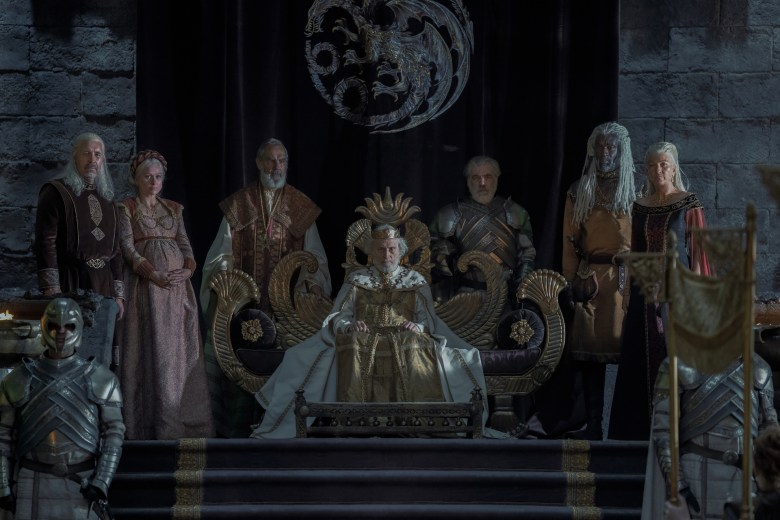 A whole mess of Targaryens in House of the Dragon.

“Fire & Blood” and “House of the Dragon” are chock-full of Dragonborn Targaryens, but not to the point where viewers get lost. The premiere introduces King Viserys I Targaryen (Paddy Considine), wife Aemma (Sian Brooke), daughter Rhaenyra (Milly Alcock), brother Daemon (Matt Smith) and cousin Rhaenys (Eve Best). They’re light enough to stay straight, but early episodes also drop the names of some of Targaryen’s past heavyweights, which provide further context.

The rule of the Targaryens in Westeros began with Aegon I, who conquered the seven kingdoms with his dragons and his sister-wives. “House of the Dragon” names Aegon and credits him with uniting the kingdoms and bringing his family to power. It also mentions Aegon’s wife Visenya, who outlived her two siblings and was known for her bravery on dragonback and in battle. Her sword, Dark Sister, is the Valyrian steel blade wielded by Daemon Targaryen, and Viserys wields Blackfyre, Aegon’s own blade.

It is worth noting that Visenya’s son Maegor, not having the strongest claim to the throne, eventually encroached on the throne and was so bloodthirsty as ruler that he became known as Maegor the Cruel. House of the Dragon strategically mentions Maegor in a simile that chills the characters who hear it and should also warn the audience that Maegor set the bar for Targaryen warfare on Targaryen.

Game of Thrones fans will remember the incest, but during one of his early confirmations in Season 1, Cersei tells Ned Stark that the Targaryens marry brother and sister for generations to keep their bloodlines pure. This is true, and thrives very well in the House of the Dragon era, where all manner of relatives are either married or giving off disconcertingly flirtatious vibes.

When they first ascended the throne, the Targaryens met opposition to this practice from the Faith, the religious sect of most Westerosi. Numerous septons and their followers have declared Targaryen marriages invalid and abominable, leading to escalating conflicts, wars, and unstable regimes – but that was before the State of Emergency, an actual doctrine that basically just declares that Targaryens are of the same norms as other people are excluded because they are said to be closer to the gods. You can ride dragons! Give them some incest as a reward.

Steve Toussaint in The House of the Dragon.

Prominent Game of Thrones families like Houses Baratheon, Stark, Lannister and others are very much alive and well in the age of House of the Dragon, but don’t expect to see much of them. Instead, the Targaryens keep close company with houses like Velaryon and Hightower, bloodlines that were less involved in rule and court (for reasons that may or may not be disclosed) by the time Robert Baratheon became king before Game of Thrones. .

The Velaryon family, like the Targaryens, are descended from Old Valyria, an eastern city that was destroyed by a volcano long before this series took place. The main protagonists include Lord Corlys (Steve Toussaint), Rhaeny’s husband and commander of powerful ships and fleets. The Velaryons are closely linked to the Targaryens – not least through this marriage – but they are deeply embittered to be so close to the throne and still refuse to rule. Rhaenys’ father was older than Viserys’ father, but a High Council decided that the right to rule would not pass through the female bloodline. This will haunt all concerned as Viserys appoints Rhaenyra as his heir.

Another large family in House of the Dragon are the Hightowers, starting with Lady Alicent (Emily Carey; Olivia Cooke) and her father Otto (Rhys Ifans), Hand of the King. Otto Hightower was Hand before Viserys came to the throne, and he makes his bigger plans all but clear in Episode 1. And as the trailers show, Alicent is on the verge of competing with Viserys’ daughter Rhaenyra, the heiress, for the throne.

The Dance of the Dragons

The reign of Viserys eventually triggers the Dance of the Dragons, a great Targaryen civil war, and tensions simmer from the start. House Targaryen is a ticking time bomb (dragon egg?) and this series is going to set it off sooner or later.

“The Dance was a war like no other in the long history of the Seven Kingdoms,” writes Martin. “Though armies marched and met in savage battles, much of the carnage took place on the water and…especially…in the air, as dragon fought dragon against dragon with tooth and claw and flame. It was a war marked by secrecy, murder and also betrayal, a war fought in shadows and stairwells, council chambers and courtyards with knives, lies and poison.”

House of the Dragon premieres August 21 on HBO.

Two dancers from the Kyiv City Ballet, who are touring in the US, returned to Ukraine to fight