arm yourself, house of the dragon Fans: We caught a war.

It was one thing to hear As a history lesson, little Shireen talks about Rhaenyra vs. Aegon, aka the epic war that became known as the Dance of the Dragons game of Thrones. It’s a completely different when house of the dragonThe season 1 finale takes us to the abyss of this legendary entanglement, then plunges us right into the fray.

Read on for the highlights of “The Black Queen,” then be sure to hear what Emma D’Arcy and co-showrunner Miguel Sapochnik have to say about this tragic death at the end of the hour.

BAD NEWS, BAD RECEPTION | Rhaenyra is adamant that Luke is not a suitable heir for Driftmark. She consoles him by telling him that when she was named heir to the throne, she was the same age as he is now and not ready either: “I had to earn my inheritance.” He counters that he’s not like her – “perfect.” . She kisses his head, assuring him that she will prepare him the way her father prepared her. 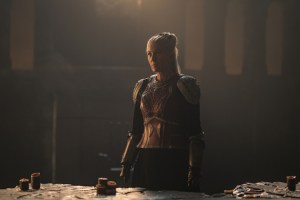 They are interrupted by the arrival of Rhaenys, who requests an audience with Rhaenyra and Daemon. She doesn’t hit the bust. “Viserys is dead,” she says bluntly, offering her condolences before continuing, “Aegon has been crowned his successor.” Daemon immediately assumes the king has been killed; Rhaenyra’s eyes fill with tears and she clutches her stomach in agony. “The Greens are coming for you, Rhaenyra, and for your children. You should leave Dragonstone immediately,” Rhaenys advises, and walks out while making it clear that she only came to Viserys out of loyalty, but doesn’t want to know anything about what lies ahead. But that seems unlikely as Rhaenyra’s pain keeps getting worse. She reaches under her skirt and finds blood: the baby is coming.

It’s still too early for the birth, but the princess is definitely in labor as she retreats to her quarters and paces, moaning in pain as the labor kicks in. She calls her two eldest sons to her side; You wonder where Daemon is. “Got insane. Gone planning his war,” she gasps, then demands that Jacerys, next in line, make sure nothing is done while she’s ill. Daemon brings out the boy when he gives two knights of the Kingsguard an ultimatum: switch their allegiance to Rhaenyra or die at the hands of the dragon.

At that moment, Rhaenyra – who has refused to let any of her companions help her – has the child right there on the stone floor of her bedroom. The child is stillborn. She is cradling and wrapping the child, and when we next see everyone from the castle has gathered around the baby’s pyre out on the cliffs. There, Ser Erryk Cargill finds her, presents Rhaenyra with the Crown of Viserys, and swears his allegiance to the princess. Daemon puts the crown on his wife and bows with the words “My Queen”. Everyone else follows the example.

ANOTHER KIND OF ASCENT | Rhaenyra quickly shrugs off her grief—or suppresses it—and heads to the Chamber of the Painted Table to devise a strategy. They discuss which houses are likely to support them and which are likely to side with Alicent’s Greens, and then Daemon gets all excited when he points out that Rhaeynra’s blacks have many more dragons at their disposal than the Hightowers & Co.

However, everything grinds to a halt when Otto Hightower arrives with a message from Alicent intended only for Rhaenyra. “Where is the princess?” he wonders as he stands on the bridge outside the castle; Rhaenyra chooses this moment to attack Syrax. Otto offers her Dragonstone, in which her sons are taken care of, if she swears allegiance to Aegon. “Every symbol of legitimacy belongs to Aegon,” says Otto, adding that Houses Stark, Tully, and Baratheon will side with Aegon. She and Daemon loudly say no to those terms, and she rips his Hand of the King pin from his lapel and throws it over the side of the bridge. Otto doesn’t respond and instead gives Rhaenyra a personal note from Alicent: a page from one of the books they read together as children. Daemon is ready to fight and everyone draws their guns. But the news has Rhaenyra crying, and she orders all men to retreat, telling Otto that King’s Landing will have her answer soon.

Shocker: Daemon wants to go to war immediately. Rhaenyra points out that when dragons are used in war, everything burns. And ooooh the idea that the new queen is even in view of Accepting Otto’s deal makes Daemon angry. When he yells at her in front of everyone, she clears the room. (Side note: I loved that look Rhaenys shoots on the way out.)

Rhaenyra uses the alone time to spawn the Song of Ice and Fire, which enrages Daemon even more; he grabs her by the throat (!) while angrily dismissing it as one of Visery’s fanciful dreams. “Dreams didn’t make us kings. Dragons do,” he hisses. But then she realizes that Viserys never told him about the prophecy…which coincides with the moment Daemon realizes the prophecy will be a thing.

THE SEA SNAKE SLIDES AGAIN! | The good news: Corlys is alive and seems to be getting better! The bad news: Rhaenys is mad at him for fleeing to war, and she has all the bad news from the final episodes to let him know before he even gets out of bed. “Our quest for the Iron Throne is over,” he concludes, adding that they will explain for no one and just chill. Isn’t it nice to think like that? Rhaenys makes it clear that her grandsons, Jacerys, Lucerys, and Joffrey, will never be safe as long as Aegon is king. Plus, the Queen That Never Was is pretty impressed with her cousin’s ability to not be a hot-headed asshole.

Lord Corlys improves enough to make his way to the Chamber of the Painted Tablet, where he swears his loyalty – and the Velaryon fleet – at her side. She is touched, and glancing at Rhaenys, she acknowledges how much Mrs. Sea Snake has done to make this possible. Oh, and good news: they control the Stepstones and the entrance to the Straits, thanks to the mess Corlys got into years ago.

Even so, Rhaenyra doesn’t run headlong into a fight. “Caution does not mean standing firm. I want to know who my allies are before I send them off to war,” she tells Corlys. They discuss sending ravens, but Luke and Jace volunteer to ride their dragon to deliver messages to faraway homes that may need a little convincing in person.

The queen makes her young swear to travel as messengers, not warriors. She has a tender moment with them, and then they’re gone.

RIP, LUCERYS | It’s stormy when Luke arrives at Storm’s End… and he’s surprised to see another dragon already lurking outside. Inside, he learns that Aemond has arrived before him and is standing next to Lord Borros Baratheon while Luke delivers the message from Rhaenyra. Baratheon is pissed that Luke showed up empty-handed; at least Aemond brought a marriage pact. Dejected, Luke turns to leave… and then Aemond demands that the boy cut out one of his own eyes in exchange for what he did to Aemond years ago. Aemond rips off his eye patch and we see that he has stuffed a giant sapphire into the socket. Likewise? He’s super pissed. When he is after Luke, Lord Borros orders them to spill each other’s blood elsewhere.

So Luke dashes to Arrax and flies away in the thunderstorm. Luke seems to be doing just fine… until Aemond flies overhead on Vhagar and you get a sense of how impossibly tiny Arrax is in comparison. There is a lot of back and forth and a chase, but then Arrax goes rogue and spits fire at Vhagar, and Vhagar counters by falling down and biting Arrax’s head off. Unfortunately, he snags Luke in the process, and that’s all she wrote for Rhaenyra’s second son. For what it’s worth, it’s clear that when all this goes down, both dragons will have stopped listening to their riders; After that, Aemond looks more disappointed than I gave him credit for.

Rhaenyra receives the message in her war room. We don’t see her face the moment Daemon tells her her son died, but we do when she turns around. Though tears stream down her cheeks, the look is pure anger: This war is ON.

Now it’s your turn. What do you think of the episode? Rate it – and the season as a whole – in the polls below, then share your thoughts in the comments!