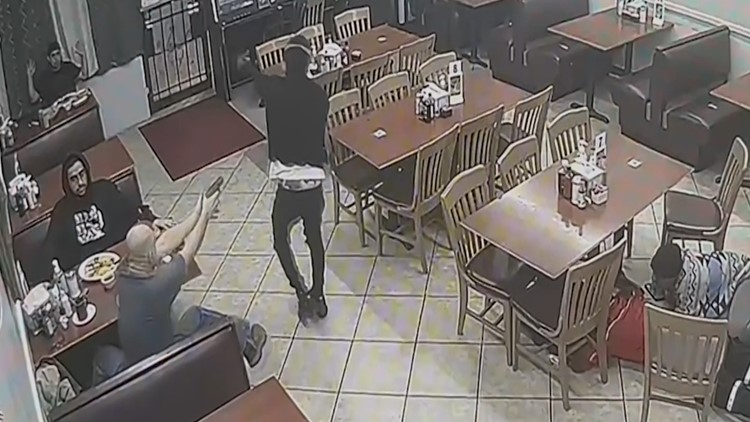 Police said the customer who shot the robber was wanted for questioning. He wasn’t charged.

HOUSTON – A customer at Ranchito Taqueria shot a man who robbed the restaurant in southwest Houston late Thursday night, according to the Houston Police Department.

It happened just before 11:30 p.m. Thursday at the S. Gessner restaurant near Bellaire Boulevard.

Houston police said the gunman wearing a mask entered the restaurant and demanded money and wallets from customers. However, as he left, one of those customers shot the suspect.

The incident was caught on surveillance video.

Also the Houston Police Department published surveillance photos of the customer who shot the robber in the video. Investigators said he was being questioned about his role in the shooting. He has not been identified and will not be charged at this time.

The gunman collected the stolen money from the robber and returned it to the other guests, police said. Then the rest of the people in the restaurant left the scene before the police arrived.

Nobody was injured in the restaurant. Investigators said the suspect ended up not having an actual weapon.

“The alleged robbery entered the store wearing masks and gloves,” HPD Lt. Wilkens. “He had a plastic gun, possibly an Aero-Soft or possibly a small BB gun.”

Surveillance video shows the shooting. It shows customers, witnesses and the shooter leaving the scene immediately after the shooting.

Investigators are asking the shooter and victims who left the scene to contact HPD Homicide at 713-308-3600 for testimony about the incident.

Was this shooting justified?

“I can show you exactly where it is in the law, 9.31 and 9.32 of the Criminal Code,” said Nathan Beedle of the Harris County District Attorney’s Office.

“Whether someone uses deadly force in the situation is considered correct under Texas law,” Beedle said.