Giving the beloved Lestat a unique twist? It depends on the voice.

There are many things to love about AMC’s Interview With the Vampire adaptation, from Jacob Anderson’s sensitive portrayal of the vampire Louis to the mysterious narrative exploration of memory that is at the heart of the titled interview itself. There’s also Sam Reid’s bold and fierce performance as Anne Rice’s prolific and popular character, the vampire Lestat.

Lestat is many things to readers, including a complex, manipulative villain who defined the fantasy genre and a seminal (if flawed) LGBTQ literary character. Reid nailed all of these elements throughout the adaptation’s first season, and hearing both him and series creator Rolin Jones speak was a complex process that gave the character her spin. Jones admitted he hasn’t watched other vampire shows, including True Blood or What We Do in the Shadows, to make sure they aren’t overly influenced.

“We had the burden of creating the architecture for a series that would span several years,” Jones told IndieWire via Zoom. Lestat is cemented in Rice’s second book (1985’s The Vampire Lestat), but Jones wanted to make his background more solid. He didn’t want to just insert “the brat prince” into the story he was telling, completely made up. Casting just one handsome and charming actor wasn’t enough. Jones said he needed someone who could capture and play with Rice’s dense dialogue, find the humor it contained, and walk through the scenes with an otherworldliness.

The otherworldly quality came in a place unique to Reid: his voice. The Australian-born actor wanted to infuse the character’s speaking with a sense of unnaturalness to illustrate his ability to imitate. “He’s French, but he’ll have picked up a whole bunch of different sounds from a whole bunch of different places,” Reid said. “He always embodies humanity… and so I wanted it to sound kind of weird and ethereal.”

In Episode 6, Lestat decapitates a train attendant and begins speaking through the man’s head. “I wanted it to feel very different,” Reid said. “Originally, I did a whole series of spins that came through the carriage [but] we had to take it down a bit.” Reid also knew he wanted to show again how Lestat uses his voice to mimic and scare him in that scene.

Reid explained that he spoke to Adam O’Byrne, one of the series’ producers who played the conductor in that scene, about what the conductor would sound like and how Lestat would imitate him. “I wanted him [Lestat] having that aggressive conductor’s voice that he made loud,” Reid said. “He’s always looking for an opportunity to get back on stage and perform, and [the question is] whether that will come about with a severed head or not?” 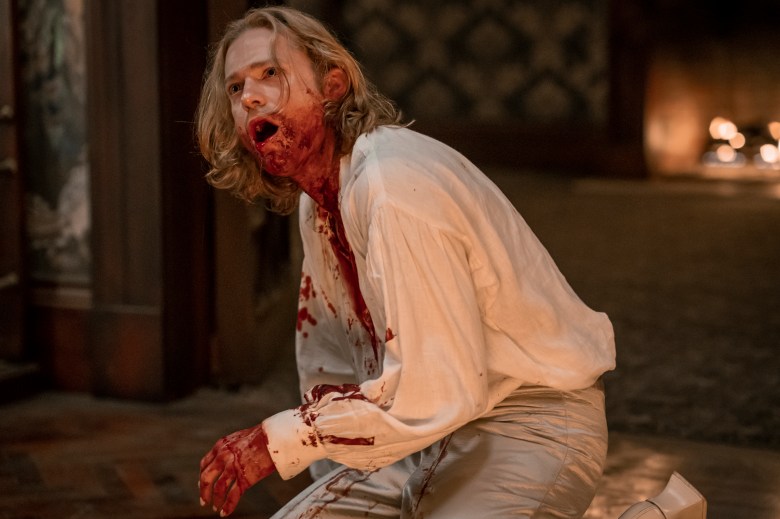 “Interview with the Vampire”

Reid sees Lestat as a performer who can adapt to anyone he meets. “He’s an oscillating character who’s always different,” Reid said, and that brought a sense of freedom to the performance. Because Lestat sees things differently, it forced Reid to act out scenes with an awareness that the other actors and characters didn’t have, or to interpret them differently. Case in point: Lestat’s performance at Louis’ brother’s funeral. Reid explained that Anderson and director Alan Taylor questioned Lestat, who came to the funeral to ask Louis why he hadn’t visited the vampire. Taylor and Anderson saw it as a terrible action.

However, Reid saw the character’s motivation as an attempt to express his condolences to Louis. “He [Lestat] he’s going through a series of emotions in that scene because he’s also being rejected, and he doesn’t respond very well to rejection,” Reid said. That was one way of framing the motivation behind Lestat: Even when he’s doing something absolutely horrible, the intention comes from a place where the character believes it’s love. And that love is certainly messy, destructive, and over the top, which is what Jones wanted for the characters. Lestat is a brat, and Reid played that to the max in a series that wraps it in class and elegance. “Let’s make it messy, evil and fickle,” Jones said. “Let’s put them in a John Cassavetes film.”

This volatility is at odds with the vampire shows that already exist. “When you’re tackling five or six lives and every night is a night of violence, it’s really incredible that they can sit down and watch an opera together,” Jones said. “If there is a great sacrilege, we have distinguished ourselves from the novels [it’s] that vampires are not getting more distant. As the journey progresses, they accumulate more and more baggage. You become more unstable.”

Reid’s performance is certainly a clue as to why this unstable baggage makes for such compelling television.

“Interview With the Vampire” is now available to stream on AMC+.