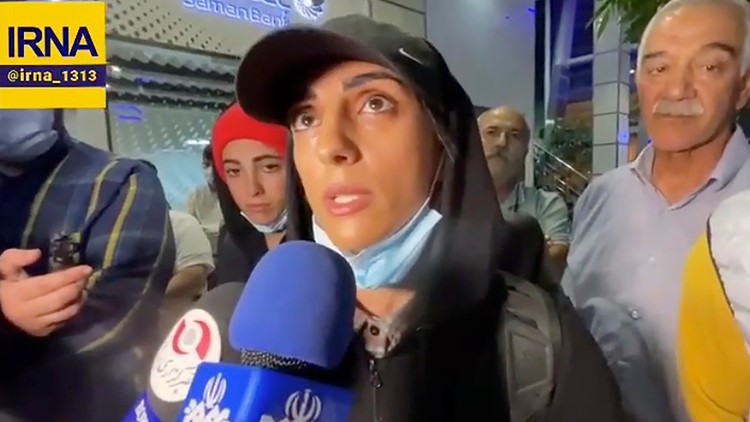 Concerns for Elnaz Rekabi had grown, with supporters warning that she could be arrested at home.

Rekabi’s decision not to wear the hijab on Sunday came as protests sparked by the death of a 22-year-old woman in custody on September 16 entered their fifth week. Mahsa Amini was arrested by the country’s vice squad because of her clothing — and her death has prompted women to ditch their obligatory hijabs in public.

The demonstrations, which have seen school-age children, oil workers and others take to the streets in over 100 cities, pose the most serious challenge to Iran’s theocracy since mass protests surrounding the disputed 2009 presidential election.

Supporters and Persian-language media outside Iran are worried about Rekabi’s safety after she decided to compete without a headscarf.

Rekabi on Wednesday reiterated a statement previously posted on her behalf to an Instagram account describing not wearing a hijab as “unintentional”. The Iranian government regularly puts pressure on activists at home and abroad to often air what rights groups describe as forced confessions on state television — the same cameras she addressed when she arrived home.

She entered one of the airport’s terminals, filmed by state media, wearing a black baseball cap and a black hoodie that covered her hair. She received flowers from a bystander and then reiterated what had been posted on Instagram that wearing the hijab was “unintentional” and her trip went as previously planned.

Rekabi described being in a women-only waiting area prior to her ascension.

“Because I was busy putting on my shoes and gear, I forgot to put on my hijab and then I went to the competition,” she said.

She added: “I returned to Iran with peace of mind, even though I had a lot of tension and stress. But thank God nothing has happened so far.”

Outside, she apparently got into a van and was driven slowly through the assembled crowd cheering her on. Where she went after that was not clear.

Rekabi left Seoul on a Tuesday morning flight. The BBC’s Persian service, which has extensive contacts inside Iran despite an operating ban, quoted an unnamed “informed source” as describing how Iranian officials confiscated both Rekabi’s mobile phone and passport.

BBC Persian also said it was originally scheduled for Wednesday but its flight appears to have been unexpectedly brought forward.

IranWire, another site focused on the country founded by Iranian-Canadian journalist Maziar Bahari, once arrested by Iranclaimed Rekabi would be immediately transferred to Tehran’s notorious Evin prison upon arrival in the country. Evin prison was the scene of a major fire last weekend that killed at least eight prisoners.

In a tweet, the Iranian embassy in Seoul denied “all fake, false news and disinformation” regarding Rekabi’s departure. But instead of posting a photo of her from the Seoul competition, a picture of her wearing a headscarf was posted at a previous competition in Moscow, where she won a bronze medal.

Rekabi did not wear a hijab during Sunday’s final at the International Federation of Sport Climbing Asian Championships.

Rekabi wore a hijab in her first appearances at the week-long climbing event. She wore just a black headband on Sunday, her dark hair pulled back in a ponytail; she wore a white jersey with the Iranian flag as a logo on it.

Footage from the competition showed Rekabi relaxed as she approached climbing and after competing.

Iranian women who compete abroad under the Iranian flag always wear the hijab.

“We expect her to return to Iran and we will continue to monitor the evolution of the situation upon her arrival,” the International Federation of Sport Climbing, which oversaw the event, said in a statement. “It is important to emphasize that athlete safety is of the utmost importance to us and we support all efforts to protect a valued member of our community in this situation.”

The South Korean Foreign Ministry confirmed the departure of the Iranian athlete and her team from the country, without elaborating. On Wednesday, a small group of protesters demonstrated outside the Iranian embassy in Seoul, with some women cutting off strands of their hair as others have done in demonstrations around the world since Amini’s death.

So far, human rights groups estimate that more than 200 people have been killed in the protests and the subsequent crackdown by the security forces. Iran has not offered a death toll in weeks. According to the Human Rights Activists group in Iran, demonstrations were observed in over 100 cities. Thousands are said to have been arrested.

However, gathering information about the demonstrations remains difficult. Internet access has been interrupted by the Iranian government for weeks. According to the Committee for the Protection of Journalists, the authorities have now arrested at least 40 journalists.

Iranian officials, including Supreme Leader Ayatollah Ali Khamenei, have repeatedly claimed that the country’s foreign enemies are behind the ongoing demonstrations, rather than Iranians angry at Amini’s death and the country’s other woes.

Iranians have seen their life savings evaporate; the country’s currency, the rial, plummeted and Tehran’s nuclear deal with world powers is in tatters.

My son's stepmother replaced me at his wedding - what should I do?