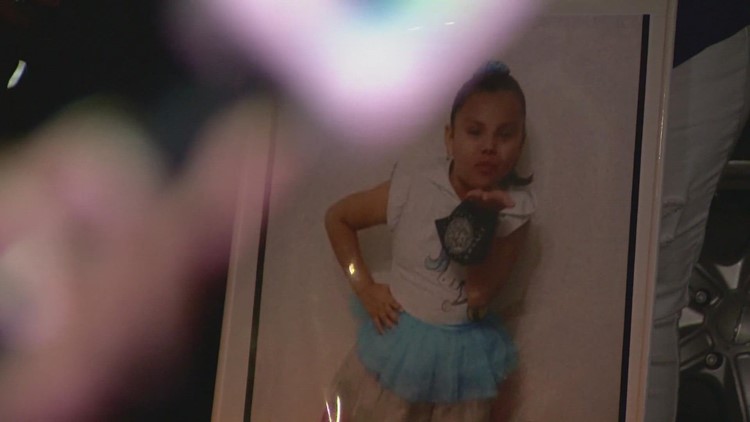 Loved ones came together to honor 8-year-old Nicole “Marae” Vidales at a roadside vigil on Thursday.

SAN ANTONIO — A family mourns the loss of an 8-year-old girl who died in a DWI crash. It happened three days before Christmas.

“She was a beautiful soul, a beautiful angel,” said Marta Macias, Marae’s great aunt. “She loved to dance. Something has been ripped from our hearts and we can never get it back.”

According to police, she was in the back seat of an SUV that was going south on General McMullen Drive.

The driver reportedly hit a curb and lost control. Authorities say the SUV struck a fire hydrant and a parked vehicle before crashing into a utility pole near Commerce Street.

Marae died at the scene. Family members say Marae’s sister, mother and grandmother were also in the vehicle. They were all taken to the hospital.

“It was the hardest Christmas ever,” Macias said. “We were in the hospital in intensive care just trying to cope with all of this.”

The alleged driver is Marae’s mother. Authorities say she was intoxicated at the time of the crash.

“I’m not mad at the mother because it really was an accident,” Macias said. “I know she’s taking it very hard, and my heart goes out to her too.”

According to Macias, Marae’s father is imprisoned. She is working to get him released early so that at least one parent can attend the funeral.

“It would be a compassionate release,” Macias said. “I have approached elected officials. He also has stage four cancer and I’m trying to get him home. It was done, so I’m not taking ‘no’ for an answer.”

DWIs usually rise during the holidays. Macias has desperate news.

“Don’t drink and drive,” she said. “Get a cab, call a friend because look what happened.”

Macias says that Marae’s sister has left the hospital and is staying with relatives.

The alleged driver, 34-year-old Nicole Ovalle, was charged with “manslaughter by drunkenness”. A new charge of “aggravated assault with a deadly weapon” was added on Thursday. Ovalle is being held on a $100,000 bond.

https://www.kvue.com/article/news/local/mother-child-dies-san-antonio-crash-dwi/273-eb3a6355-a7da-4444-88b9-eab3ca36bb21 ‘It was the hardest Christmas ever’: Mom accused of killing daughter in DWI crash