Reichert, whose first film came out 50 years ago, brought progressive politics and working-class issues to the forefront of non-fiction cinema.

Julia Reichert, the Academy Award-winning co-director of American Factory and a staple of American documentary filmmaking since the 1970s, has died at the age of 76 after a 15-year battle with bladder cancer.

A champion of women’s rights and the working class whose films were ahead of their time in their intersectional exploration of class, gender and race in America, Reichert was also a pioneering leader and passionate advocate for the documentary film community.

Born into a working class family in New Jersey, Reichert began as a social activist and never intended to be a documentary filmmaker. “It was mostly a rich man’s job,” said Jim Klein, Reichert’s partner from the 1960s through the 1980s and co-director of her early films. “We were more social activists than filmmakers and we did it by the seat of our pants.”

Her first film, Growing Up Female, was completed 50 years ago on a $2,000 budget. It was one of the first documentaries to chronicle the modern women’s movement. In 1971, Reichert used the film as an organizational tool, traveling the country and showing it to small groups in town after town. Frustrated by the lack of distribution opportunities for films made by and about women, Reichert and Klein formed New Day Films, a documentary film distribution cooperative.

“Julia was an organizer at heart,” said Gordon Quinn, founder and artistic director of Kartemquin Films and occasional collaborator with Reichert. “She was hugely important in that role and fought numerous battles with the gatekeepers.” Along with Quinn and others, Reichert was a founding member of the Indie Caucus, an action group that worked to keep independent documentaries on PBS. “She had a real commitment to the democratic process,” Quinn said. “I would say, ‘We should do it,’ and she would say, ‘We have to call the committee and vote on it.'”

Reichert has extended her belief in progressive political ideals to her films. The themes of her work have ranged from the activist wives featured in 1976’s Oscar-nominated Union Maids, co-directed with Klein, and last year’s 9to5: The Story of a Movement, co-directed with Steve Bognar to members of the American Community Party (the Oscar-nominated Seeing Red: Stories of American Communists, also starring Klein) and the autoworkers of the Oscar-nominated films The Last Truck: Closing of a GM Plant and American Factory, both co-directed with Steve Bognar. After all, Reichert ended her Oscar acceptance speech for “American Factory” by declaring, “Things get better when the workers of the world unite.” 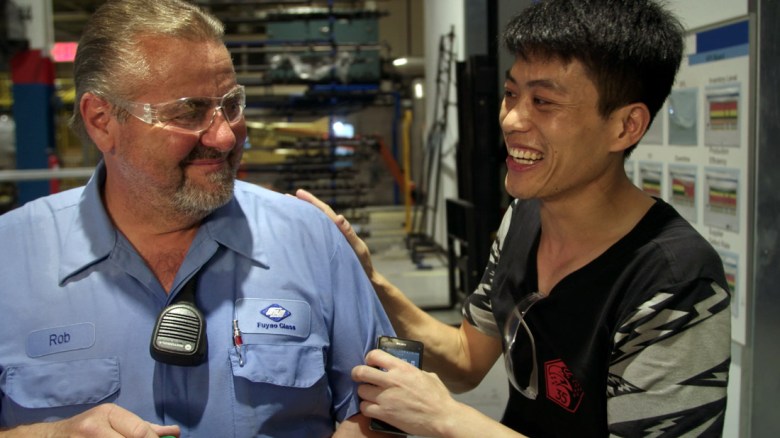 In a local Dayton newspaper, Steve Bognar recently described how all of Reichert’s films have the same “continuous thread” which he said “begs the question, ‘What makes a fair and just world?’ Especially for people who have no power but want a fair change of pace and want to live a decent life.”

Reichert maintained the same democratic approach to her process as director. “We don’t just interview people once,” Reichert told The American Prospect last year. “We’ve been building relationships with the people at American Factory and Last Truck over months. We stopped at people’s homes… We brought people a cup of coffee in the morning and sat down and talked. Time, time, time, time, and people realize that you really care about them… not just the story.”

In program notes for the Wexner Center for the Arts’ 2019 Reichert Retrospective, Film/Video Director and Curator Dave Filipi recalled an emblematic anecdote: After a Wexner screening of The Last Truck, Reichert and Bognar invited several auto workers over , who were featured in the film, who lost their jobs over a dinner party, and as Filipi wrote, “I began to fully appreciate the relationships and friendships Julia and Steve had formed with these people. The mutual respect, understanding and compassion between filmmakers and subjects was palpable and one could only be honored to be a part of this occasion.”

Melissa Godoy, who worked as executive producer on “A Lion in the House,” “The Last Truck,” “American Factory,” and “9to5,” said Julia and Steve respected their employees and crew the same way. “They value our lives, our time, and our families, give recognition, involve us—even the little boys—in everything, and provide opportunities to grow as artists,” she said. “So for a woman who makes films about work and women, Julia Walk is[ed] the walk.”

Reichert was also a professor of film production at Wright State University in Dayton, Ohio, for 28 years, where she mentored dozens of aspiring filmmakers from across the country. “She inspired me in so many ways,” said Brent Huffman, professor of Northwestern journalism, director of Saving Mes Aynak and producer of Finding Yingying. “Julia used to have documentary film nights at her house and would cook us dinner. It wasn’t really a class; it was so much more. She taught me to be brave and never take ‘no’ for an answer.”

Based in the rural town of Yellow Springs, Ohio, an oasis of leftist ideals and home of Antioch College, where Reichert and Klein first met as undergraduates, Reichert worked on many of their projects nearby. “They taught us that some of the best stories can be found in your own backyard,” Godoy said. The Last Truck and American Factory chronicled events around Dayton, Ohio, while A Lion in the House, her Emmy-winning four-hour Verité epic, chronicled five families from the Cincinnati, Ohio area , and her caregivers at wrestling accompanied with childhood cancer.

“A Lion in the House” was particularly close to home, as Reichert’s own daughter, with Klein, had just completed treatment for Hodgkin’s disease at 18 when they began the project. The film took eight years to complete, and shortly before its premiere at the 2006 Sundance Film Festival, Reichert learned even after landing in Park City that she had been diagnosed with late-stage lymphoma. After successful rounds of chemotherapy, Reichert was finally cancer-free. But she was diagnosed with urothelial cancer in 2018 and has been on and off treatment ever since — including preparing for the 2020 Academy Awards — where she took a brief hiatus to win the Oscar.

Reichert will be fondly remembered as a fearless and courageous campaigner for her peers and for liberal causes – from women’s and workers’ rights to Black Lives Matter more recently, as evidenced in her unreleased last film with Bognar, The Untitled Dave Chappelle Documentary – as well as a persistent filmmaker who knows how to capture moments of extraordinary intimacy in combination with complex socio-political issues.

But for the past year, Reichert has spoken in interviews with a sense of joy and hope that he can take a break from filmmaking. “Now that I’m nearing the end of my life, I want to focus on the things I couldn’t do,” she told NPR’s Terry Gross in early 2020, like cooking with her daughter or walking her grandchildren . “Because all films exist for 50 years, they exist.”