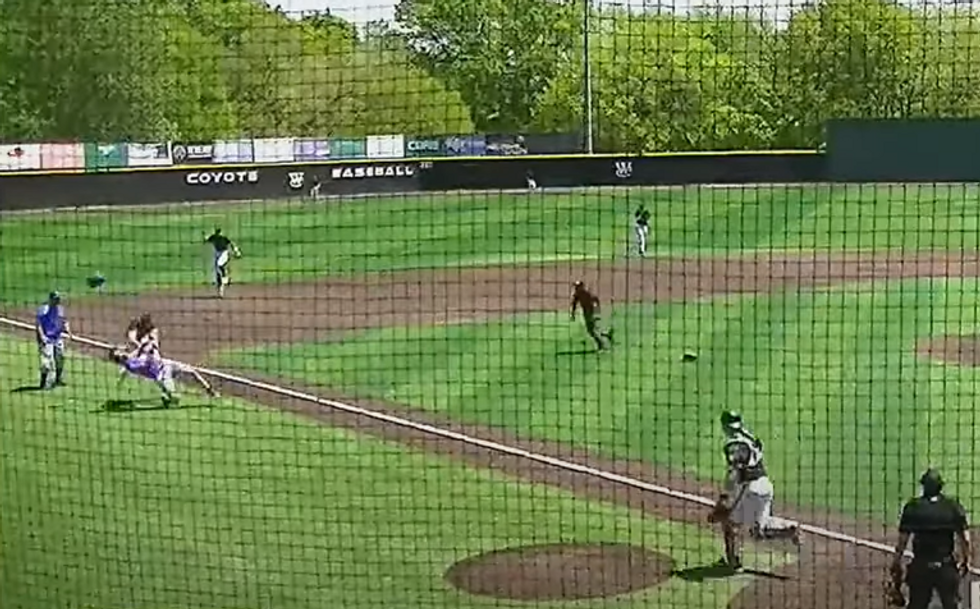 A junior college pitcher is off the team after brutally attacking a rival. The moment the pitcher brutally flattened an opponent was captured in alarming video.

North Central Texas first baseman Josh Phillips hit a home run from Weatherford College pitcher Owen Woodward in the sixth inning of Wednesday’s game. The two-run go-ahead homer gave NCTC a 3-2 advantage. Just as the batter rounded third base, Woodward got angry. The pitcher slammed his glove down and sprinted toward Phillips.

Woodward – a 6-foot-3, 195-pound reliever – dropped his shoulder and severely punched Phillips, as seen in a video shared by TSRN Sports. The pitcher slammed into the freshman baserunner so hard Phillips’ helmet blew up and landed in foul territory about 5 feet away.

Players from North Central Texas rushed from the dugout onto the field to defend their teammate at Stadium in Weatherford – about 30 miles west of Fort Worth.

Phillips managed to touch home plate after the soccer-like hit and subsequent brouhaha.

First, Woodward was suspended for four games by the Northern Texas Junior College Athletic Conference. However, baseball coach and Weatherford assistant athletic director Jeff Lightfoot stated Thursday that Woodward was “no longer on the team.” The coach did not specify whether Woodward left the team or if he was kicked out of the roster.

“We are shocked and disappointed by what happened in our game today,” Lightfoot said in one Explanation On Wednesday. “We do not condone this type of behavior. We have worked hard to build a program with the highest standards. We are deeply embarrassed by this incident and apologize to North Central Texas College and toilet baseball fans. This type of behavior cannot be tolerated.”

Brent Wallace – Chancellor of the NCTC – said the tragic incident would be “used as a teaching moment for our student-athletes to ensure these incidents don’t happen again in the future”.

“The NCTC expects our student-athletes to demonstrate the highest level of sportsmanship both on and off the field,” Wallace called. “We appreciate the integrity of the Weatherford administration in communicating with the NCTC.”