In our interview, the ‘Watcher’ (and ‘The Guest’ and ‘It Follows’) star proves once again that she’s the modern scream queen we deserve.

From indie gems like It Follows and The Guest to sci-fi chill Tau, pitch black Villains or roaring Greta, Maika Monroe has become our modern day scream queen. Her true obsession, however, is working with exciting new filmmakers – most of whom just happen to make brilliant horror films.

“It’s a conversation I’ve had with my team just to be on the lookout for upcoming filmmakers who are doing interesting and different things,” Monroe said in a recent interview with IndieWire. “We’re all trying to keep up with the short films that come out of film festivals and the smaller films. I try to pay attention to that as much as possible. It’s part of my job.”

Monroe was an instant fan of Chloe Okuno after seeing her 2014 short film Slut. Years later, when Monroe received the script for Watcher, she was thrilled to see the filmmaker’s name on the cover. The pair soon connected via Zoom, where they shared stories of how they felt apart living in foreign countries. What’s scarier than real life?

“She had lived in Russia outside of school and I had moved to the Dominican Republic outside of school,” Monroe said. [We talked about] having that real feeling of isolation and loneliness in a country whose language we don’t really speak. And then she told me her ideas for this film and wanted to have that real Hitchcock vibe in it.”

Okuno’s feature film debut, which was a hit on Sundance in January, follows an American actress (Monroe) who moves to Bucharest with her husband and is horrified to find that she is being watched in her new home.

To prepare for Watcher, Monroe screened films ranging from Rosemary’s Baby (another movie with a “The Mansion Is Like Another Character” vibe) to Lost in Translation (which nailed the expat’s uneasiness) . As for the feeling of being watched by someone else, the creepy uneasiness that can come with being a woman in a world, and the fear that it won’t all be understood — Monroe needed no coaching on those points. 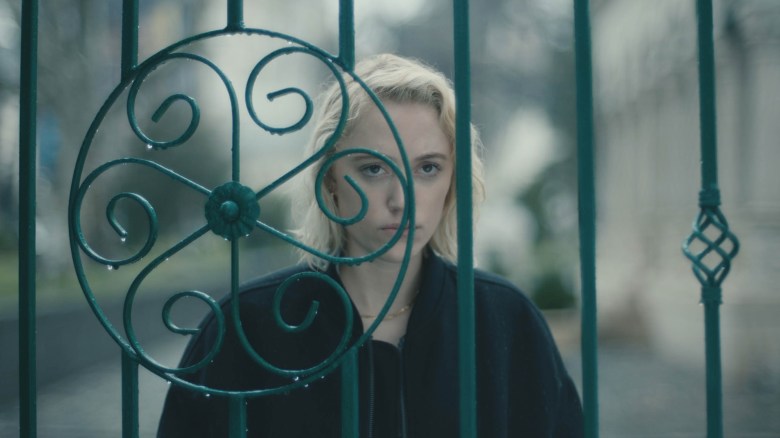 “This story is very down to earth and very realistic and yes, there are elevated moments and thrills because it’s a movie, but it’s a story that everyone, especially women, can relate to,” she said. “It’s absolutely something I’ve experienced, the number of times I’ve put my car keys between my fingers, primed because I can feel someone behind me, or walked down the street and someone whistled at you or looked at you and down. As a woman, you’re just brought up to think that’s normal, and I honestly think with this shift in movies and the #MeToo movement, it’s starting to change where it’s like, ‘No, this shouldn’t be normal .” ”

Okuno’s film builds – with no spoilers – to a smashing ending that nails the concepts on which Okuno, co-writer Zack Ford and Monroe build for 91 suspenseful minutes. “When I read the script, I really didn’t know where it was going,” Monroe said. “But then I love the ending which, without spoiling it, is very blunt.”

The final sequence took three days to shoot, and Monroe felt like she was “constantly on the verge of a nervous breakdown” as she maintained this level of terror. By the time they landed the last shot, Monroe said, she was “just so freaking exhausted. There was just this feeling of satisfaction to have gotten over it. I hope it plays, but there were definitely a lot of feelings that day.”

For Monroe, afraid to play — hell, maybe even being scared – is another day at the office. Learning how to leave it in the office is still a work in progress.

“I’ve definitely gotten better at it,” she said. “I’ve learned that at the end of the day, for my sanity, I need to be able to let it go. A lot of the films I make are very dark and very intense, and it doesn’t do me any good to live in that space any longer than necessary. For these films, I want the characters to be as grounded as possible to do that, [I have] drawing from my own trauma and my own experiences and of course that’s very overwhelming. But for me it is very important to be able to let go.”

Practice creates masters. She grew up “absolutely in love” with horror films and pointed to the Nightmare on Elm Street franchise as an all-time favorite. For Monroe, David Robert Mitchell’s It Follows was the same kind of game changer, the kind of film that showed just how many facets horror can actually handle with styles and scares.

“I got really lucky with ‘It Follows,'” she said. “It kind of changed the game for the horror genre. I think back to the ’60s and ’70s and early ’80s there were some really amazing, sublime horror movies in that genre and then something got lost somewhere and it was hot girls and sex and blood.”

Monroe said she’s still amazed by the enduring power of It Follows, which has served as the first entry in this latest series in the “sublime horror” genre, alongside films like The Babadook and The Witch.

“Of course I had no idea what it was going to be,” she said. “I had seen David’s previous film, The Myth of the American Sleepover, which was so beautiful and so dreamy, and I thought, ‘okay, maybe this style could be very interesting with a horror film,’ but I had no idea, the effect of it and that it [would be] such an important film for so many people, so many years later.”

Monroe recorded her audition for Mitchell herself during the production of The Guest, unaware that both films would be released in 2014 (The Guest premiered at Sundance in January and It Follows arrived at Cannes in May) . That set her course as the scream queen for a new generation. Almost a decade later, rumors of a sequel are still circulating.

When IndieWire spoke to The Guest director Adam Wingard last year, he teased the possibility of a Guest miniseries and alluded to creating an official The Guest 2 soundtrack, which he later released last April. So would Monroe be a game for a real movie sequel?

“One hundred percent!” she said. “I just had so much fun making this film. i love adam I am in love [writer] Simon [Barrett]. Obviously Dan [Stevens] is fucking awesome in this movie.”

But not everything is scary for Monroe, and it doesn’t have to be. Her upcoming slate shows even more variety: currently the “incredibly intense and very different vibes” of Nick Cassavetes’ God Is a Bullet (“I’m covered in tattoos from head to toe and I have a crazy bowl cut”) and the dark one Comedy Significant Other, in which she collaborates with Villains directors Dan Berk and Robert Olsen, opposite Jake Lacy (Monroe is a big White Lotus fan).

So what else does she want to do? Monroe doesn’t miss a beat, laughs. “A light-hearted comedy!”

Shooting outside church leaves three dead including one gunman: police