The ducks are back… sort of.

Bombay, who will not feature this season, has called in his two best men to tidy up the pitch: Fulton Reed and Dean Portman, aka the Bash Brothers (played by Elden Henson and Aaron Lohr, who are making their appearance to repeat Mighty ducks Roll).

Meanwhile, the team trained with the best of the best at the Elite Performance Ice Center in California. The team made their way to attend the invite-only hockey camp with their coach, Alex, who quit her job and planned to return to law school in the fall. To help cover the costs of mentoring the team that summer, Alex took a job as a dorm counselor at the center.

The Ducks drew immediate attention when they arrived late in a battered RV, interrupting Coach Colin Cole’s big speech welcoming the kids to the program. We later learned that Coach Cole – played by newcomer Josh Duhamel – was planning to invite Coach T’s team, unaware of the name change. They may be nicknamed Ducks, but they were still the underdogs. 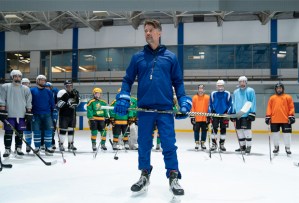 They had a lot to prove, especially now that they were no longer competing as a team. As Coach Cole pointed out, by the end of the summer, everyone was fighting for an individual spot in the hockey world rankings. (Note: if there will be an international competition, does that mean we will also see Team Island?)

In their first Test, the Ducks participated in an icebreaker game with the goal of scoring and preventing others from scoring. The side battled stiff competition that included a confident player named AJ. And while Evan, Sofi and several others did well, Nick fell far behind in the penultimate place. But that was still better than Coach Cole’s son, who to his great disappointment was dead last after missing a shot.

And although it was a tough day for the Ducks, they decided to persevere. Also, their summer officially starts tomorrow morning…at 5 a.m. Fun.

what were you thinking about The Mighty Ducks: Game Changers Premiere Season 2? How do you feel about Coach Cole? Rate the episode below and let us know your thoughts in the comments.