Four-time Emmy winner Neil Patrick Harris on Monday gave a first look at an ominous character he will play on BBC America Doctor Who — to which showrunner Russell T Davies said“Doctor beware!”

“My current appearance. Never looked more dashing,” NPH wrote on Instagram alongside his full character portrait. “Thanks for inviting me to your Whoniverse, @russelltdavies63. I will do my best to do my worst. This doctor has no idea what’s in store for us. And even if he does… who cares? Ha ha ha ha ha ha ha!”

That How I met your mother alaun is currently filming as part of scenes scheduled to air in 2023 Doctor Who60th anniversary.

Showrunner Davies said in a statement: “It’s my great honor to open our studio doors to the mighty Neil Patrick Harris… but who, why, what is he playing? You just have to wait. But I promise you, the stuff we’re filming right now is off the scale. Attention doctor!”

Davis also separately teased on Instagram: “Neil Patrick Harris, welcome to Cardiff! You play as the greatest enemy the Doctor has ever faced. Such a great actor, such a great man, it’s an honor and a shout out. Have fun.” 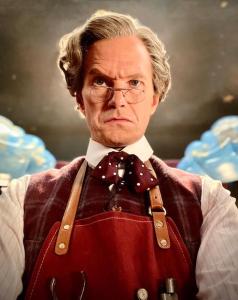 NPH marks the latest fun in casting though Doctor Who‘s upcoming adventure. That was announced in May sex education‘s Ncuti Gatwa will step in as the show’s fourteenth Doctor starting in Season 14. His tenure thus begins in 2023, after Jodie Whittaker ended her reign following another special broadcast later that year.

It was also announced that series alumni David Tennant and Catherine Tate, who previously played the Tenth Doctor and Donna, will join the 60 Story. Or a parallel world. Or a dream, or a trick, or a flashback” – while Yasmin Finney (heart stopper) will play a character named Rose….

Who or what do you think Harris is playing, Whovians?

Stick to "boring" stocks to survive the crater market