Warning: The following contains spoilers for Tuesday New Amsterdam. Proceed at your own risk!

On Tuesdays New Amsterdamwhich took place on the day the U.S. Supreme Court ruled Roe v. Wade, one of the hospital’s doctors had a very personal connection to the issue of abortion.

Speaking to a group of students interested in pursuing a medical career, Dr. Lauren Bloom that she had two abortions. The first took place after she was drugged at a college party and woke up in a stranger’s bed with no memory of what happened. The second was when her relationship with Dr. Floyd Reynolds ended five years ago.

“I fell in love with someone who would have made a great father, but he told me I didn’t fit into his future,” Lauren admitted as Reynolds watched.

At the beginning of the episode, Reynolds was upset by the revelation and that Lauren hadn’t told him about it at the time she became pregnant, but she claimed it wasn’t a big deal.

Acknowledging the idea of ​​the episode’s writer, Shanthi Sekaran, executive producer Aaron Ginsburg told TVLine, “It was clear early on that we wanted one of our characters to have an abortion and … that it wasn’t going to be that big of a deal in their lives. That was super important for Shanthi and all the women in the room to basically show that it’s no big deal. This is a life decision that should be made between a woman and her doctor. And so we decided that we could use that experience and her relationship with Reynolds to present her [that] and how a man can best be an ally.”

Showrunner David Schulner adds that the writers’ room reflected Lauren and Reynolds’ own discussions. “The women in our writing room had very specific and passionate issues they wanted to address that were frankly rebuffed by other white men,” Schulner shares. “Like Shanthi’s idea of ​​an abortion [is] ‘no big deal.’ I think a lot of people found it easy to take Reynolds’ point of view, ‘What do you mean, it’s no big deal?’”

“We had a line that we had to take out on time, but it was Bloom who said to Reynolds, ‘I had hemorrhoids two years ago. Should I have told you about my hemorrhoids too? Would that have made you feel better?’” Schulner continues. “These are medical decisions and some of them are very clear decisions that need to be made. And so there were a lot of issues that the women in the room wanted to address, that our characters wanted to say, that wanted to be featured on national television. So at a certain point we stepped back and the women told us what they wanted to say… So while you’re speaking to us, it’s very important that everyone knows that there was an equal, if not unequal, partnership in this episode. “ 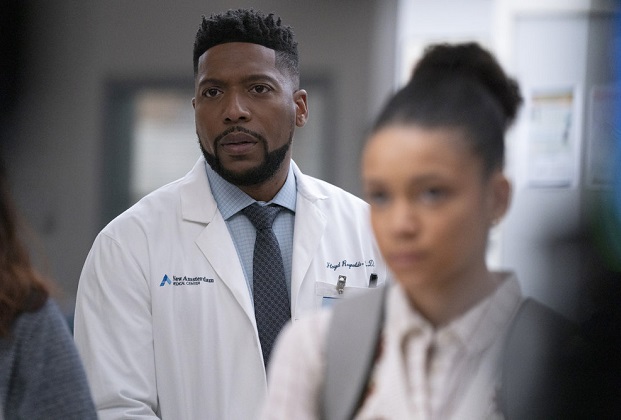 As for the surprised look on Reynolds’ face when Lauren said she had fallen in love with him, that look wasn’t written. “It’s all Jocko [Sims]’ says Schulner. “It’s so great that they’re writing the episode with us. We didn’t know what kind of look we were going to get from Jocko, but because we got that look it deepened her story so much more. How, oh my god, he had no idea. And I think as writers we had no idea Lauren was falling in love with Reynolds until we wrote that five years later.”

Adds Ginsburg, “It compelled us to look at their relationship when we used that as a plot for this episode, and as we explored it, we made discoveries about them that we didn’t know.”

But don’t expect the confession to spark a resurgence in Lauren and Reynold’s romantic relationship. While Ginsburg admits that the idea “pops up in the room a lot” thanks to Sims and Janet Montgomery’s chemistry, it’s not on the agenda for the show’s swan song.

“We talked about what we wanted for their final travels of the season and it wasn’t high on the list at the end of the day. We wanted to explore more this season of what being a family means for all of the characters,” explains Ginsburg.