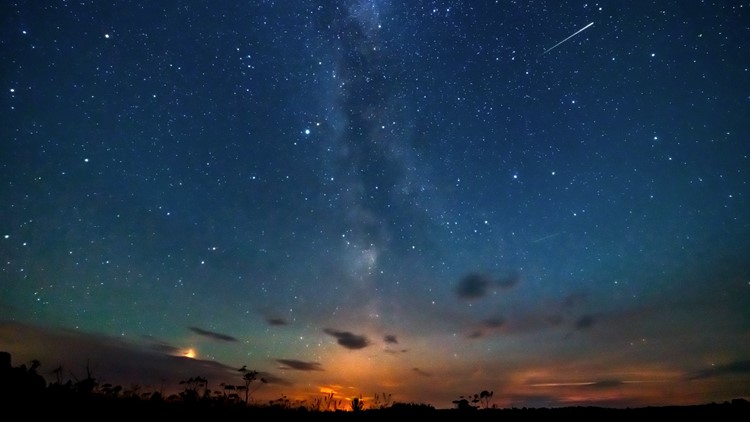 A dazzling meteor shower is upon us thanks to the famous Halley’s Comet.

The Orionid meteor shower will be active from September 26 to November 22, with a peak in the early hours of Friday, October 21. Says NASA This shower is considered “one of the most beautiful meteor showers of the year”, known for bright, fast shooting stars that leave long glowing trails.

Fast meteors like the Orionids can sometimes even leave “fireballs” or longer bursts of light in their wake. (One such meteor startled Seattle last week.)

Read on to learn more about the shower and how to watch it.

What are the Orionids?

This meteor shower is caused by space debris from what is arguably the most famous comet of all time: Halley’s Comet, which takes 76 years to orbit the sun just once. It hasn’t been seen by casual earth stargazers since 1986, NASA says it will return in 2061if you want to add this to your calendar.

The comet is named after the English astronomer Edmond Halleywho correctly predicted his return.

Halley’s Comet sheds streams of ice and dust each time it orbits back through the inner solar system, resulting in two distinct annual meteor showers.

“The Eta-Aquarids are the outgoing particles of Halley’s Comet and the Orionids are the incoming ones.” American Meteor Society said editor Robert Lunsford, adding that both showers have a nearly two-month active period. “Halley’s Comet has flown through the inner solar system so many times that many particles have spread.”

RELATED: Could there be life on Mars? Scientists say it’s possible it once was

Estimates of how many meteors you might see per hour vary, with NASA predicting 15 and AMS predicting 10 to 20. Because of the long active period of the Orionids, these peak rates are expected to last longer than other showers.

“That’s what’s so special about this long-term shower — it has a plateau-like maximum,” Lunsford said. “So if you miss the night of peak activity, the night after, and even a few nights after, is well worth watching.”

The Orionid meteor shower has surprised viewers in the past. AMS says that in 2006 through 2009, the shower’s peak rates rivaled those of the stunning Perseids, which can emit an average of 50 to 75 meteors per hour.

RELATED: The best skywatching events of 2022 not to be missed

How to watch the meteor shower this week

The Orionids peak in the early morning hours between Thursday and Friday.

NASA recommends observing in the hours between midnight and dawn, away from city lights if possible. A lawn chair or sleeping bag will help you settle down while your eyes adjust to the dark – this takes about 30 minutes. As experienced stargazers know, some patience is beneficial.

“Watch for at least an hour … Because there are peaks and troughs of activity, a in all meteor showers,” Lunsford said. “They could be out there at the wrong time and not see anything. And then, over the next five or ten minutes, you’re going to see all sorts of activity.”

How to find and defeat the Fortnite Inquisitor Boss