It’s been two years P Valley last one took us “down in the valley where the girls get undressed” and the girls from Chucalissa, Miss., FIGHT – just like the rest of us! The pandemic has even hit the fictional town, and everyone’s favorite strip club has shut down as a result. Meanwhile, Uncle Clifford has proven that neither she nor Hailey, the new owner of The Pynk, can be stopped by a pandemic. The new business partners have introduced Chucalisa residents to a new way to shake wings and ass: a drive-through strip club aka P—yland. 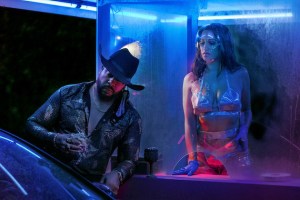 As innovative as P—yland’s business model is, the girls still struggle financially. And Uncle Clifford’s mismanagement of the $250,000 Hailey gave her to save the club isn’t helping. The club also lost most of its top dancers, including Gidget and Keyshawn. Gidget moved back home after losing her mother to COVID, and Keyshawn – now that she drew a gun on Diamond, she’s no longer welcome among the girls. However, with the success of Lil Murda’s single, she was fairly booked and busy.

With Hailey as the new HBIC, there is tension in her personal relationships with Uncle Clifford and Mercedes; both show little interest in answering her. Also, Mercedes feels she deserves more financial compensation than the other girls. As soon as Uncle Clifford and Hailey want to fight about money again, they are distracted by the loud cheering of the girls outside: the lockdown is over! Of course, that means The Pynk is reopening and there’s more money to be made. Before the news gets through, they also learn of the death of Tydell Ruffin, Chucalissa’s first black mayor. The news has Hailey and Uncle Clifford wondering what his death will mean for the city’s big casino plans.

Back in Atlanta, Andre, the mayor’s godson, learns of the politician’s death through a series of text messages, including one from his former lover, Hailey. His wife is concerned that he is traveling to Chucalissa to attend the funeral; As a frontline worker, the pandemic has taken an emotional toll on her. The two live in separate rooms in her home, and she’s taking all the necessary COVID precautions and then some. She asks him to come to the wake early and avoid attending the funeral. He agrees, but when he arrives in Chucalissa his plans quickly change.

When we last saw Mrs. Woodbine she had stolen her daughter’s money to buy a church. Two years later, and Mercedes’ mother has her church – and she’s coming with billboards. Because of the pandemic, the service is out, but business appears to be booming.

Things are going well for Lil Murda too – musically at least. Murda has texted Uncle Clifford for the past 5 months but she has not responded to any of his texts. Although he is unlucky in his love life, he is focused on his music career. Lil Murda has a hard time believing that the Hood loves him. For example: While outside making a quick sale when a car pulls up in front of him, the aspiring rapper is automatically on the defensive. But the men in the car compliment Murda on his music and drive off to belt out his latest single. Intending to capitalize on the current popularity he and Keyshawn have built, Lil Murda and DJ Neva Scared are working on his next single. He proposes a tour of Keyshawn, but she quickly declines. Recently, Instagram Live has allowed her to entertain more than 400,000 fans from the comfort of her home. Her new setup also makes Derrick happy as he has more control over who she interacts with and where she is. Using the need for diapers as an excuse, Keyshawn finds a way to sneak out of the house to visit Diamond. Unfazed by her tearful apology, he ends up turning her away from his shop because she doesn’t have a mask.

Once enemies, Mercedes and Hailey are now roommates, and their work drama haunts them home. After hearing Mercedes lobby for more money, Hailey tells her she will get a percentage of the door when the club reopens. This doesn’t entirely satisfy Mercedes, but she accepts the offer. However, things take a left turn when Hailey continues auditioning new girls, though Mercedes doesn’t approve of the plan. Threatened with renewed energy as the club’s Beyonce, Mercedes has yet to realize what the loss of Keyshawn and Gidget has meant for The Pynk. We also learn that with Hailey’s help, Mercedes was able to save her gym. But the pandemic has presented her with a new set of problems. Some of the girls’ parents cannot afford membership, and others worry about whether or not it is safe to practice again.

Finally, the former mayor is buried in the blackest, southernmost way possible – bright colors; fancy outfits; long, honest speeches; and a menu people are willing to die for. Though Uncle Clifford misses the service, she makes her way to the Ruffins house, dressed smartly, to sample some famous chitlins made by Mookie, Tydell’s third baby mama. There she meets Andre and Wayne Kyle, the new interim mayor. Kyle announces that he plans to fulfill the mayor’s request for a casino in Chucalissa. In a teasing (but actually serious) way, Uncle Clifford threatens to take on the young millionaire.

We then find out that Lil Murda’s tour is indeed on and that the “Dirty Dozen Tour” will hit 12 cities over 12 nights and feature Lil Murda and Keyshawn. Looks like P Valley Season 2 will bring us an epic tour – and hopefully an equally epic mayoral run.

Now it’s your turn. What do you think of the season two premiere? Rate it via the poll below, then post your thoughts in the comments!

As the country focuses on guns, several people have been stabbed at a medical facility