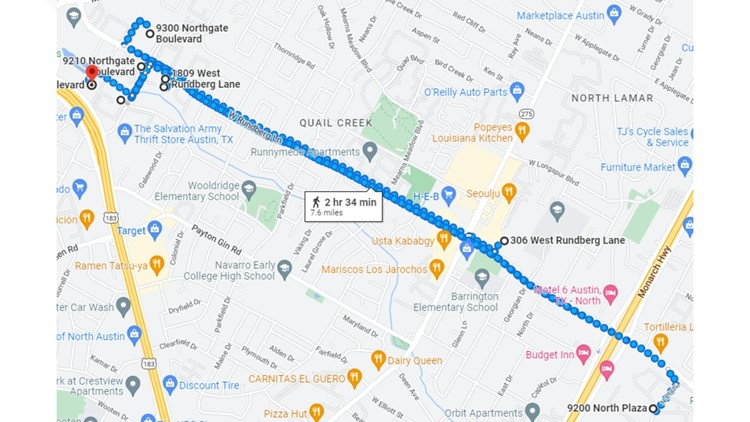 Police have warned area residents to be extra vigilant about their surroundings as some victims were seriously injured and hospitalized.

AUSTIN, Texas – The Austin Police Department is searching for a suspect believed to be behind a series of at least nine robberies that took place between September 19th and October 4th in North Austin.

Police said the incidents occurred on Northgate Boulevard, along blocks 300 to 1800 of W. Rundberg Lane, North Plaza and Research Boulevard.

The suspect is described as a black male, possibly in his 30s, between 6ft and 6ft tall, 3″ tall and of stocky/muscular build. He wore dark clothing and a face covering, and sometimes wore gloves.

A machete, gun, and bat were used throughout the series of robberies.

Police have warned area residents to be extra vigilant about their surroundings as some victims were seriously injured and hospitalized. Most of the victims were Hispanic or did not speak English, APD said.

The suspect was seen testing doorknobs at various complexes in the area as well as car doors.

APD urges the public to:

Anyone with information regarding the robberies or suspects is asked to contact police at 512-974-5092 or Crime Stoppers anonymously at 512-472-TIPS.

What is Yom Kippur? What you need to know about the holiest day of the year in Judaism

https://www.kvue.com/article/news/local/north-austin-robbery-series/269-3e05d33c-6e57-4a7c-b4dd-0bcaf1835290 Police are looking for a suspect in connection with 9 violent robberies in North Austin